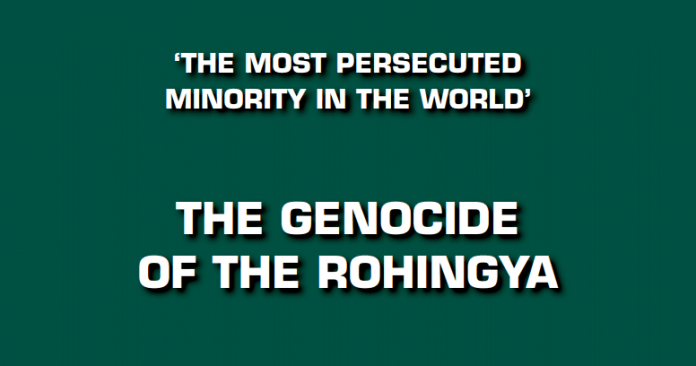 1. This report focuses on the way in which the international crime of genocide is being committed against the Rohingya with impunity by the state of Myanmar, in particular, its military. It also details how crimes against humanity are being perpetrated. The Islamic Human Rights Commission has collected evidence from Rohingya refugees in Bangladesh regarding atrocities committed on and around 25 August 2017. The report also considers the history of persecution of the Rohingya, contextualising the international crimes that have and are currently being committed.

2. Our report shows that the three elements of the international crime of genocide are present in violence committed against the Rohingya. They are a group, there have been genocidal acts committed against them, and these acts have the intent to destroy them in whole or in part.

3. The crimes committed against the Rohingya also amount to crimes against humanity. Our report shows how the violence meets the legal threshold for crimes against humanity. We show that there have been widespread and systematic attacks against civilian populations, the acts committed fall within the definition contained in Article 7 of the Rome Statute, and there is a state or organisational policy to commit the attacks.

4. The Islamic Human Rights Commission makes the following recommendations based on its findings: 1.The international community should pressure the Myanmar government to immediately stop attacks against the Rohingya and anti-Muslim violence in general by groups in Myanmar. There are also Hindu Rohingya that have been persecuted and displaced. 2. The UN Security Council should refer the matter to the ICC Prosecutor in accordance with Article 13(2) of the Rome Statute. It is clear that Myanmar is unwilling and unable to investigate the crimes itself. 3. IHRC welcomes the ICC Prosecutor’s request for a ruling from the ICC on whether it may exercise jurisdiction over the deportation of Rohingya to Bangladesh, under the crime of deportation (the enforced displacement of individuals across an international border), 1 and recommends the ICC Prosecutor’s continued investigation into crimes against humanity and the crime of genocide committed in Myanmar. 4. In support of the recommendation given by the UN High Commissioner for Human Rights, IHRC suggests that the UN Human Rights Council make a recommendation to the General Assembly to establish a “new impartial and independent mechanism… to assist individual criminal investigations of those responsible.”

5. UN mandated International Observers should be sent to Arakan State, which may discourage further attacks and can provide the international community with reliable information.

6. The international community, including ASEAN and the UN, should urge the government of Myanmar to abide by the decision of the UN General Assembly’s human rights committee of 12 November 2013 to grant citizenship to the Rohingya, allow the internally and externally displaced to return, and cease all forms of discrimination and abuse against them in particular and Muslims and other discriminated minorities in general.

7. The international community should support governments in the region in abiding by the international law of nonrefoulement by protecting refugees and asylum seekers, allowing them into their country and not removing them to Myanmar where they are in danger of further persecution.