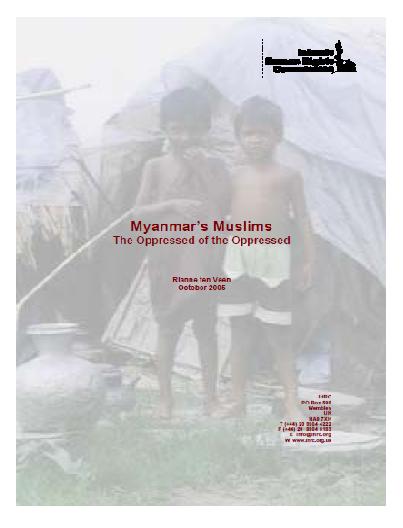 The report can be downloaded at the end of the page or here.

Although this report was mostly compiled in 2004, recent events in Myanmar have been acknowledged throughout courtesy of the reporting of the Kaladan Press Network list (www.kaladanpress.org). As we go to press, their latest report outlines the gang rape of a pregnant Muslim woman returning from a UNHCR feeding programme who was gang raped in Rathedaung Township of Arakan State by soldiers and as a result gave birth to a still-born child at the scene.

With so many places in upheaval and so many causes to support, even the cause and culture of human rights is affected by the cause celebre and some crises get far more attention than others. Where Myanmar is well-known, it relates to the long and painful pro-democracy struggle led by Aung San Suu Kyi, the persecution of activists and the forced labour of the masses. Religious discrimination against various minorities has been less well-understood and in a post 9/11 world, predictably the Myanmar military junta has further cracked down on Muslims.

This report seeks to bring the plight of Myanmarese Muslims to light and guide activists to relevant campaign groups, literature, news and organisations as well as encourage original, new and participatory campaigns. At a time when religion is being demonised and those professing faith – usually Islam – deemed fanatical and by extension worthy of ill-treatment, it is imperative that the cruelty and horror of religious hatred is acknowledged and its victims given due consideration.
——
NB since the publication of this report a further organisation Burmese Rohingya Organisation UK (BROUK) has been set up and provides further resources.

Genocide Memorial Day to focus on "sanitisation of genocidal acts"