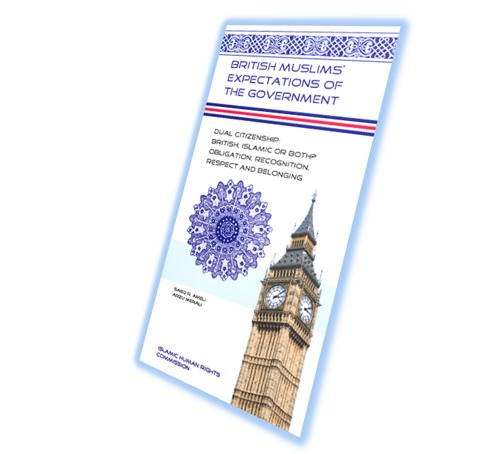 A summary can be found at [LINK] or below:

Background to the Report and Project:
The report is the first of eight in the series British Muslims’ Expectations of the Government. The series aims to chart the key areas of concern for Muslims are and what they as participants in the social order expect the government’s engagement with them to be.

The project looks at citizenship as not only a series of ‘rights and obligations’, but also comprising the ‘need for recognition’ and the ’emotional’ elements. Without the latter two elements, discussions aimed at fostering civic values and dynamic, inclusive citizenship are in vain, and could lead to long term social fragmentation.

Research findings:
Responses to the surveys were wide ranging, from expressions of high affiliation to negativity, of high religiosity to extreme secularity. Some of these findings:

• Islam and Good Citizenship – the majority of respondents saw no contradiction
• The majority felt there was none or no serious respect for Muslims either from the government or majority society.
• Whilst satisfaction with the UK was high, the higher the level of education the lower the level of satisfaction
• Religiosity and affiliation – Higher levels of self-perceived religiosity saw almost equally nuanced positive and negative correlations. Lower religiosity produced more extreme results of high satisfaction or dissatisfaction.

Reasons for high and low affiliation to the UK were also charted and these included:

• Relatively greater religious freedom
• Britain as the country of origin

Reasons for neutrality and negative responses

• anti-Muslim foreign policy
• Islamophobia, the climate of fear and racism
• a deeper understanding of Muslims
• facilitation of Muslim religious practices/ education
• equal involvement in society
• participation in political processes
• Facilitation of engagement with the Government

‘Dual Citizenship: British, Islamic or Both?’
Recent debates surrounding citizenship have directly impacted on Muslim communities. Muslims are decried as disloyal by virtue of some of their perceived religious beliefs. Their marginalisation is often blamed on their own lack of affiliation to the UK. Worse still Muslims are often charged with ingratitude to their government and wider society.

Muslims show two affiliations which seem to be but are not in fact paradoxical i.e. affiliation to Islamic and British civil law. This needs to be recognized and understood by implementing ‘comprehensive social and political policy’, these two sources of affiliation can function as complimentary elements. However failing to understand this can become a source of social distance and even contradiction.

The researchers used responses from qualitative surveys to interrogate the precepts of the quantitative survey based on previous studies of citizenship. The following summarises key findings to these questions

What citizenship means to British Muslims
• Respondents expressed a tremendously varied attitude and understanding of the concept of citizenship
o Some interviewees defined citizenship as a complex of responsibilities with a sense of attachment to British society and social rights
o Other responses reflected the findings of the qualitative research carried out for the Home Office Citizenship Survey which suggested that people had difficulties with the word ‘citizenship’ and they almost ‘universally’ equated it with nationality
• Positive responses ranged from:
o overt expressions of pride
o understanding citizenship as empowerment to benefit society
o sense of belonging and responsibility
• The majority of responses attest to the complex cultural identity of British Muslims who are attached to their faith as well as possessing a sense of belonging to Britain.
• Some responses also reflected a deep cynicism or suspicion the significance of citizenship for Muslims.
o Either they felt there is no phenomenon ‘British Muslim Citizen’ and / or
o they were dissatisfied by the segregation between Muslim and non-Muslim as citizens or any other categorisation which would lead to a heterogeneity in terms of social policy

British Muslim: Multiple Identities
Respondents defined ‘British Muslim’ as those Muslims:
o who live in Britain
o those who are born and grow up in British culture
o or hold British nationality and citizenship

For some respondents, the term ‘British Muslim’ is a nationalistic idea that goes against the notion that a Muslim is linked by virtue of his/her faith to other Muslims all over the world

Notably despite the overwhelming emphasis on diversity of Muslim communities in the UK by most respondents, there were many responses that indicated an attempt to overcome such fragmentation by describing a common Muslim experience in the UK, which is characterised negatively by demonisation,. Discrimination and aggressive targeting by government, media and policy makers.

Recognising Muslims in Britain
The researchers employed the terms ‘respect’ and ‘recognition’ in order to explore the emotive dimensions of citizenship.

Most expressed their understanding of this to be related to a sustained environment of suspicion about Islam blended with an ethnic prejudice which barred their recognition as equal members of society.

Partial Recognition
Respondents generally felt that whilst they may be accepted as British citizens in theory, in practice they were still ‘outsiders’. Attitudes were multi-dimensional, with some taking into account historical developments, and other respondents feeling that there had been some improvement.

However nearly all sensed that Muslims, particularly those visibly identifiable as such, were regarded suspiciously.

The British Muslim Citizen: Content or Discontent?
• 30% of respondents endorsed their satisfaction with living in Britain
• 27% expressed their dissatisfaction
• 43% remained either neutral or could not give a clear expression of their feeling
• As with previous research the lower the income, the less satisfaction.
• Significantly, even the highest figure of satisfaction expressed by high income earners is only 40.5%.
• Further, the higher the level of education the lower the satisfaction.

In response to the questions: “As a British Muslim, do you feel happy in Britain? Why? Why not?” respondents who felt ‘happy’ in Britain listed their reasons as falling within three overarching categories:
o Britain provided a tolerant and democratic environment for religious practice
o Britain was their home;
o Britain offered greater freedom than other European countries.

The primary reason for respondents who felt little or no support from British policy makers towards British Muslims was due to the lack of legal protection for Muslims from discrimination, similar to legislation protecting other religious communities.

British Muslim community loyalty: Home or Abroad?
o Respondents believed they had the right to disagree with the government and to support Britain when they felt it was doing the ‘right’ thing.
o Blind support for Britain was dismissed
o Specific demonstrations of support included paying taxes, supporting the country in international sporting competitions and support in times of national crisis
o However, some respondents stated they would not support Britain in times of war, or in the “war on terror” due to their perception that this was a war against Muslims
o Alienation and lack of support was expressed on the basis of Britain being an anti-Muslim establishment.
o Those who strongly denied any support to the country did so as a protest against the war and current policy in Iraq and the ‘anti-terror’ campaign in general

Major Anxieties of Muslims in Britain
These fell into three categories:
o Extremist Islamophobic agenda of various institutions
o Likewise the media and organisations
o A concomitant degree of misunderstanding about Islam in British society

Ideal Religious Environment
In response to the question, “What is the ideal environment for Muslims to practise their religion in Britain?” respondents generally described an environment in which:
o They were free to practice their religion without interference from the government or society; where their needs, e.g. prayer and hijab, were facilitated;
o where they would not be prejudiced against and demonised as terrorists or disloyal citizens

o Greater consultation and dialogue with the community in all its diversity and on many issues not just minority issues
o Encouraging greater Muslim participation in the political process and refraining from tokenism in public appointments
o Accommodating the meta-loyalties of Muslims in open and frank foreign policy debate that includes open criticism
o Dispelling the climate of fear and challenging Islamophobia through legislative protection inter alia against discrimination and hate speech
o Equal treatment and protection as other minorities under the law
o Raising awareness about Islam in wider society and help to dispel myths
o Tackling social deprivation and ensuring faith tolerant practices.

Methodology and Sample Group
• The survey was undertaken across England, Wales and Scotland.
• The total of quantitative responses was 1125, and qualitative 37.
• The qualitative surveys were undertaken in 15 different localities across England, Wales and Scotland.
• The diversity of Muslim ethnicities was represented across the survey.
• Respondents’ ages reflected the predominantly youthful make-up of the British Muslim community.
• Approximately 90 percent of our respondents are British citizens and 55 percent are born in Britain.
• The majority of respondents saw themselves as practising Muslims