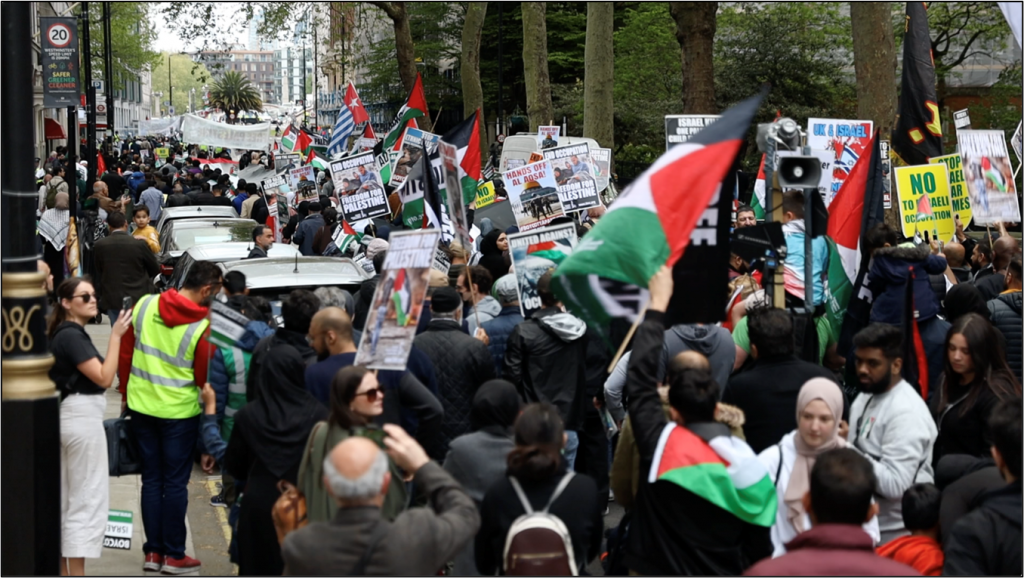 After a break of two years due to Covid-19 restrictions the al-Quds Day Rally in London returned in a passionate and optimistic mood, at a time when peaceful worshippers are being attacked in the al-Aqsa Mosque in Quds/Jerusalem. Despite the break and continued fears of Covid at least 7 thousand people attended the march from all different backgrounds and representing all three major Abrahamic religions, alongside atheists. In line with the London Quds Day tradition, a long Palestinian flag 70m long was paraded down the street being held from both sides. 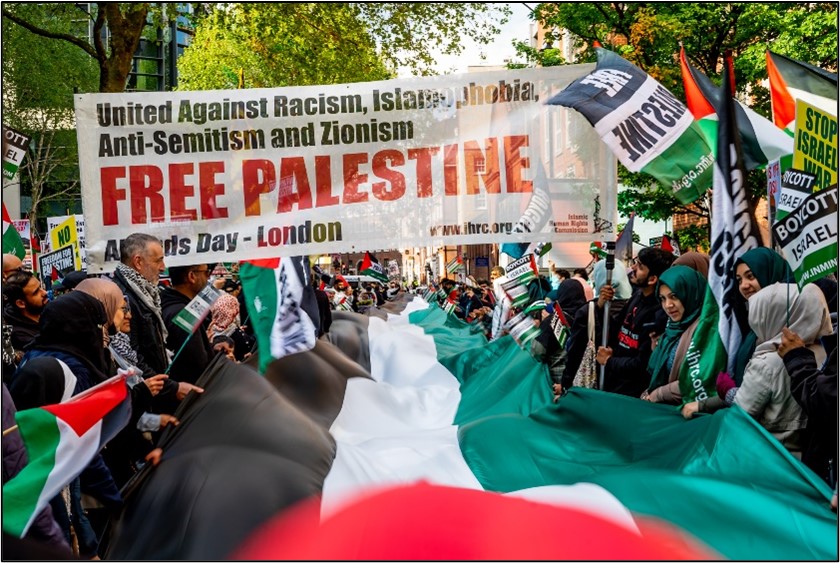 The march started at the Home Office and then proceeded past parliament, where a counter demonstration of around 10-15 Zionists was being held. This was a dramatic drop in numbers as in the past the counter protesters, which had consisted mainly of the far-rights groups English Defense League and the Football Lads Alliance, has reached over a hundred people. This dramatic shift has shown that Zionist opinion is collapsing, and is starting to no longer be seen as acceptable within public opinion. It eventually reached Downing Street, where thousands stayed for speeches by guests representing different organisations. 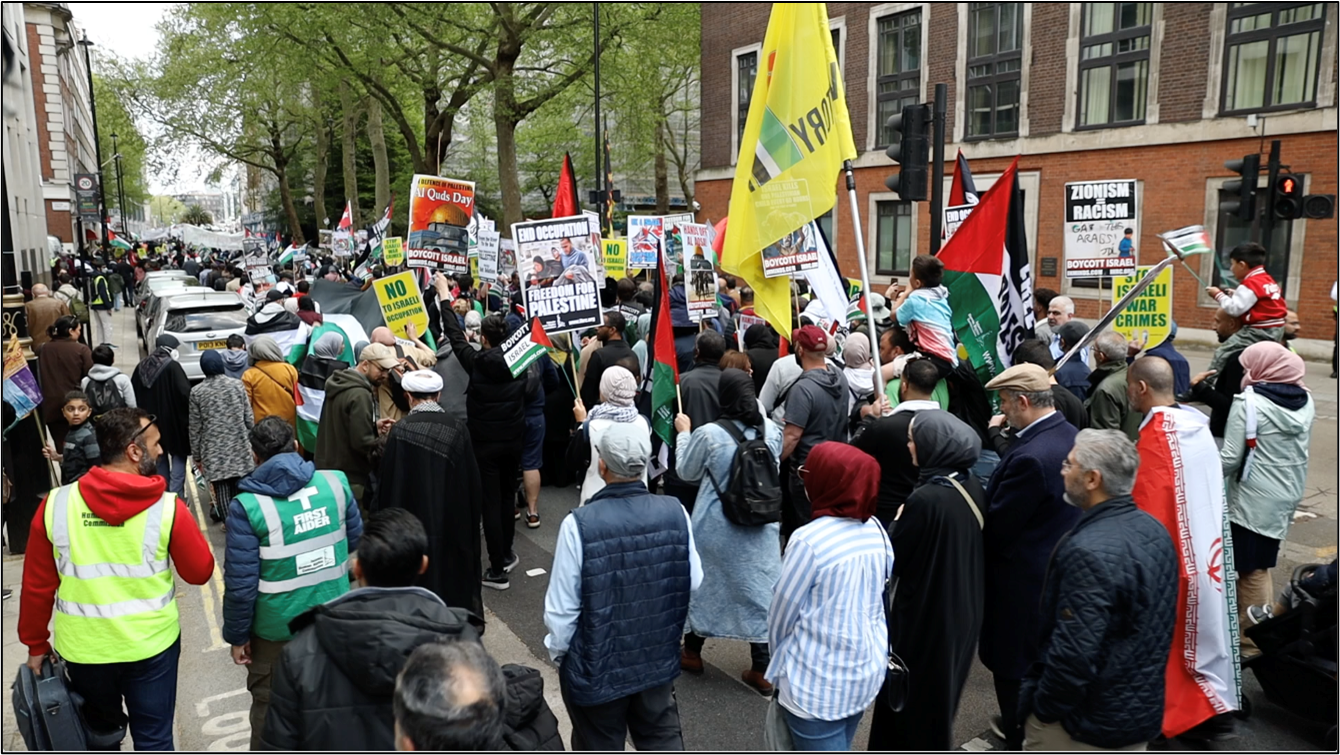 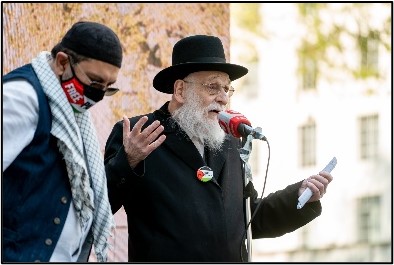 The first speaker was Rabbi Ahron Cohen, from the Haredi Jewish organization Neturei Karta, formed in Palestine in the 1930’s it has always stood against the Zionist ideology. Rabbi Cohen spoke about the Jewish theological opposition to Zionism. “Zionism has only been in existence for 120 years, Judaism has been in existence for thousands of years. Zionism is a secular, oppressive, murderous philosophy. Judaism is a compassionate and peaceful way of life that has been in existence for thousands of years. Judaism totally opposes the idea of a state for Jews in Palestine. Palestine belongs to the Palestinians, yes the Jews have a right to live there as they have lived with Palestinians for hundreds, possibly thousands of years lived in peace, but not in the way which involves taking over the country and oppressing them.”

Next was Reverend Frank Gelli of the Church of England, who spoke about heroes of the struggles for justice and finished with “Zionist injustice, oppression, cruelty will not triumph, but God will, our cause is just, it is a cause of God”.

Syed Taqi Razvi spoke next about standing with the oppressed and recognizing the oppressor, saying that we will not forget or forsake our first Qibla, and that we must not forget that our “liar prime minister” and “bully home secretary” are complicit in the oppression of the Palestinians. 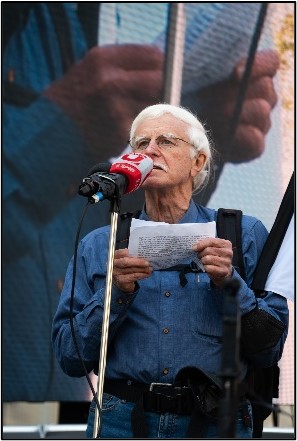 Professor Haim Bresheeth-Zabner, the son of holocaust survivors, from Jewish Network for Palestine then spoke. He told the crowd that this year Ramadan, Passover and Easter have all fallen in the same time this year, and that this is a reminder of the life shared in Palestine of Jews, Christians and Muslims, and that even the crusaders did not destroy the unity between them. He also added that the cause of the unity between faiths in both Spain and Palestine were due to Islamic law. He said that on Quds is a city holy to all three faiths, and at a time when these three festivals of peace have fallen on the same time, rather than see the peace that all three festivals and religions represent we have seen a “terrible crime, which will be punished by history” by the Zionists at the al-Aqsa Mosque. He then gave other examples from the past of where Muslims, Jews and Christians have lived together in peace, after which he also spoke of how these examples had inspired him and others to setup the new Convivencia alliance for Palestine which shall be launched on 8th May https://www.ihrc.org.uk/new-middle-east-peace-initiative-seeks-to-harness-spirit-of-spanish-golden-age/ . 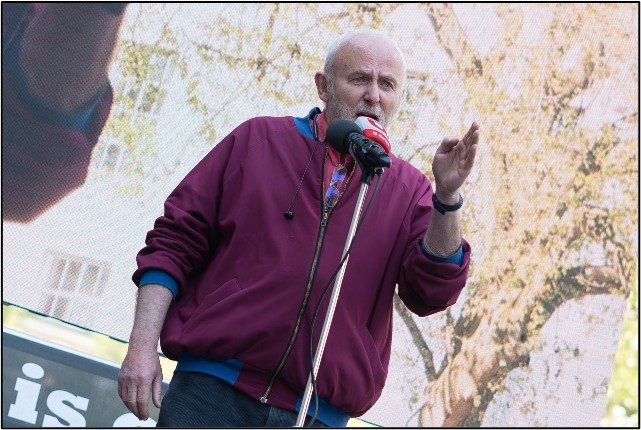 Mick Napier of Scotland’s Palestine Solidarity Campaign spoke about the racism and crimes of the British government. He spoke about how when the Mafia boss Joseph Colombo created the Italian-American Civil Rights League, in order to accuse any investigation into the crimes of the Colombo Mafia Family of discriminating against Italians. He continued to say: “We don’t hate Italians, we hate the Mafia. We don’t hate Americans, we hate American militarism. We don’t hate Jews, we hate Zionism.” He also said that after the European Union did an opinion poll on views of Europeans about Israel, the EU apologized to Israel for the opinions of European people, as public opinion has become so strongly anti-Zionist across the continent, and the EU even promised Israel that the opinions of the European people will not influence European foreign policy, but that the people must keep pressure up and force the governments to conform. Mick also praised the organization of the Islamic Human Rights Commission, comparing it to the organizing by the UK government, saying that by these standards Muslims should be running the country. 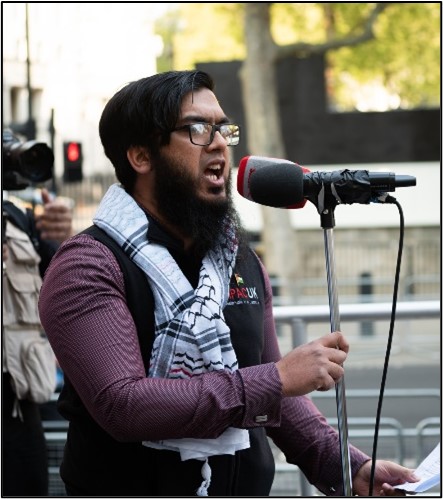 Ahammed Hussain from the Muslim Public Affairs Committee then spoke about how the protestors had come here, some from far away, out of our love for Palestine, but: “we think we love Palestine now, but just imagine once Palestine is free, how will we feel then.” He also spoke about the amount of work that we would have to do in order to create a free Palestine, and that it is worth struggling and sacrificing for, that we need to transform the love we have for Palestine into actions for “If Palestine could be freed simply by the love in our hearts it would be the freest country on Earth.” He finished by saying that the Zionists fight against us is only possible because they have the support of politicians, and therefore we must unseat Zionist politicians.

A young Palestinian activist Ibrahim Essad then spoke demanding the Zionists reveal how they dare to come into one of the holiest sites in Islam on a Friday and vandalize it and terrorize those worshipping there and how dare they: “step on the mats that we put our head, with your filthy Zionist boots.” He spoke about hunger strikers in Palestine, who had not eaten for a hundred and forty days in protest to the system of detention by the Zionist regime. “Every single person here would be in prison, under administrative detention just for flying the flags of Palestine that we see.” Before he finished with another message for the Zionists: “You can murder a liberator, but you cannot murder liberation. You can murder a revolutionary, but you can never murder revolution!”

Next Nathan from Fight Racism, Fight Imperialism spoke reminding us that the Parliament we had marched past was the seat of Imperialism, which had signed the Balfour Declaration promising the Zionists Palestine, “and still this month, our foreign office in Britain calls itself a friend of Israel”. He reminded the crowd that the Labour Party is not a friend of Israel, and that Keir Starmer (whose name was booed) has “Called it a disgrace to call the Israeli state an apartheid state).

Ethan from Palestine Action then spoke about how it was Britain who supplied the weapons to the Zionists in the 6 Day War, and British weapons are often used in Palestine. Therefore, we need to continue shutting down weapons factories with direct action, as they did in Oldham.

Massoud Shadjareh, from the Islamic Human Rights Commission spoke last, saying how pleased he was that so many people had turned up, especially whilst fasting. He reminded the crowd of the UN Conference on Racism in Durban, South Africa, were the IHRC had gone with a report identifying Israel as an apartheid state, after which the NGO Forum voted unanimously that it was, “Israel walked out, United States walked out of the conference and since then we have seen Human Rights Watch, B’Tsalem, Amnesty International, and indeed within the last month at the UN in Geneva again it was reestablished and confirmed without any doubt about the fact that Israel is an apartheid state. That has a significant legal implication, every state needs to fight and challenge that apartheid system.” He continued to say that you cannot reform an apartheid system, rather what you must do is remove it completely, just as we did in South Africa. 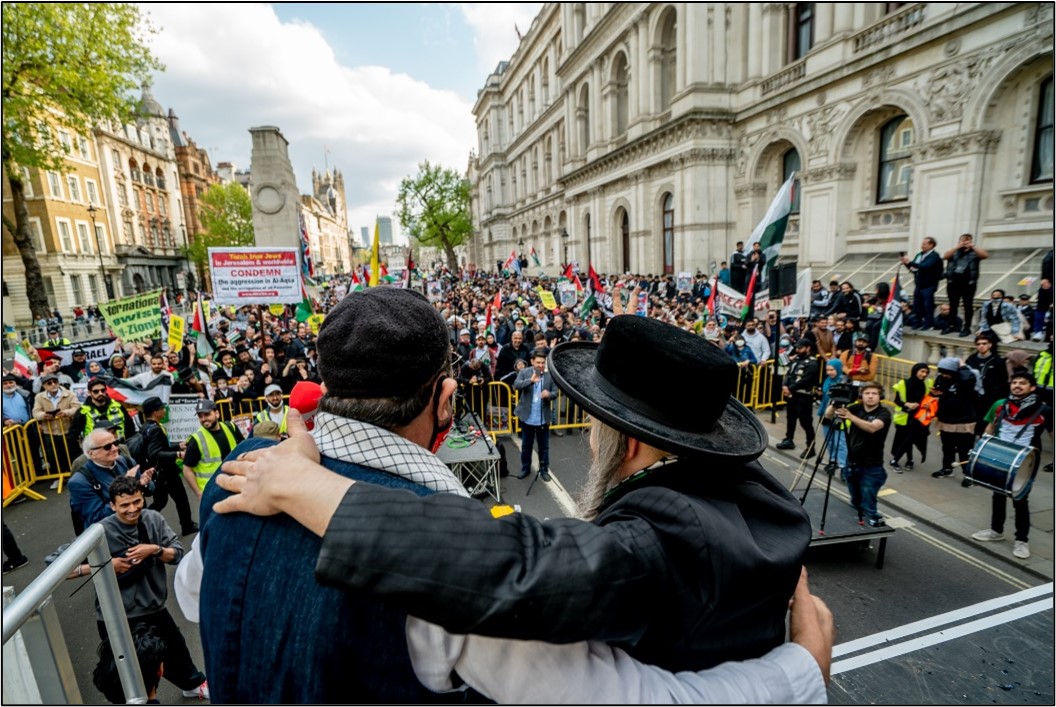 The International al-Quds Day Rally is observed in many countries across the World, with large rallies often taking place in Palestine, Pakistan, India, Iran, Iraq, Syria, Lebanon, Indonesia, Nigeria, the United States and Canada, amongst other countries. The most heartwarming of these was perhaps in Yemen, whose people are themselves suffering war as a Saudi led coalition has terrorized the country, yet they held Quds Day Rallies across the country, with a particularly large one in the capital Sanaa.  Originally started to unite all Muslims around the World in protest for the Palestinian rights, it has evolved to include people from all different faiths and no faiths. The day itself is on the last Friday of Ramadan, however in the West the rallies take place on a Sunday due to Friday not being part of the weekend in Western countries, this year it was the Sunday before Quds Day as the Sunday after may fall on Eid. This years event was supported by various groups including In Minds, Scotland Palestine Solidarity Campaign (Scottish PSC), Muslim Public Affairs Committee UK (MPACUK), Black Activists Rising Against Cuts (BARAC), 5 Pillars, Neturei Karta, Black Lives Matter Coalition, Idara-e-Jaajeriya, BAME Lawyers for Justice, Muslim Community of Essex, Islamic Human Rights Commission (IHRC), Ahlul Bayt Islamic Mission (AIM), Jewish Network for Palestine (JNP), Cambridge Stop the War Coalition, Scotland Against Criminalising Communities, Muslim Student Council, Imamians UK, Lebanese Community Scotland, Union of Islamic Students Associations in Europe, Football Against Apartheid and Ahlul Bayt Society Sisters.

To watch the march, which was streamed live click: 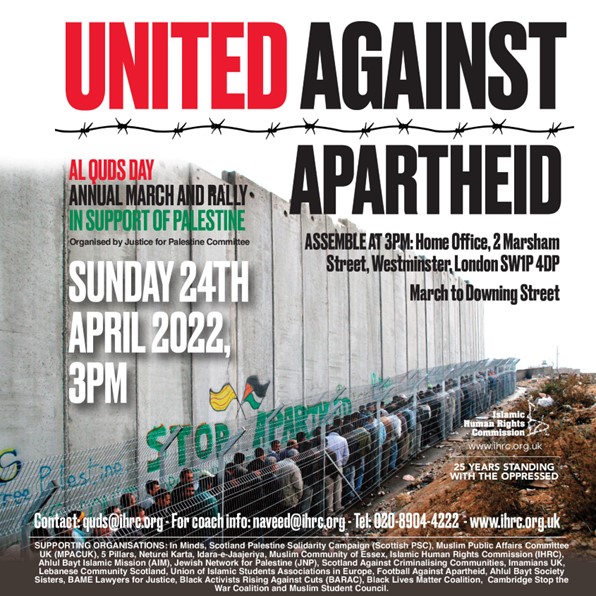 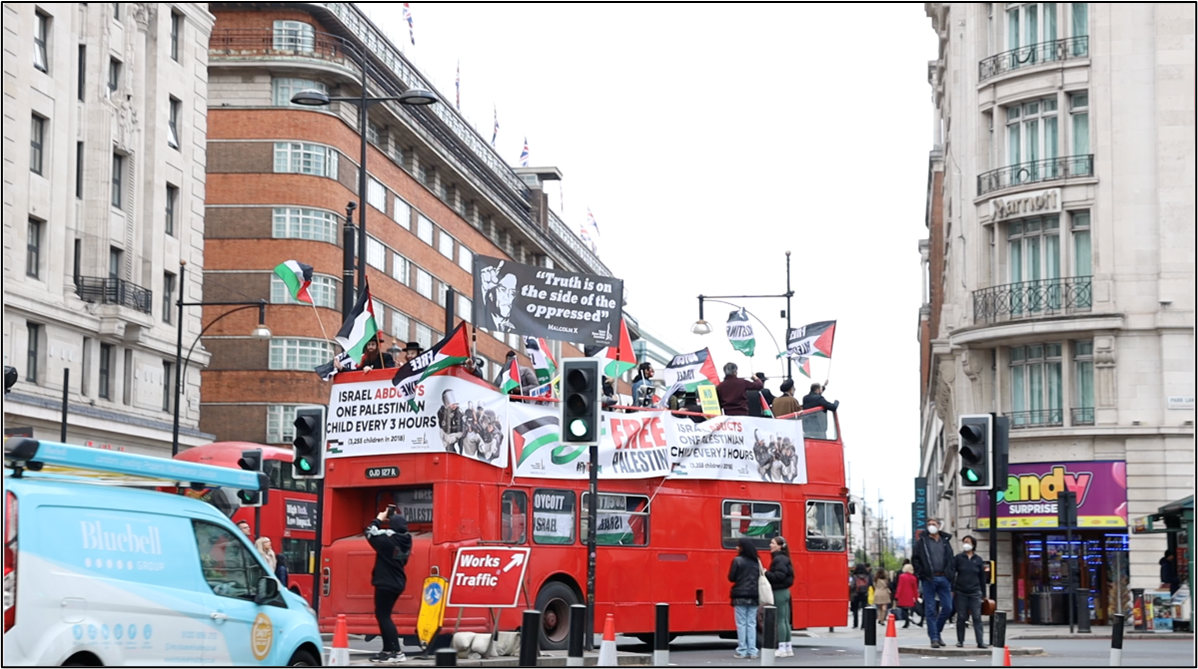 Despite doing the march on the Sunday before International Quds Day, that did not mean that the actual day passed by without any events. The al-Quds Bus Ride, a recent tradition, which was originally started during the lockdown as the usual march was impossible, has been continued due to the popularity and success of it in the past. 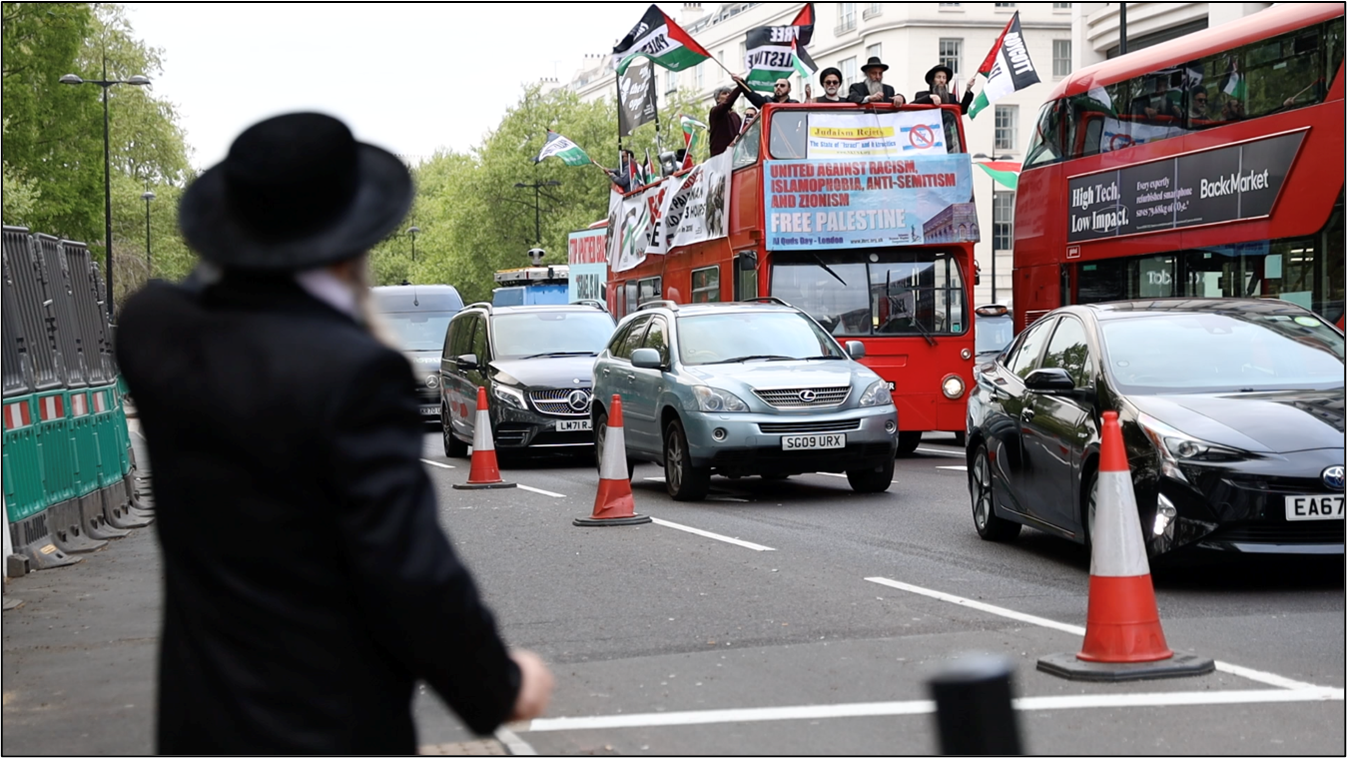 The open top bus was draped in Palestinian flags, as well displaying banners with statistics and facts about the situation in Palestine. Present on the bus were members of the Islamic Human Rights Commission, Neturei Karta, RMT Black Members, In Minds, the Ahlul Bayt Islamic Mission and the Black Lives Matter Coalition. Starting in Staples Corner, it rode down Edgeware Road to central London, after which it encircled both Marble Arch and Parliament Square three times, before moving on past Downing Street and Trafalgar Square. All the while the bus played pro-Palestinian music or the participants were engaged in common Palestinian chants, such as the popular “From the river to the sea, Palestine will be free”. 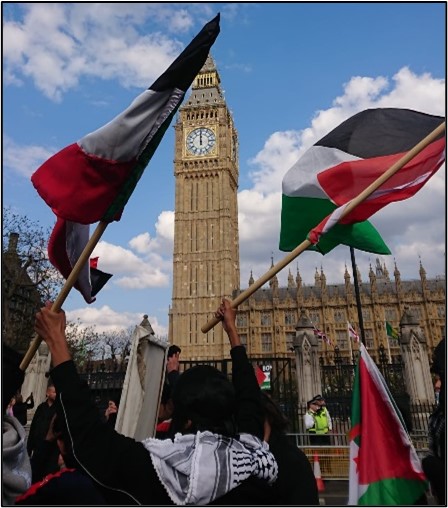 There was a tremendous response from the public, many passers-by were waving, dancing, chanting and filming for social media, and even the news channel PressTV covered the story. The videos of the speeches are available at: https://www.youtube.com/playlist?list=PL0BCSWzStP7VIAwcbH1LhuCzqOkszrgNR