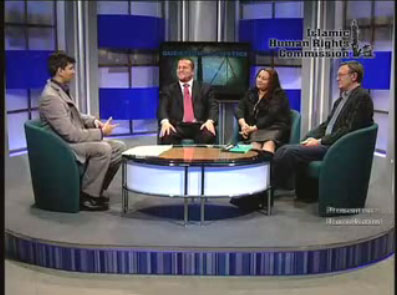 Racial and Religious Profiling (Broadcast 4 May 2008)

Plus an interview with Lord Nazir Ahmed

This show looks at religious and racial profiling and asks whether in today’s world such policies are still wrong. Racial and religious profiling in the post 9/11 world has been argued by many as a ‘necessary evil’. It has ben suggested that to prevent mass terrorism, targeting people who share certain ethnic and/or religious characteristics has to be done. Opponents argue that all the reasons that have led to racial and religious profiling in the past still pertain. You cannot, it is argued, justify suspicion of criminal intent based on a person’s ethnic or religious characteristics.

Plus an interview with Nick Hardwick, Chair of the IPCC.

Rroma, Gypsies and Traveller Communities in the UK (Broadcast 13 April 2008)

This show looks at the experiences of the rroma, gypsies and traveller communities in the UK and asks if these groups are the forgotten victims of racism in the UK. All three communities have been a subject to intense media scrutiny in recent years. A visit to even a BBC forum page where viewers have their say reveals that many in the wider society regard travellers, gipsies and rroma to be problematic communities claiming amongst other things that they have high levels of criminal behaviour. Activists claim that this represents stereotyping and discrimination and simply creates further prejudice against a marginalised community that have suffered greatly.

This show looks at the case in the USA known as the Jena ‘6 and asks whether there is a need for a new civil rights movement in America and perhaps beyond. Almost half a century has passed since the time of leaders such as Martin Luther King and Malcolm X. Whilst activists argue that racism in the USA leads to the denial of many basic rights in the USA, others point to the success of African-American personalities such as Condoleezza Rice and those of other non-white ethnicities and argue that much has changed in the USA and there is no longer a need for the radicalism of the 1960s and 1970s.

This week the show focuses on arguments around prejudice in majority cultures. Specifically we will be looking at the idea of Islamophobia in English literature. Is there such a thing as demonisation and misrepresentation of Muslims in books as diverse as Bridget Jones Diary, Jane Eyre and Reading Lolita in Tehran? If so, is this really a human rights issue? Can and should art in any form be subjected to the scrutiny of ethical and legal norms?

We welcome all your comments and suggestions at samira@ihrc.org
{jathumbnail off}