Racists Totally Freak Out Over Muslim ‘Batman of Paris’ 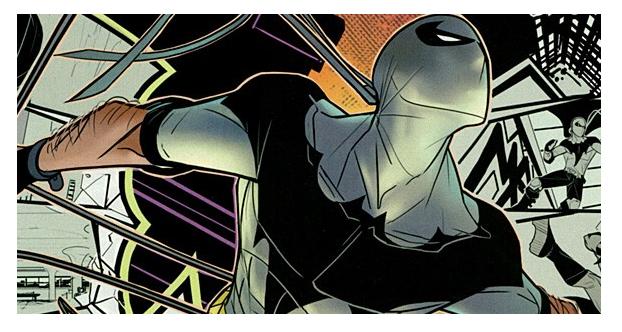 {jathumbnailoff}Another day, another racist freakout over non-white superheroes. But unlike the hilariously dishonest racism we saw when the Council of Conservative Citizens called for a boycott of Marvel’s Thor movie on account of a mythical Norse god’s depiction as a black man, a recent round of conservative attacks on Nightrunner — DC’s Muslim Batman of Paris — are prejudicial in a more insidious way. While the CCC put forth a laughably tenuous justification for their outrage, it was with respect to one specific character in one specific context. The argument against Nightrunner, led by conservative blogger Warner Todd Huston, is based on the bigoted belief that a Muslim superhero is by definition an exercise in deceitful political correctness, and that Muslims are natively evil.

Introduced in this month’s Detective Comics Annual #12 and Batman Annual #28, Nightrunner is a 22-year-old Algerian Muslim who’s lived in Paris his entire life (it seems reasonable to assume he was born in France, but at the very least he was raised there). Born Billai Asseiah, the character is uncommonly adept at the highly YouTubeable gymnastic form known as parkour. That and Asseiah’s sense of justice make him an ideal recruit for Bruce Wayne’s new Batman, Inc. initiative, whereby he franchises Batmen to cities all over the world.

Huston views French Muslims — which is to say, immigrants or those descended from immigrants — as inauthentically French, and, as such, that Batman would choose a Muslim as Paris’ champion is gravely offensive to him and his loathsome ilk.
DC Comics has decided that the “French savior,” the French Batman is to be a Muslim immigrant. The character’s name is Bilal Asselah and he is an Algerian Sunni Muslim and an immigrant… Apparently Batman couldn’t find any actual Frenchman to be the “French savior.”

…it is pretty condescending to France, too. France is a proud nation. Yet DC Comics has made a foreigner the “French savior.” This will not sit well with many Frenchmen, for sure.
What we really hope will not “sit well” with Frenchmen and Frenchwomen is Huston’s ugly assertion that French identification is exclusive to non-immigrants (read: white people). If Huston had said something similar about Americans — “Yeah, yeah, Asians, Latinos, whatever. You’re American but you’re not AMERICAN” — he would not find himself so gleefully echoed by other right-wing racists like Avi Green, who wrote at The Astute Bloggers (in a piece called “Batman Hires an Islamist”):
How about that, Bruce Wayne goes to France where he hires not a genuine French boy or girl with a real sense of justice, but rather, an ‘oppressed’ minority who adheres to the Religion of Peace. And this is a guy whose very parents were murdered at the hands of a common street thug!”
Setting aside the irony of these bloggers sticking their necks out for the same white Frenchmen they doubtlessly condemned as cowards or worse when France opposed the U.S. starting a war in Iraq, the ferocious racism in Huston and Green’s remarks is nearly matched by their pronounced ignorance. It is because of France’s imperial history and its laws regarding the legal immigration of former subjects and those born in former French territories (like Louisiana — Gambit can run for President in France!) that the country finds itself with such a diverse population today, with a particularly large Arab demographic. In other words, Batman could hardly swing a batarang in Paris without hitting a Muslim, and that has been the case for decades.

For racists concerned about the quota of white men in Batman, Inc., it should be noted that there are at least three caucasian Batmen running around at the moment: Bruce Wayne, Dick Grayson, and Britain’s Cyril Sheldrake. Comics are a visual medium where variety is the spice of life, so I’m willing to go out on a limb and say that until comic book creators can indicate a French accent without using unreadable phonetic spellings, we can do without a fourth white Batman who looks exactly the same with his mask on as the other three.

However, Green points out that Bruce Wayne has set a precedent for sponsoring “indigenous” Batmen from their respective areas, starting with Mr. Unknown in Japan. He writes, “…it’s funny how someone who recruited an indigenous Japanese combatant for his operation can’t do the same in France… Now that this has happened, one can only wonder if Bruce Wayne will go next to the Gaza Strip and recruit a Muslim who thinks him/herself oppressed not by the Hamas, but by the Israelis,” which is a remark I don’t think we’ll ever really understand. It doesn’t matter, though, for Avi Green cries crocodile tears for the spurned indigenous white men of France and their Batman franchise birthright. Should the Dark Knight go on to recruit an Arab Muslim whose family’s lived in Baghdad for centuries, Green would probably still wonder whether a Muslim Batman would “bring justice to the streets by setting disabled women on fire.”

Green’s hideous remarks convey incredulity as to the crime fighting qualifications of Muslims, but Huston doubles down on the disgust and writes that a Muslim hero is patently ludicrous because Muslims are apparently congenitally terrorists.
…in this age of international Muslim terrorism assaulting the whole world, Batman’s readers will be confused by what is really going on in the world. Through it all DC makes a Muslim in France a hero when French Muslims are at the center of some of the worst violence in the country’s recent memory.

The true cause of the riots and violence between Frenchmen of European stock and that of immigrant Muslim stock is glossed over as if it doesn’t even exist. DC Comics makes the whole problem as simplistic as mere racism as if that is all there is to it ignoring the fact that Islam is the single most important factor in the strife.
Huston refers to the civil unrest France saw in late 2005, when a state of emergency was declared after Muslim youths began rioting in Paris and other cities, burning thousands of cars and several buildings. Huston, Green and other bigots in the conservative media read the tragic situation as an expression of nefarious Islamic purpose, but most commentators and reporters who followed the event described a matter having more to do with social inequality than religion. As is the case in America, where there have also been riots, the economic and social underclass of France is populated largely by minorities and immigrants, and many of those immigrants are Muslims. 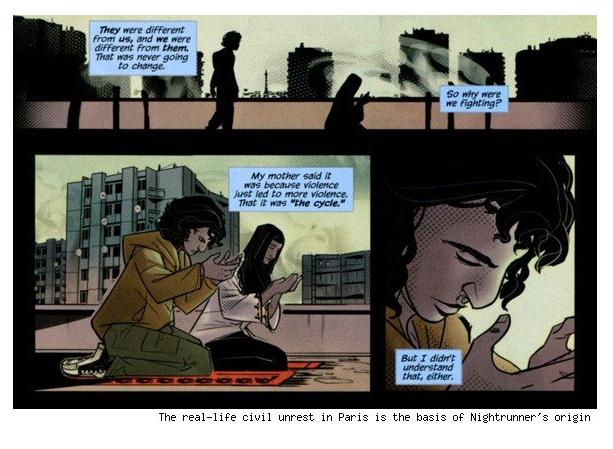 Contrary to Huston’s claims that DC whitewashed (heh) the sociopolitical realities of France, the story of Nightrunner — which we strongly suspect Huston didn’t actually read — begins in the Clichy-sous-Bois area of Paris, accurately depicted by writer Kyle Higgins and artist Trevor McCarthy as a hotbed of immigrant frustration. The young Bilal Asselah tells us he can’t remember a time when people weren’t rioting and setting fires, but his pious Muslim mother has obviously kept the boy on the straight and narrow path. Unfortunately, 16-year-old Bilal and his best friend accidentally run afoul of some police officers who confuse the young men for rioters, and Bilal ends up in the hospital. His mother manages to talk Bilal down from the ledge of revenge, but his friend is not satisfied and is killed by French cops after burning down a police station. It’s this event that opens Bilal’s eyes to the terrible cycle of violence his mother had tried to protect him from, and he weeps.

As he grows older, Bilal’s instincts are to take some kind of action, but he can’t think of what to do that won’t cause more violence in his community. Instead, he teaches himself parkour, which beyond calming him down also gives the neighborhood something to talk about besides riots. But when a series of high profile murders appears ready to claim an inspirational Muslim musician and ignite the ghetto once again, Bilal puts on a mask and sets out to stop the unthinkable from happening.

What Huston calls “PCism run amok,” we in the business call an awesome superhero origin story about adversity and character. What’s more, it is not at all incongruous with reality, as Huston claims. Like a lot of young men in France, Bilal Asselah was one pissed off Muslim. His best friend burned down a building! He’s witnessed firsthand what the cycle of prejudice and violence can do to his city, but rather than give in to hate and fear, he’s literally rising above it — just as Batman swore to make his city safer for innocent people and just as Spider-Man swore to use his abilities for good. Even the Batman himself mistakes Bilal as some kind of troublemaker at first, but upon recognizing the heroic spirit in the young man, offers him a place in Batman, Inc.

Nobody is trying to pretend that a Muslim person has never committed a terrible crime or that many atrocities are not based in religious reasons, but to invoke accusations of “political correctness” and “islamic supremacism” when a creative work dares to present these most vilified of people in a positive light does nothing but manufacture more loathing and controversy, which obviously fuels the Internet and the discussion we’re having so enjoyably now. What racists like Avi Green, Warner Todd Huston, the Council for Conservative Citizens and the protesters of “The 99” animated series don’t care to understand is that by sheer force of will, superhero comic books and animation have amassed a significant amount of political and cultural capital with which to reflect and impact these complex themes — otherwise these people wouldn’t even be talking about them. This is the only storytelling genre where it is not only allowed but practically required that all problems have solutions that can be found when people simply follow the better angels of their nature.

At the end of the Nightrunner origin story, two young children — one light-skinned, one dark — take turns putting on a homemade mask and playing Le Batman de Paris. Hopefully, that will also be the real-life ending to this disgraceful media episode.

Andy Khouri is the Associate Editor of Comics Alliance.

This piece is courtesy and (c) Comics Alliance.