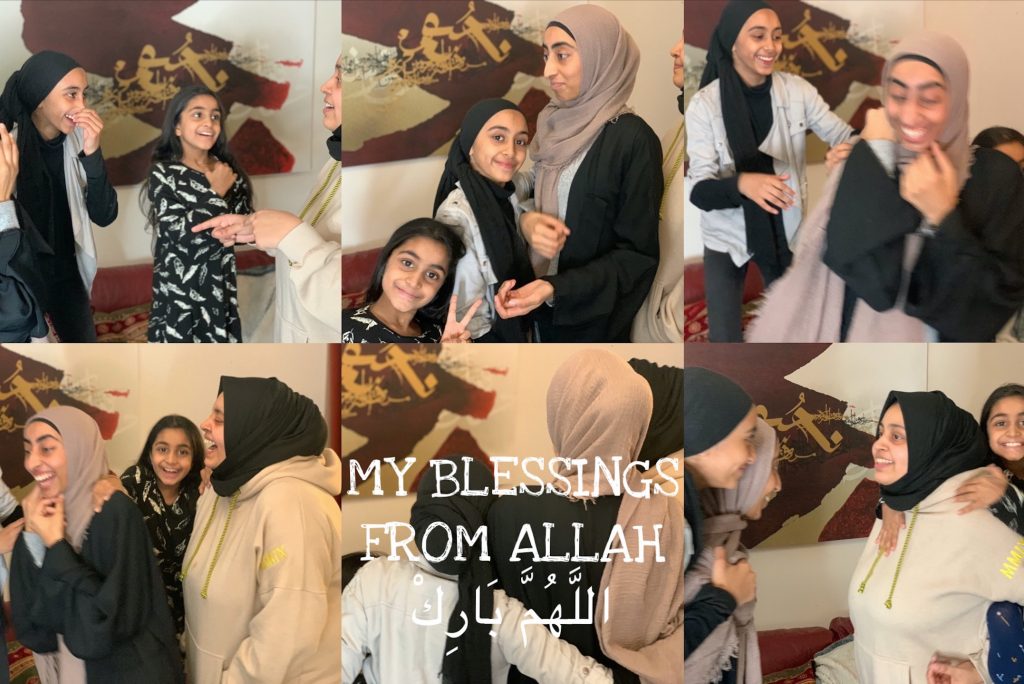 I dedicate this blog to my daughters.

Unlike me they, at a very young age, had to adorn the hijab and face challenges in their life that I hadn’t faced. And me being their mother expected them to get on with it as part and parcel of life, not really appreciating what they as young kids had to go through being Muslim growing up in a western materialistic, Islamophobic world.
To this day I remember when my 10 year old, back in 2005, turned to me one day and said, ‘Mum, I don’t want to wear the hijab anymore, when I go to school tomorrow, I won’t be wearing it’. I scolded her and told her that under no condition was she to leave the house without her hijab or she would face the consequences. I didn’t question her as to why she felt that she couldn’t wear hijab anymore, I didn’t consider her feelings, all I cared about was the religious obligation for her hair to be covered no matter what.

The next morning I was standing at the top of the stairs as she walked past me, she had her uniform on, but no hijab.

My heart ached as I watched her defiance unfold before me, would she dare leave the house?  I remained silent.

As she walked down the stairs towards the front door she glanced up and noticed my tears. She stopped, turned around and stomped back upstairs and charged into her bedroom. A few minutes later she came out of her room, red faced, but wearing her hijab. She gazed quickly at me and with a forlorn look in her eyes bid me farewell, before quietly leaving the house on her way to school.

I wiped my tears.

Had I succeeded in making my child understand why she had to wear hijab? No, I don’t think so.

Had I succeeded in making her wear hijab out of guilt? Perhaps.

But one thing I didn’t do, was to explain my reasoning behind such commands in a calm manner, instead, I dictated. I didn’t invite my child to ask me any questions as to why she had to dress in such a manner and neither did I leave room for negotiation. We are Muslim and that’s how we dress. This is our identity. Full Stop!
And so did that lead to arguments between me and her during her pre-teens? You bet they did!

Inner modesty? Understanding the why behind the way Muslimah’s dress so that when they dress in a modest fashion, they dress knowing that this is their identity as a Muslim and they are proud of the way that they look, it’s pleasing to Allah and that’s all that matters.

But I hadn’t taken into account what my daughter was going through. She was at a western school, surrounded by non-muslim kids. They were allowed to flaunt their hair, wear make-up and wear the tightest of clothes and yes they looked good. My daughter was exposed to bill boards, music, films etc and even though I made sure that she attended a girls only school, there was a boys only school right next door, which certainly didn’t help!

She was innocent with her wants and needs. Her hormones were raging. She was at an age when friends meant more to her than her parents. And at this time, when she was most vulnerable, she needed me more than ever. I promise you that as I write this blog, 15 years later, I still well up with tears thinking of what I put her through as a parent, her mother, her supposed shoulder to cry on.

She needed me to keep calm, nurture her, understand the turmoil that she was unknowingly going through, torn between pleasing her friends and adhering to her religion. She needed me as her parent to understand her wants and needs more then ever.

It was hard for me at first to understand why my daughter didn’t just ‘get it’ when it came to dressing and behaving modestly, after all it was easy for me I thought. But that said, I was 29 years old when I first started to wear wear my handkerchief style hijab!

Eventually, through lots of duas, Islamic parenting and relationship videos, parenting classes and a book that I read called, ‘Blame My Brain’ by Nicola Morgan. I calmed down and began to understand that if I wanted a fruitful, meaningful and spiritual relationship with my child, as a parent, it was necessary for me to give her a helping hand, little by little, one step at a time.

Allah has blessed me with five daughters Alhamdulillah, with quite a bit of an age gap mind you. So when I was done with bringing up one, it was the turn of the next one and each one of them have brought about their own unfolding drama and unique experiences, all of which I will eventually share with you one day Insha’Allah ~ esp since I’m still going through the process with my youngest being only 8 years old.
But my take home for now from a religious perspective would be, it’s a no-brainer that raising modest kids in a western non-muslim society is not as easy as one thinks. Our children are faced with challenges galore, so as a parent the best that we can do is to understand what they are going through, give them love and empathy and take time to explain things to them in a manner that they understand and appreciate. And certainly we must practice what we preach and never forget the power of a parents dua.

Finally, most importantly, when your child comes of age and you know in your head and heart that you brought them up to the best of your ability and on the deen, then take a chill pill and relax a little. Try not to blame yourself, like I did, for any of their wrong doings because as you would have explained to them when they were young, they are now accountable for themselves.

“The slaves of the Most Merciful are those people who constantly say: “Our Lord, make our spouses and children the coolness of our eyes – a source of peace, comfort, tranquility, and happiness for us – as a gift from You – and make us, together as a family, leaders of the righteous people.” (Qur’an 25:74)