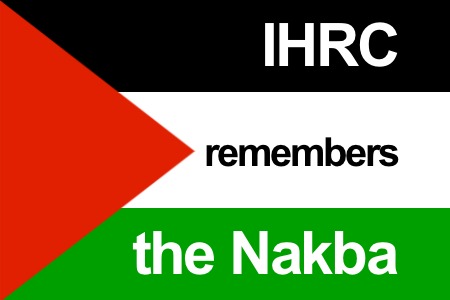 As the anniversary of the Nakba is upon us, please take a minute to reiterate your commitment to the Palestinian struggle for liberation. Below are some links to some free on-line resources, events you can attend, and books you can buy that increase your knowledge, help the struggle and donate towards a good cause. All the books listed are reduced in price on 15 and 16 May.

The following article, ‘What does Israel want?’ by eminent historian Ilan Pappe was written in 2006 after the summer war for the web journal and sister project of IHRC, Palestine Internationalist. Pappe traces the impact of the Nakba on contemporary events and some of his predictions are remarkably prescient to the situation today.

The sixth war between Israel and the Arab world, like so many other cases in history, has a complex background: the long term history of the Zionist presence in Palestine is one way of explaining what occurred on Lebanon’s soil in July and August that year. A closer look at the specific Israeli policies in the previous six years is another. This long term history is discussed in the first part of this article and it is connected, in the second part to the more immediate background leading to the destruction of Lebanon and the Gaza Strip in the summer of 2006.

Join the IHRC and Inminds regular vigils for Palestinian prisoners. Keep updated via the Events page for the vigils here.

Books from the IHRC Shop

There are many resources available on the IHRC On-Line shop from a map of Palestine showing the areas of depopulation, to books of statistics on the same. The following resources have been discounted, and a commemorative map of the Nakba will be sent free with any order (it can be bought separately here:

The Ethnic Cleansing of Palestine by Ilan Pappe Between 1947 and 1949, over 400 Palestinian villages were deliberately destroyed, civilians were massacred, and around a million men, women, and children were expelled from their homes at gunpoint. Denied for almost six decades, had it happened today it could only have been called “ethnic cleansing”. Decisively debunking the myth that the Palestinian population left of their own accord in the course of this war, Ilan Pappe offers impressive archival evidence to demonstrate that, from its very inception, a central plank in Israel’s founding ideology was the forcible removal of the indigenous population. This book is indispensable for anyone interested in the Middle East.

Buy it from here

Nakba: Palestine, 1948, and the Claims of Memory eds. Ahmad H. Sa’di & Lila Abu-Lughod. – This series of essays highlights the importance of acknowledging and commemorating the Nakba.

The Palestinian Nakba 1948: The Register of Depopulated Localities in Palestine by Salman Abu-Sitta – This book summarises with charts and timelines the events of 1948 and their horrific repercussions

The Ethnic Cleansing of Palestine/ Geoff Simons – Written part in commemoration of the Nakba in 1948, part as narrative of events of further colonisation in the 2000s