Report Launch: ‘Environment of Hate: The New Normal for Muslims in the UK’

Home
Events
Report Launch: ‘Environment of Hate: The New Normal for Muslims in the UK’ 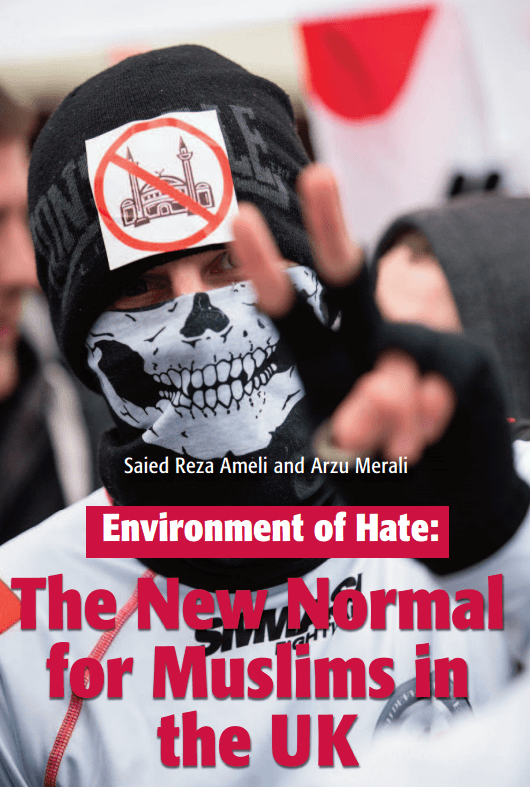 Everyday life for Muslims in Britain is characterised by rising levels of abuse, discrimination and violence, according to a new report to be released next month. The report, which is the latest in a series by IHRC seeking to evaluate Muslim experiences of hostility and discrimination, paints a disturbing picture of a community under siege from the prevailing winds of racial and religious bigotry.

The underlying theory of the IHRC Hate Crime Project is the Domination Hate Model of Intercultural Relations developed by Saied R. Ameli. It argues that hate attacks, crimes and acts of discrimination are not random acts of deranged individuals. Rather, it maintains that those people who commit such acts are provoked to do so by an environment of hatred caused by policy, media and law that targets a hated society. In the studies undertaken by IHRC so far in the UK, France, the USA and Canada, the hated society whose experiences are analysed are Muslim communities.

A panel of speakers including Arzu Merali, Peter Oborne, Nisha Kapoor, David Miller and Abed Choudhury will be available for questions.

Arzu Merali is one of the authors of the report. She is a writer and researcher born and based in London, UK. She focuses on human rights, Islamic feminism, decoloniality and the grammars of human dignity. She is one of the founders of Islamic Human Rights Commission and formerly an editor of the webjournal Palestine Internationalist.

Nisha Kapoor is Lecturer in Sociology at the University of York and a Visiting Fellow at the Center for Race, Ethnicity and Gender in the Social Sciences at Duke University (REGSS). In 2012-13 she was the Samuel DuBois Cook Postdoctoral Fellow at REGSS and have also previously held research posts at Manchester Metropolitan University and the University of Manchester. In 2014 she was awarded an ESRC Future Research Leaders Award for a project entitled ‘Race, Citizenship and the State in the War on Terror’ which explores extradition, deportation and citizenship deprivation. She co-edited The State of Race in 2013 and is currently working on a monograph titled ‘Extraordinary Extradition: Race, Rights and Resistance in Terrorising Times’.

Peter Oborne is the former chief political commentator of The Telegraph. He writes a weekly column for Middle East Eye and The Daily Mail, He has written a number of books identifying the power structures that lurk behind political discourse, including The Triumph of the Political Class and The Rise of Political Lying. He appears on BBC programmes Any Questions and Question Time and often presents Week in Westminster. He was voted Columnist of the Year at the Press Awards in 2013.

Abed Choudhury heads the IHRC advocacy project within the UK. Abed has worked on numerous UK and international projects for IHRC including conflict resolution projects in Pakistan, Malaysia and Indonesia. He has written a number of reports for IHRC and oversees IHRC’s response to prevent and counter terrorism legislation.

David Miller is Professor of Sociology in the Department ofSocial & Policy Sciences at the University of Bath. From 2013-2016 he was RCUK Global Uncertainties Leadership Fellow leading a project on Understanding and explaining terrorism expertise in practice. David is interested in understanding power: who has it, how it is exercised and how it can be democratised. He is mostly interested in studying the powerful and is interested in a wide range of methods for doing so, including via investigative research, which he pursues with a range of collaborators.

Entry is FREE and refreshments will be served. Copies of the report will be available on the day at a concessionary price. Please RSVP to ashiya@ihrc.org for admin purposes. Media enquiries to be sent to nadia@ihrc.org

The programme is being live streamed online at www.ihrc.tv and recorded for upload to the IHRC YouTube/Vimeo etc platforms. There will in addition be several members of the press in attendance. Usually we try and provide facilities for those who do not want to be filmed, however on some occasions we are unable to offer this, and this is one of those occasions. By attending you are agreeing to be filmed. If you would like to discuss this further, please email Ashiya at ashiya@ihrc.org. Thank you.

‘This will make very uncomfortable reading; not all will agree with every aspect of the analysis, but it is painfully clear that physical and verbal violence against Muslims has risen spectacularly in recent years. As the authors make plain, a failure to challenge the attitudes that produce this is to open the door also to the most overt forms of racism and anti-Semitism. What is described here is a serious reproach to our society’s most humane ideals and values.’

‘The Islamic Human Rights Commission have produced a landmark report on the interlocking environments and experiences of anti-Muslim hate in the UK. Impeccably researched and cogently argued, this report provides a robust new evidence base, of 1,782 people who were surveyed in 2014, which provides a solid foundation for the development of initiatives and interventions. Most importantly this report identifies a shocking deterioration in the quality of everyday life since the last report in 2011. Increasing hostility in political and media discourse, increasing hostility on the streets in terms of physical attacks and abuse and increasing hostility in the labour market and in educational contexts are some of the key markers of increasing anti-Muslim hate identified here. This large sample of Muslims also voice an urgent desire for change and make many useful and constructive proposals for what should be done. Opening up the political space through building alliances and creating cross-national, cross-class, trans-racial and multi-gendered coalitions for change on this vital issue is central here. The IHRC have produced a report replete with excellent scholarship, important insights and coherent and appropriate recommendations. A classic study of huge contemporary significance.’

‘The Domination Hate Model of Intercultural Relations (DHMIR) project led by Saied Reza Ameli and Arzu Merali at the IHRC is a fundamental longitudinal study on the development of islamophobic racism in the UK since 2009. The new report shows how the situation for Muslims in the UK, far from improving, has worsen. The Prevent program as the “socialisation of hate” and the recent so-called “anti-terrorist” CTS Act 2015 have produced basic violations of civil/human rights, destruction of democratic procedures, and a hate environment constitutive of the dehumanization and demonisation of Muslims. These policies have institutionalized a de facto racist police state. The British “Stasi State” is reinforced by the hate representation of Muslims in British media and political discourses reminiscent of the genocidal environment of 1930s Germany. The study shows how these institutional racist domestic policies are linked to British military imperial adventures abroad in alliance with the Western imperial/zionist colonization of Palestine and Muslim lands. The rigorous empirical evidence as well as the solid theoretical approach, makes of this study a crucial reference for policy makers, activists and social scientists interested in eradicating islamophobia as one of the dominant forms of institutional racism in the world today’ 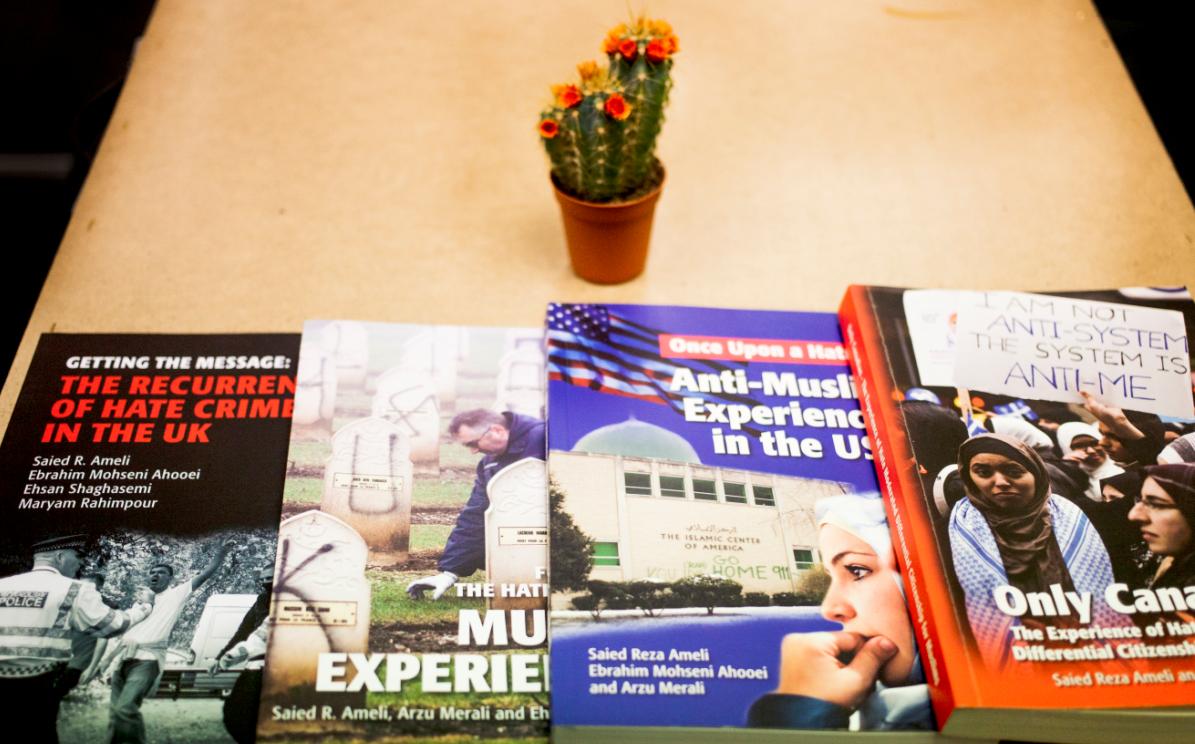