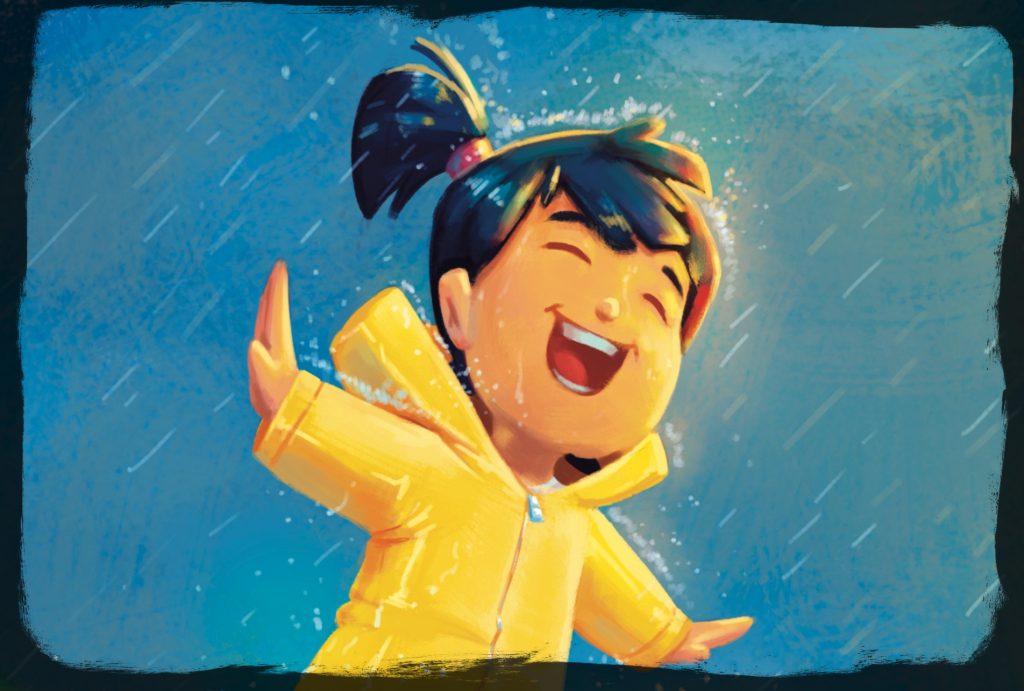 I guess she gets it from me and I, from my mother (Rahimullah).

I remember back in 1992 when I was living the life of a princess in Lahore, Pakistan, mum (Rahimullah) would run onto our marble courtyard at the slightest hint of rain and find the most hidden spot away from the sight of our neighbours. There she would stand, looking up at the outpour descending from the heavens, arms outstretched, whispering the dhikr of Allah (SWT), allowing the gentle rain drops to soak through every inch of her body in sheer pleasure and delight.

To this very day, each and every time the rain pours from the skies, wherever I maybe, I too long to run outside, look up and soak up the rain, in pleasure, in memory of my mother (Rahimullah) but even more importantly in rememberance of Allah (SWT) and the mercy that he has blessed us all with time and time again; this blessed water flowing down from a very blessed place, Sidratul Muntaha.

Upon discovering only quite recently, from where exactly the rain in our world ORIGINATES from, and how are beloved Prophet Mohammad (SAWS) was brought before it, I immediately shared this new found knowledge with my family. This discovery was not about what we are all familiar with, ‘The Water Cycle’, this was more then that, this was mind blowing. This truest of stories would make any believer seek the pleasure of the purest of water from Sidratul Muntaha.

My dearest of friends, as the rain continues to fall in London today, allow me to take you back in time, to the time of our beloved Prophet (SAWS), on the night that he was taken on  a journey by the blessed Angel Gibrail (A.S), the journey known as, ‘Al Isra wal Miraj’.

After crossing through the seven heavens with Angel Gibrail (A.S) the Prophet (SAWS) arrived at a place called Sidratul Muntaha. Here he was informed that each and everyone of his Ummah, his people, that would strive to walk down the path that he has laid out for them, their souls will reach this exact point and place.

(And now for the WOWZERS!)

Angel Gibrail (AS) told Prophet Muhammad (SAWS) that the rivers that are flowing from the top, these rivers become all the water that Allah sends down upon the Earth, Subhan’Allah, and the two rivers underneath, are the rivers that flow into paradise and becomes all the water that is found in paradise that Allah (SWT) mentions in the Quran; rivers of pure water and milk that will never go sour, wine of paradise that will not intoxicate, rivers of pure unadulterated honey, Alhamdulillah.

There is also a spring gushing forth from this point of Sidratul Muntaha. This is the spring of Salsabeel, splitting into two streams one of which is the fountain of Al Kauthar, a blessed gift to Prophet Muhammad (SAWS).

Over Al Kauthar there is a canopy, adorned with pearls, rubies and gems. The most exquisite looking green coloured birds are perched up on top of this canopy. There are cups shaped as goblets made of gold and silver that surround the fountain. The water is very pure and clean, extremely white and clear, so much so that you can see through the water to find rubies and emeralds that lay at the bottom of the fountain.

The Prophet (SAWS) picked up one of the goblets and scooped up some of the water and drank from it. He (SAWS) said, ‘It’s  taste was sweeter than honey and it had a sweeter fragrance then musk.’

After the Prophet (SAWS) had drank from Al Kauther and enjoyed it so much, Angel Gibrail (A.S) said to him, ‘This is the stream that your Lord has given to you as a gift!’

He was then told to wash himself in the stream that is the mercy of Allah after which an announcement was made that all his sins had been forgiven; meaning by bathing in this stream any past or future sins that he hypothetically could have committed have now been washed away.

The honour and greatest dignity of the Prophet (SAWS) will be that he will have the pleasure to stand at the fountain of Al Kauthar in anticipation of the arrival, one by one of his Ummah. He will scoop up water using the gold and silver goblets and serve it with his own blessed hands, to each and every single soul, Alhamdulillah.

We know from the Seerah that our Prophet (SAWS) relishes for such an opportunity. For he (SAWS) has said, ‘If you face any difficulty on the day of judgement, look for me at three places, one of them being at the fountain of Al Kauthar. You will be tired, fatigued and exhausted by the trial you have faced, don’t worry for I’ll be waiting for you at the fountain  of Al Kauthar with a drink of water that will make you forget, any or the most severest of thirsts. It is such a drink of water that you will never feel thirsty ever again.’

This gift of Al Kauthar was bestowed to our Prophet (SAWS) on the night of Al Isra wal Mirage at a very turbulent time in his life, so he could see that great things await him. All of what he was going through was for a reason and a purpose.

The enemies of our Prophet (SAWS) had said that he would have no legacy, in fact, today

the most common name in our world is Muhammad and there are over 2 billion people on the face of this earth, that when the name Muhammad is said they say, ‘Salallahu alayhi wa sallam’ (Peace and blessings be upon him). They pray, they dream, they wish to drink water from the blessed hand of the Prophet (SAWS) at the fountain of Al Kauthar.

May Allah (SWT) make us all from amongst them, Aameen.

Ever since I shared this story with my children, they are forever looking up at the heavens, during rainy days especially, in awe, in wonder, knowing now that it’s not just about, ‘The Water Cycle’, but a whole lot more. On days when it’s raining and Mini Maryam can see that I’m not feeling too great, she’ll turn to me and meaningfully will say, ‘Mama, let’s go catch some heavenly rain’.