Statement on Revival of Sectarianism 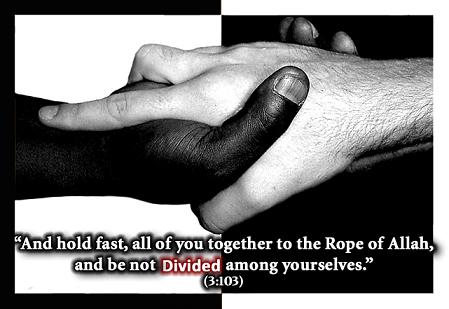 The convenors of Charter 3:103 are deeply alarmed at the upsurge in sectarian preaching amongst the Muslim community this Ramadan. Whilst hate preachers of this sort have always existed, it is clear that certain figures are working diligently to promote an imperialist agenda of divide and rule.

Yasser Habib and Abu Muntasir Al Balushi, are an example of this.  Both are London based sectarian agitators, who are indulging in provocative and anti-Islamic rhetoric, dishonouring respected and significant personalities in Islamic history and claiming that their hate speech represents Shia and Sunni narratives respectively.

The Muslim community must come together and shun such personalities.  By denigrating respected figures in this way, such agitators mislead communities and incite hatred and worse against fellow Muslims.

Massoud Shadjareh, S.M. Idris and Imam Muhammad Al-Asi, all co-convenors of the Charter said, as follows:

“It is incumbent on all of us to take a stand and reject this type of vile sectarianism.  Unity is paramount to true justice and fulfilling the Divine command.”

“Muslims have not learned from the past on how Western colonialists used their ‘divide and rule’ policy to colonise us. During the First World War they used the Arabs to fight the Turks and then colonised and balkanised Arabia to serve their interests – the end result creation of Israel and Saudi Arabia. Today they are instigating Sunni-Shia conflict for the same objective- perpetuating Western control and hegemony of our societies and nations.Muslims must wake up and unite to resist sectarianism and Western domination.”

“There is a strain of sectarianism that has always existed in Muslim communities throughout the ages. Thank the Almighty that such sectarianism was checked and confined by wise ‘ulema who are above such sectarian vile and violence. Nowadays, though, there appears to be an empowering of sectarians in different quarters of the Muslim world; they are receiving both money and weapons from their sponsors in the East and the West. Now is not the time to sing the songs of “unity” but rather to prove to ourselves that we do in practice recognize the “other” Muslim by sharing in their “religious” devotion. To be practical about all this I call upon “Sunni” Muslims to go to “Shi’i” masjids and follow their Imam in prayers — exactly as he is praying but also call upon “Shi’i” Muslims to go to “Sunni” masjids and follow their Imam in prayers — exactly as he is praying. This has to be done without any hypocrisy or gimmicks. This has to be done from the heart. This will send a strong message to all sectarians that they are wrong to say that the “other” is not a Muslim. The insult and offense of “takfir” works by sectarians when Muslims do not know themselves, keep their distance from each other, or think that they are superior and others are outside the fold of Islam.

“These times call for action not words. Enough of this talkathon nonsense that has been setting the stage for our own demise.

“I ask: who are the Muslims — Sunnis and Shi’is — who can step forward and prove that they affirm the equal Islam of the other?

For more information on the Charter and to sign up please visit this page or email info@ihrc.org

Charter 3:103 is a project of the Universal Justice Network