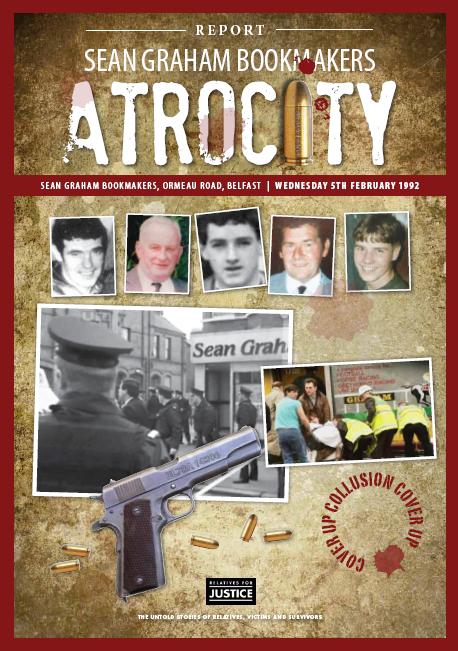 By the turn of the eighties Northern Ireland had become ghettoized between the Catholic and Protestant communities with the “trespassing” into one by a member of another often resulting in physical assault or death. The fifth of February marked the twentieth anniversary of the Sean Graham’s Bookmakers shop murder; in which 5 innocent Catholics were shot dead by UVF gunmen in a small Bookmakers on the Lower Ormeau road, South Belfast.

At 2.26pm on Wednesday 5th February 1992 two armed and masked gunmen entered the Sean Graham’s Bookmakers shop on the Lower Ormeau Road and started to open fire indiscriminately. When they left 12 of the 13 patrons were shot; four lay dead whilst others lay seriously wounded. The inside of the Bookmakers was described as “absolute carnage” by one witness, with the choking gun smoke, dead bodies and the screams of the injured assaulting the senses of whoever entered. By the early evening the dead were confirmed as Jack Duffin aged 66, Willie McManus aged 54, Christy Doherty aged 52, Peter Magee aged 18. The final fatality James Kennedy aged 15, died upon arrival at the hospital. Seven other men were shot as well, four of whom went into intensive care. The Ulster Freedom Fighters (UFF) claimed responsibility for the attack, the UFF was a cover name for the (legal) Ulster Defense Association. The atrocity struck to the very heart of the Catholic community in which it happened and left indelible scars, scars that would deepen as the years rolled by and justice eluded the perpetrators.

Relatives For Justice (RFJ), a Pressure Group involved with providing support and working with relatives of people bereaved, injured or affected by alleged state and state sponsored violence during the Troubles, has recently published a report on the atrocity which divulges some damning evidence of British state collusion with armed Ulster thugs; collusion which lead directly to the atrocity at the Sean Graham Bookmakers. The report’s findings also uncover a series of episodes which place the Police and security forces as hindering the subsequent investigation.

Brian Nelson, AKA 1033 to his special branch handlers, was a chief intelligence officer for the UDA as well as an agent for the British Northern Ireland Intelligence Corps. He oversaw the shipment of a number of firearms and munitions from Apartheid South Africa in 1989, included in this was a number of VZ 58 assault rifles. By 1992 Loyalists were responsible for the bulk of attacks in the North and the weapon of choice was the VZ 58 and it is understood that, despite two thirds of these weapons being seized, many were left unaccounted for and were subsequently dispersed among the Loyalist armed units; A VZ 58 was used in the attack on the Sean Graham Bookmakers. Regardless of the persistent attempts by the families of the victims, Relatives for Justice, lawyers and politicians the Royal Ulster Constabulary (RUC) refused to provide any details of the weapons used in the attack.

There was a clear discrepancy in the RUCs policy of disclosing information relating to murder weapons as information pertaining to Republic anattacks were released within days, further emboldening the belief in the Republican communities of Northern Ireland that the British were aiding Ulster terror cells. According to the Stevens Enquiry, another Special Branch agent called William Stobie, who was also a UDA north Belfast Quartermaster, passed four weapons onto his special branch handlers; one of which was the Browning 9mm used in the Bookmakers attacks. The Browning was supposedly “deactivated” by Special Branch before being returned to Stobie. It is now obvious that Special Branch either did not discharge the firearm properly, or lied about it, as the weapon was used for a sectarian attack on 22nd December 1991, in which Aidan Wallace, aged 22, was killed. The Browning was also one of the firearms used in the Sean Graham Bookmakers attack.

The first getaway car, which was a blue Ford Escort reg. RIJ9090, was purchased from an auction on 27th January 27. Despite the fact that the fingerprints of Suspect 2, Joe Bratty, were found on the bidding slip of the car and it was known that he was a known UDA commander for the area the attack occurred, there was a four and a half month delay in arresting him. The second getaway car, which was also a blue Ford Escort reg. YIA 6097, was stopped twice by the RUC in Belfast on the evening of the atrocity and those travelling on both occasions were known members of the South Belfast UDA, Raymond Elder was arrested for a “motoring offence” at 1am but there are no records of this.

Inconsistencies were found in the processing of forensics as well. Fibres from the first getaway car RIJ9090, were found on the denims of Raymond Elder, later dismissed by the Forensic Science Laboratory. Blood samples were found on the coats of one of the suspects, however they did not match any of the suspects or any of those shot in the bookmakers. No gun residue was found in the first getaway car, despite 46 shots being fired in total which would have created a lot of gun smoke. Key suspect Raymond Elder was charged in connection with the atrocity but these charges were dropped despite forensic evidence, witness identification and an unreliable alibi. Another key suspect in the inquiry who was referred to as “Mr. A” by the Historical Enquiries Team, a body set up to investigate murders during the troubles, was never arrested. “Mr. A” has been named in “intelligence” as one of those involved in the murder of Aidan Wallace weeks before, a shooting in which the Browning that special Branch agent Stobie handed to his handlers was used to kill Wallace; the same Browning used at the Bookmakers atrocity. It is speculated that “Mr. A”, described as “unstable and dangerous”, was a Special Branch agent.

1. How was the first getaway car able to make it through the numerous Army and RUC checkpoints on the day of the atrocity?

2. Why did the British Army’s weapons Intelligence Section attend the murder scene? Something that is completely out of protocol.

3. Why did the RUC refuse to provide the ballistics history of the weapons to the families and the media?

4. Why in May 1992 were the families not informed of the “recovery” of this weapon or those arrested?

5. Why were bereaved and injured not informed that Special Branch had this weapon in their possession and then passed it back to the UDA/UFF?

6. Why were there redactions on the Cory Report, A paper pertaining to the 9mm Browning, at the request of the British government?

In the summer of 2011 the HET concluded that “… there remains an absence of forensic, fingerprint and identification evidence. The absence of such evidence presents a major challenge in progressing the enquiry. There are no new lines of enquiry or investigative opportunities in this case that could bring about the identification or prosecution of those responsible”. RFJ believes that this does not take into account the accumulated evidence.

The report concludes on reflection of the currency of violence, which was becoming ever pertinent in light of the secret peace talks between the IRA and the British at the time of the Sean Graham Bookmakers atrocity. It is contested by RFJ that in light of IRA attacks on commercial targets in Britain the Thatcher administration unleashed armed unionists in order to strike terror into the nationalist community. Special Branch seems to have been an unaccountable entity in this whole fiasco, withholding vital information that could have saved lives all in the name of protecting agents who could in turn implicate the state in collusion with terrorism; agents who murdered innocent Catholics.

The situation in the North are different today. The scars of the conflict however, still remain. RFJ believes that in order for the book to be closed on the Troubles there needs to be complete transparent investigation into the role of the British government in arming and abetting Loyalist thugs.

The full report Sean Graham Bookmakers Atrocity can be downloaded from the Relatives for Justice website here.