Rewriting our future: the need for Muslim narratives

The theme of our place as Muslims within the wider national story is the thread that binds together three of the four articles in the latest issue of The Long View.

For at least the last two decades British society has witnessed a populist lurch to the right which has both been nourished by (and in turn fed) narratives seeking to redefine a pre-immigrant Britain that supposedly existed before the confusion and contamination caused by multi-culturalism.

In this idealised white “Golden Age” of sedate cricket matches on manicured village greens and grimy workers pouring out of smokey factories at the end of their shift, the place of minorities, be they ethnic or religious, has been called into question. Identifying a crisis in British identity they diagnose as a diffidence and timorousness in defending “traditional” British values in the face of a hostile multi-culturalism, their focus has turned on everyone who doesn’t look or talk like themselves or indeed espouse the same values. Rather than being a restatement of any kind of a native historical British identity, this identity assertion has actually taken place in opposition to more newly settled communities.

Under this resurgent right wing populism the Scottish are viewed as wantaway traitors, the EU a back-door way for Germany and France to control Britain, East European immigrants an army of cheap labour to displace British workers and Muslims a Trojan Horse looking to enforce Islamic values on the silent majority.

How have we arrived at such a critical juncture?

Professor Ian Almond locates one cause in the revision of history to recast the British Empire as a benign and benevolent force. Whether it’s the retelling of history in the classroom, the whitewashing of political atrocities and abuses, or the creation of a fictitious past through popular culture the objective is the same – to inform our choices and opinions in the troubled present by reference to a “glorious” past.

He sees how “the slow, subtle, low-key beatification of Empire has insidiously crept into the background of every debate” and that its proponents are thriving in part because they have “been able to grow in a rich topsoil of historical ignorance.”

For Dr Myriam Francois the newly-emerged national story leaves little room for Muslims except as a “problem identity” that is there to be tolerated by the “native” majority. The rampant discrimination and targeting of Muslims today parallels the recent rise of right wing narratives (and the retreat of multiculturalism) in which Britons from the periphery (former colonies) are being pushed to the margins by Britons from the old Empire’s core. But while Islamophobia may be a new specificity the challenges we face as a community as a result of racism are largely the same as other BAME communities. Addressing them, therefore, requires a more collaborative approach, more akin to that developed by Muslim groups in France where joining forces with Roma and other anti-racism groups pre-empts official attempts to play “divide and rule” politics. Dr Francois sees the arts as a way in which British Muslims can define their own place within Britain. By becoming producers as well as consumers and storytellers as well as subjects we can start to challenge the racist, politically motivated narratives that have come to dominate what it means to be British.

Arzu Merali takes up the question of how Muslims should address their erasure and misrepresentation from national narratives. She finds problematic the reflexive responses which simply restate Muslim contributions to e.g. the wars Britain has historically fought, as this risks making us complicit in the present-day glorification of the military that seeks to legitimise war against Muslims abroad. While it is important to paint ourselves into the national picture, we must reject the temptation to present ourselves as the same as those who deny our role in society and history because to do so is to acquiesce in their moral abuses, which in many cases run counter to our own divinely inspired values.

The final piece in this edition is by Yousef Alhelou and departs in part from and dovetails with in other ways the theme above. As Palestinians have grown politically and militarily weaker and increasingly more isolated as a result of their abandonment by the Muslim world, this has given rise to a new energy in cyberspace that seeks to diffuse their cause. Historically, mainstream western media has been complicit in propagating pro-Israel narratives. This imbalance, a function of power asymmetry, is being challenged by a new wave of revolutionaries who have made cyberspace their battlefield. Applications such as Facebook, Twitter and Whatsapp now enable Palestinians to bypass the censors and disseminate their own news and views to a global audience.

Having been undermined by dominant pro-Israel narratives, Palestinians have taken up the challenge of retelling their current and past stories using new media.  A lesson perhaps, for us all to take on. 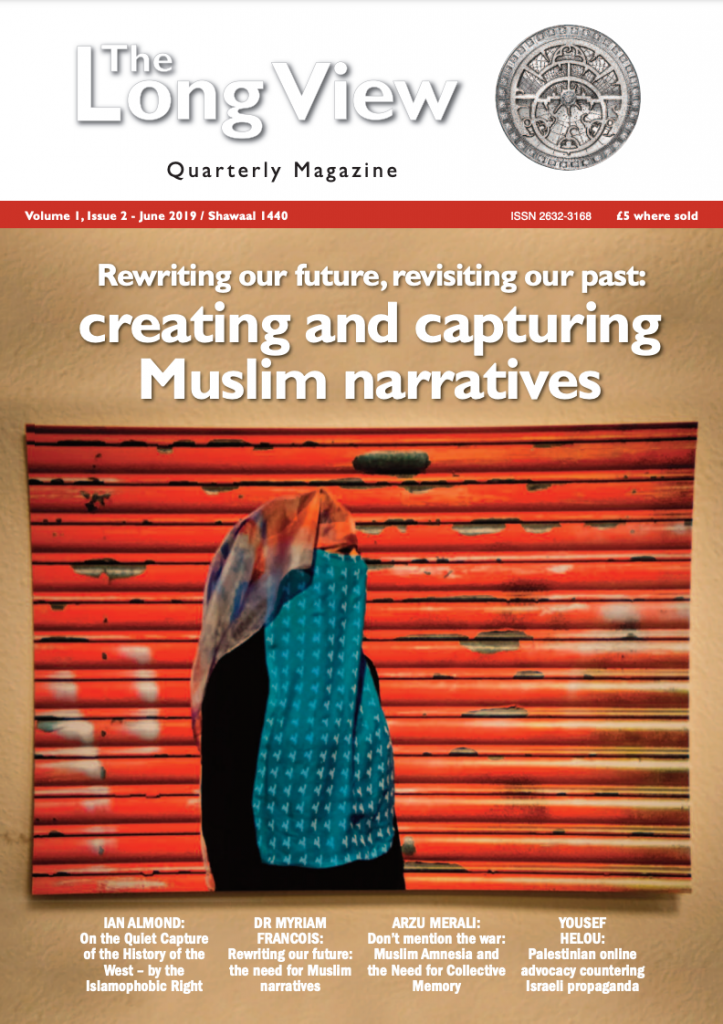 Don’t mention the war: Muslim Amnesia and the Need for Collective Memory

Rewriting our future: the need for Muslim narratives