The occasion of Muharram is a sobering period for Muslims in which the events of Karbala loom large and invite us to reflect on the tragic circumstances surrounding the murder of the Prophet’s grandson Husayn. The holy month, coming as it does at the tail of a string of three sacred months, also marks the end of the Islamic calendar year, and is itself an opportunity for personal introspection and evaluating the condition of the wider ummah. For some members of the vast family of Islam, it is a time of intense mourning while for others it is a meritorious period in which to raise one’s levels of devotion and piety. Regardless of where we sit we are all exercised in mind and spirit by the same motifs of light versus darkness, right versus wrong, authority versus power, mercy versus cruelty, thrown up by the Ashuran tragedy.

And yet there are those who, instead of seeing the martyrdom of Husayn as a unifying force, exploit the occasion to foment discord and sectarianism among the ummah. By accentuating and misrepresenting differences in scholarly historical and theological interpretation, they seek to advance their own political agendas, and in doing so strain further an already much-frayed unity. The aims of dividing and disuniting have been pursued by actors of various political/sectarian stripes through history with the result that sectarian attitudes have become deeply enmeshed in the mainstream religious fabric, to the extent that it is impossible even to speak about Islam without referencing these insidious prejudices. Imam Muhammad al–Asi, whose sermon we have transcribed to form the second article in this issue, explains how the ummah became hostage to ‘asabiyya (chauvinism or self/centredness based on familial and/or political allegiance) in the first few decades following the death of the Prophet (pbuh) and how these mental shackles continue to imprison us in our understandings of our history.

Arguably the chief protagonist in the explosion of sectarian discourse and conflict in recent times is the kingdom of Saudi Arabia. The Iranian revolution in 1979 which overthrew a monarchy to usher in an Islamic Republic, by its very occurrence, presented an existential and instant threat to a royal family whose religious claims to political legitimacy were increasingly being called into question by their policies and personal behaviour. Fearing a spillover at home and elsewhere in the region, Riyadh embarked on a delegitimisation programme at the heart of which was the sectarianisation of the revolution across the Persian Gulf and the promotion of anti-Shia propaganda around the world. The kingdom threw its petrodollars into publications, institutes and madrasahs with the aim of steering Muslims away from the “Shia” uprising and shoring up its own claims to legitimacy by stressing its Sunni credentials.

Our lead article by Hafsa Kara sees that process continuing up the present day, but with some notable developments. The intervening years have seen the Saudi mask slip as its Western client-state status has led it to gravitate ever closer to Israel to the point that it has effectively abandoned the Palestinian cause. Moreover, its repression of Islamic scholars and reformists at home, suppression of uprisings in the so-called Arab Spring aimed at instituting popular/Islamic participatory government and the devastating war it wages against neighbouring Yemen have served only to underline the autocratic, absolutist and self-serving nature of the monarchy. Controversially Kara proposes that given that the massive Hajj and Umrah revenues generated for Saudi Arabia by pilgrims and which end up paying for the destruction of our own ummah, Muslims consider boycotting the pilgrimages to avoid being indirectly complicit in Saudi Arabia’s crimes.

The Saudi rapprochement with Israel is all the more surprising in view of the fact that the Zionist state has not only strengthened its illegal hold on the Holy Land but has historically played a major role in perpetuating the global Islamophobia epidemic. Much of the media demonisation of Muslims we see today is generated by pro-Zionist organisations enjoying the implicit and explicit support of Tel Aviv. For Israel it is a way of garnering public sympathy in the face of growing international support for Palestinian self-determination and revulsion against Israeli war crimes. In our third article Robert Inlakesh explains the rise of modern-day Islamophobia as a natural outgrowth of the establishment of the Zionist state. After centuries of being treated as the “other”, the founding and evolution of Israel into a western client state that would serve as an outpost for western political interests in the Middle East led to the replacement of Jewish anti-Semitism with Arab anti-Semitism. “Ultimately, as Muslims, if we wish to solve the problem of Islamophobia, we must recognize that our struggle against it, is also the struggle of the Palestinian people and of the liberation of the Middle-East,” he argues.

The struggle for emancipation is also a theme of our fourth article by Zainab Siddiqui.  Siddiqui provides a critical lens on materialist feminist narratives, arguing that they fail to take us – as Muslims and or people of colour the world over – towards their averred aim of liberation for women.  This critique takes as a starting point the implication of liberal theories of feminism in racializing and colonial projects, past and present.  However Siddiqui argues that materialist feminism – using the example of Palestine and the Israeli settler-colonial project – does little except reinforce the same or similar racialized narratives deployed in colonial hierarchies and projects.  Referencing Franz Fanon’s works on the Algerian war of independence, Siddiqui argues that Palestinian women’s involvement in resistance is a revolutionary form of emancipatory politics – defying subjectifization by an oppressor entity.

It is the spaces of defiance, whether in Palestine, Yemen or our own self-analysis of our sectarian identities that we may begin to find a way forward. 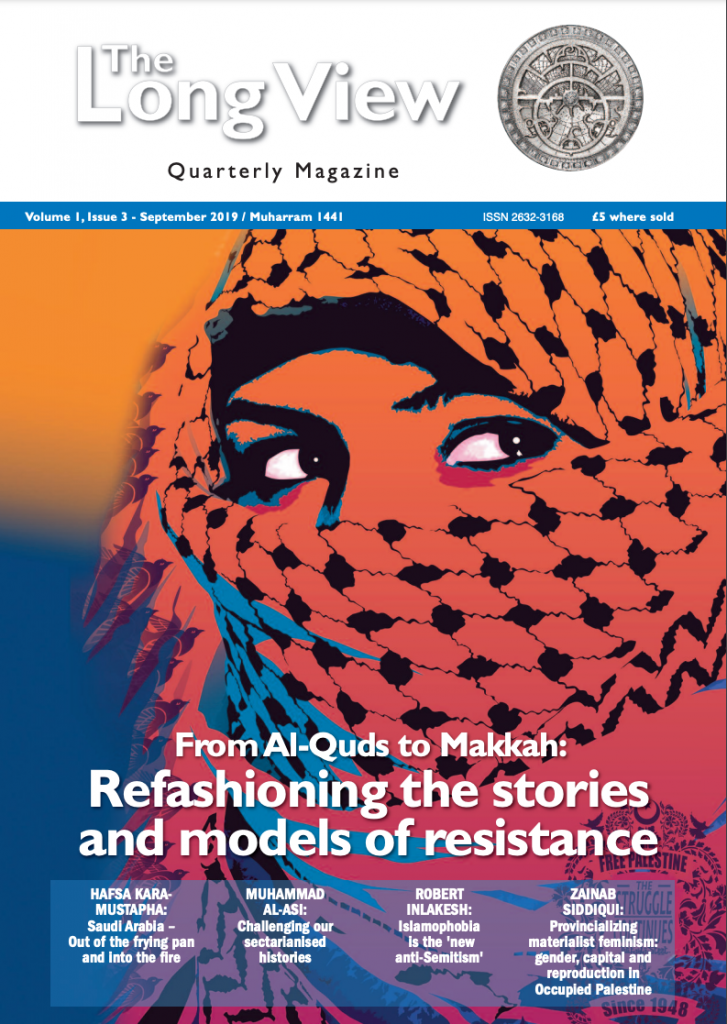 Saudi Arabia – Out of the frying pan and into the fire

Islamophobia is the ‘new anti-Semitism’