From Bosnia to the US: Fighting religious and political particularism

For many in the current generation the Chechen independence wars of the turn of the last century are at worst an untaught history lesson or at best a footnote in the long list of injustices inflicted on the Muslim world. Even for our generation, they are in danger of becoming a historical blur as more immediate crises compete for our attention. Moreover, the stability and redevelopment brought about by what is in many respects a de facto devolved pro-Moscow administration has given rise to the perception that all is now well in the once recalcitrant Caucasus region.

However, while the guns may have stopped firing the conflicts have left a legacy that is proving difficult to unwind and one which is having a deleterious effect on other parts of the Muslim world. The Salafization of the second Chechnya war not only defeated the independence hopes of the heroic Chechens but has destabilised and undermined liberation movements and Islamist politics from Indonesia to Libya, according to Zvaid Jughashvili. Saudi Arabian backed and inspired Salafi-Wahhabi fighters from the Caucasus and other areas of the former Soviet Union today form the backbone of an itinerant Muslim army that has served western imperialist interests in Libya, Egypt and Syria. The failure of repressive regimes to open spaces for Islamist politics, he argues, will mean that this trend will continue to be identified by many as the sole real “opposition”.

The discovery of 39 dead migrants in a lorry container near London last October threw into sharp relief once again the perilous journeys increasing numbers of people are making to reach a better life in Europe. Their life or death decisions are being forced by widening economic inequality between the Global North and the Global South and/or conflicts and/or climate change imposed upon their countries by the insatiable appetite of the former for power and resources.

In the fields of Mediterranean Europe, migrants from Africa and Europe join those from the poorer relations of the EU to work under conditions that approximate to modern day servitude in order to produce the fruits and vegetables we consume. Ahmed Uddin looks at the plight of this “soulless underclass” that endures everything from economic exploitation, physical abuse, torture, rape and even death just to seek the food security that evades them in their homelands. It suits the Global North to turn a blind eye to their suffering so that we can continue our over-consumptive lives and enjoy cheap produce. Exploited by farmers and criminal gangs, this army of cheap labour is then instrumentalised by the far right – and increasingly the so-called respectable right – to push their racism driven anti-immigrant agendas.

The occasion of Arbaeen is typically associated with Shia Muslims, marking as it does the end of the period of mourning for Imam Hussain, the third Imam of the Shia and the grandson of the Prophet (saw). Commemorated all over the world, it is a relatively underreported event given its scale and importance in the Shia calendar. This year some 20 million people descended on the Iraqi city of Karbala in Iraq, where Imam Hussein is buried, to mark the anniversary of the sacrifice he made along with his family and companions to implement the religious imperative of right over might, authority over power. Visiting Karbala for the first time, as a guest of the organisation that administers Imam Hussein’s shrine, Ahmed Kaballo is struck by the spirit of egalitarianism pervading the commemorations as well as the abiding legacy of Hussein’s sacrifice: a powerful moral reminder to resist evil and oppression. Inspired by the events of Karbala, thousands of Iraqis have laid down their lives to fight off the threat of Daesh and protect their communities from its perverted pseudo-Islamic ideology. Like their illustrious predecessors, their sacrifices too have not been forgotten.

In 2015 IHRC welcomed the decision by the United Nations Committee on the Elimination of Racial Discrimination urging the Netherlands to get rid of the character Black Pete from its annual Sinterklaas festivals because it contains racist elements. In recent years the Sinterklaas Festival has been a testing ground for the status of ethnic minorities and their attempts to influence what it means to be Dutch. The festival is based on a legend that every 5th December, St. Nicholas travels to the Netherlands from Spain to reward or punish children. Accompanying him are an army of helpers or “Black Petes”, clownish and acrobatic figures dressed in Moorish page suits. While the legend of Sinterklaas is rooted in Middle Age European history the character of Black Pete is a colonial construct dating from the 19th century at the height of the Dutch Empire, when the Netherlands was involved in slavery and the slave trade for more than 200 years. The racist aspects of the commemoration of Sinterklaas are offensive and an affront to the memory of those who suffered from European colonialism. In our final piece Sandew Hira charts the progress of anti-racism activists in achieving the beginning of a transformation in social attitudes towards Sinterklaas and people of colour in general.

The need for more spaces, more alliances and more sophisticated analyses of the problems that face is one of the most pressing issues facing activists whether Muslim or otherwise.  Just as marginalised people have been essentialised, so too in some cases have the responses from those organising against this oppression.  The articles herein challenge politicians, activists, academics, ulema and all civil society leaders to rethink their role in making or breaking such spaces.  There are plenty of warnings and mistakes to be found, but there is also reason to hope from our recent history.  Let us build on that. 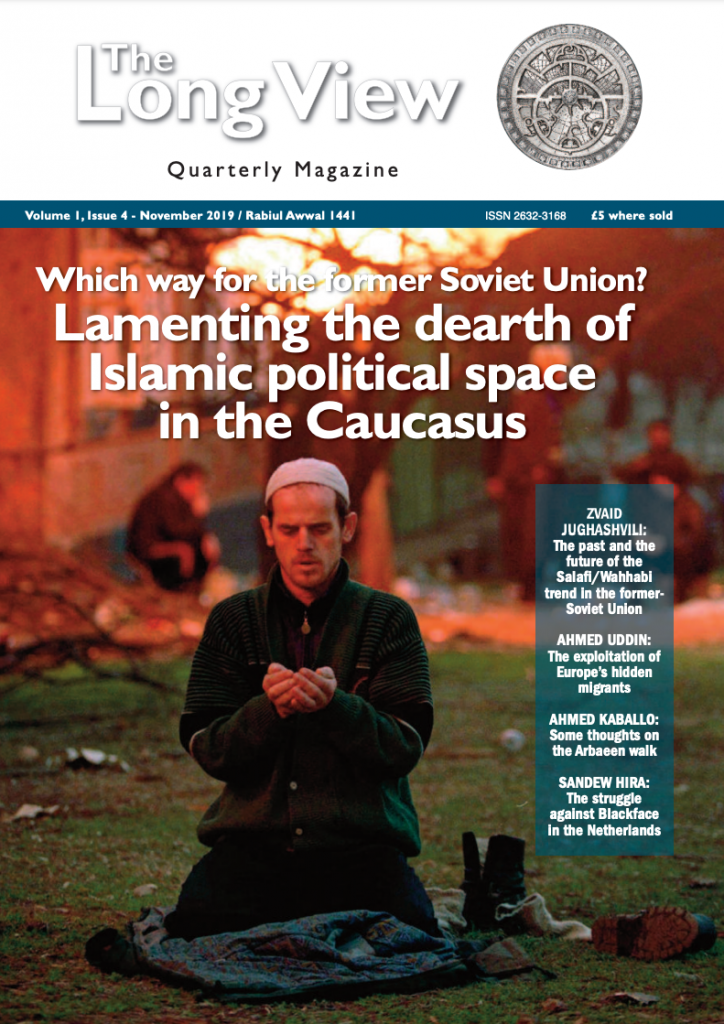 The exploitation of Europe’s hidden migrants

Some thoughts on the Arbaeen walk

The struggle against Blackface in the Netherlands