The modern ‘state’ is in crisis. Crafted around the idea of nation in the image of a ‘Spain’ born out of the conquest of Granada and the end of Muslim sovereignty in 1492 CE, its contradictions include what Hannah Arendt identified as its role between being the instrument of law or the instrument of nation. The former, in this age of deep crisis, might still be argued to be aspirational. Could there be a form and function of national organisation, within these current borders and boundaries, that offers dignity and justice for those within its realms? The latter contention, perhaps encapsulates the current moment in all its horror – the state as a form of organisation that seeks only to validate one uniform exceptionalised identity.

This issue looks at some of the current examples of this process at work within Westernised settings (France, the UK, US and Bosnia Herzegovina) within their borders, and exported via foreign policy, in the case of Afghanistan. The role of supremacism in the formation of the ‘nation state’ has been discussed in detail elsewhere, including in previous issues. What is presented in this issue are the details of how that supremacism manifests.

In our lead essay, Yasser Louati forensically details the longer history to the current vogue of the French intellectual and political classes’ unanimity over the so-called anti-separatism laws. Emmanuel Macron’s claim that the laws sought to tackle ‘Islamist separatism’, are in Louati’s opinion simply the culmination of a long history of state sanctioned exclusion of the Muslim as a political subject in France. Law after law and policy have preceded the anti-separatism law that in the last year have allowed for the unprecedented closure of NGOs and mosques by the French authorities. This mass crackdown, despite some international censure, has largely gone unchallenged internally and external to France’s borders. Fighting back, argues Louati, requires a new political sophistication from civil society, whether Muslim, French, both or any or no combination of political, ethnic and religious identities.

The role of ‘race’ as the organising basis of the modern state, as argued by inter alia Ramón Grosfoguel and Alana Lentin, is evidenced not just in the overt chauvinism of the French state but also in settings which have what appear to be robust equalities legislation and cultures. Afroze Zaidi’s essay looks at this very quandary. The UK and US both claim legal cultures that seek to deliver equality for various marginalised groups. However, both deliver a reality that not only fails those expectations, but which is being used to facilitate both cultural and legal exceptionalism in the service of white supremacism. Zaidi’s case studies – of the rise of claims of anti-white racism in the UK, and the backlash after Colin Kaepernick’s anti-racism protest in the US – highlight that the failure to deliver equality cannot be simply ‘fixed’ by changes in law but by the very culture and ideas that underpin the state.

Faisal Bodi’s review of the recent, tragic history of Afghanistan shows how the supremacism inherent in Western nation states, plays out in their foreign policies, even after the so-called era of colonial politics is supposed to have ended. Despite the stunning ‘victory’ of the Taliban in the summer of 2020, Bodi looks to the long running history of intervention by the US and its allies in the region, and pessimistically surmises that there is more yet to come. The US and before it the UK, both operated a policy mired in arrogance and not, despite their various protestations, benevolence. Their support for various players in the country, including the previous incarnation of the Taliban, bodes ill, if there is no shift in the political thinking of those who seek to challenge the injustices perpetrated by the US and its allies.

In our final essay, Demir Mahmutćehajić looks at the current fragile state of Bosnia Herzegovina. A febrile atmosphere has continued to pervade the country, fuelled by a culture of genocide denial from sections of Bosnian Serb society and politics. Since Mahmutćehajić’s last essay on these pages, there have been several attempts by Bosnian Serb politicians, led by Milorad Dodik, to take control of powers from the federal government to the Bosnian Serb entity Republika Srpska, through various ‘legal’ mechanisms. This process, Mahmutćehajić argues, is at worst set to break up Bosnia Herzegovina along ethnic lines, and at ‘best’ set to leave the country in a state of perpetual conflict. Once more the resurgence of ‘nation’ defined by ethnic/religious identity has reared its ugly head in the region.

The problematising of the nation state as the system through which governance and representation is effected is a necessary project. If, as this issue’s essays suggest, we cannot rely on reform, we must ask ourselves what forms of governance are needed to effect a more equal and just world. Join us in exploring both the disfunction and potentials of current political organisation. 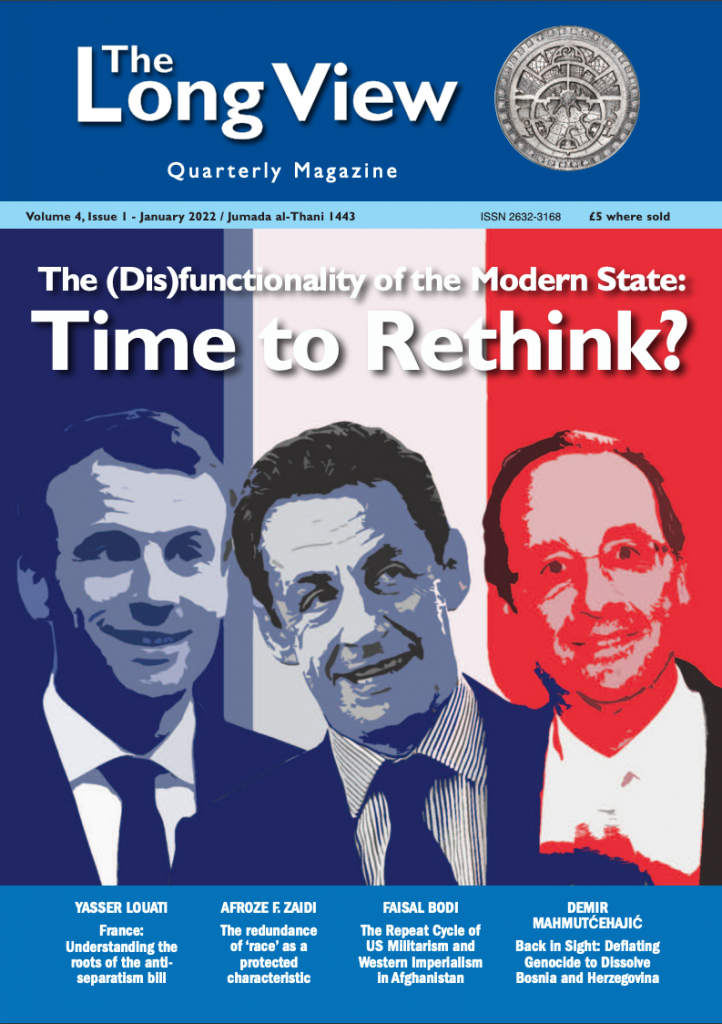 France: Understanding the Roots of the Anti-separatism Bill

The Redundance of ‘Race’ as a Protected Characteristic

The Repeat Cycle of US Militarism and Western Imperialism in Afghanistan

Back in sight: Deflating Genocide to Dissolve Bosnia and Herzegovina