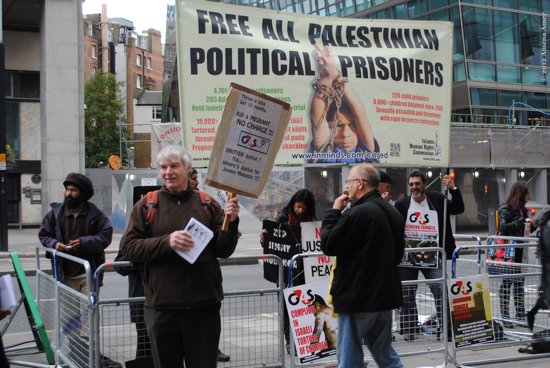 IHRC are urging campaigners and activists to demand the BBC follow its remit to “inform”, “educate” and provide “trusted World and UK news…” by covering the plight of Palestinian hunger strikers such as Samer Al-Issawi in G4S-provisioned Israeli prisons and interrogation centres.

Attend the vigil outside G4S:

Attend the vigil outside BBC:

Organised by: IHRC and Inminds

Samer Al-Issawi has spent more than 10 years in Israeli Prisons.  After his brief release in October 2011, as part of the exchange for the release of Israeli soldier Gilad Shalit, Issawi was rearrested for visiting the West Bank. He has been on Hunger Strike now for over 200 days as part of a united effort to bring to international attention the Israeli Prison Systems in which torture and administrative detention are commonplace; in clear violation of international human rights law.

British-Danish security firm G4S has made provisions  to the Israeli security apparatus including a perimeter defence system and command control centre for Ofer prison in occupied Palestine, and security systems for the al-Jalame interrogation centre in Israel.

In spite of the increasing international awareness and campaigns on the issue of the Palestinian hunger strikers, BBC only reported on their situation following the death of Arafat Jaradat. Is the BBC waiting for one of these hunger strikers to die before they cover their plight?