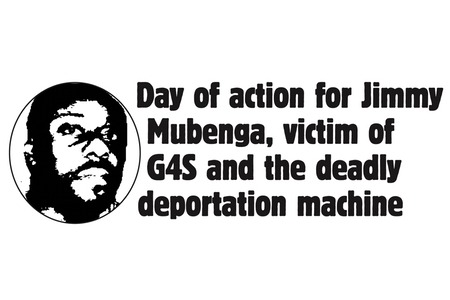 Next week, anti-G4S campaigners will mark the two years since the death of Jimmy Mubenga during a forced deportation on 12 October 2010.

Jimmy Mubenga, an Angolan father of five, died on a British Airways plane at Heathrow after he was restrained by three guards from G4S, which was contracted to carry out ‘escorting’ (deportations) for the UK Border Agency.[1] Jimmy was heard to say ‘I can’t breathe, I can’t breathe’ and ‘they’re going to kill me’ before he collapsed.[2]

Jimmy’s family had to wait until July this year for a decision from the Crown Prosecution Service (CPS) on whether the G4S officers or G4S itself would face any charges in connection with his death. They were told that there was insufficient evidence to prosecute, a claim frequently made in relation to deaths in custody. The decision described as perverse by Lord Ramsbotham[3] has left Jimmy’s family distraught.[4] They now await an inquest into his death which will not be held until next year.

G4S is infamous for the failings to provide security at the recent Olympics. However, the company has a track-record of failings over the care of people in the private prisons and detention centres they run.

G4S’ activities are not confined to security and running prisons and detention centres, the company has recently started providing housing to asylum seekers in the Midlands and the East of England and the North East, Yorkshire and the Humber. These contracts have already been the subject of criticism.[8] The company has also been awarded contracts to run the coalition government’s Work Programme and contracts to ‘help England’s most troubled families’. And overseas, the company also operates security services at checkpoints and settlements in the Occupied Palestinian Territories, and for Israeli prisons.

A ‘Stop G4S Convergence’ taking place this weekend in Sheffield will bring together those campaigning against the activities of G4S, in the UK and overseas.

The Stop G4S Coalition which has called the action on Friday 12 Octoberoutside the offices of the CPS, says that ‘G4S should not be allowed to profit from torture and death and get away with it’.