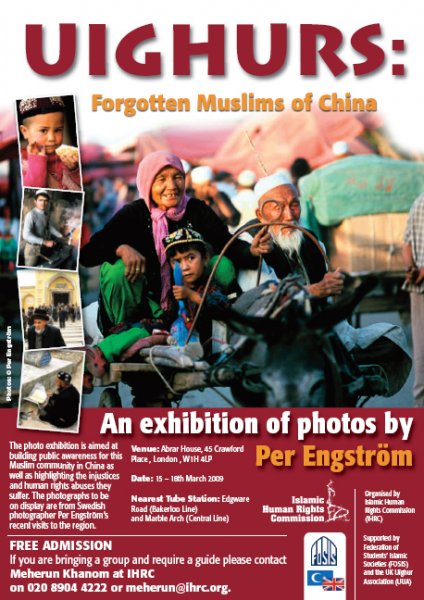 ‘Uighurs: China ‘s forgotten Muslims’ – An exhibition of photos by Per Engström

‘Uighurs: China’s Forgotten Muslims’ was an exhibition organised by IHRC and sponsored by the Federation of Student Islamic Societies (FOSIS) and the UK Uighur Association (UUA). The exhibition was proudly launched and presented by Swedish photographer, Per Engström detailing the life, culture and experiences of the Uighurs; an ethnic Turkic Muslim people/community who are an indigenous community of the Xinjiang in North West China (formerly known as East Turkestan).

Watch some of the videos of the event below, and real a full report underneath with a gallery of photos at the end.

The exhibition was aimed at raising public awareness of the racial and religious persecution faced by the Uighur community.  The photographs being exhibited were from Engström’s visit to the troubled region. The exhibition was launched on 14thMarch and held till 18thMarch 2009 for public viewing at Abrarhouse, Edgware Road.

The Uighur community of Xinjiang in North West China, has faced ongoing discrimination and frequent bouts of violence at the hands of Chinese authorities.  Despite this fact and the harsh spotlight on China’s human rights record, little if anything is known about the Uighurs. With attendance of press and media figures there was a strong enthusiasm and curiosity generated amongst the Muslim and non-Muslim attendees, who were all united to address any misconceptions about the Uighurs, whist upholding the value and importance of human rights. Uighurs have been perceived and categorised as ‘separatists’ and ‘terrorists’ by the Chinese government, which has led to a widespread suppression of the Uighur culture, traditions and religion. The Uighurs are among the most oppressed peoples in the world, where the Chinese authorities have been annihilating their language, religion, traditions and cultures and their very identity, swamping their country with mass Han immigration. Young Uighur women have been subjected to enforced exile and labour and many have had their health riddled with poisoning from nuclear test sites being set up in close proximity to where they live, all of which contributes to the oppression and denial of civil and political rights that are common to all who live in China. Whilst the world’s and media’s attention has been highlighted on the oppression of the Tibetans, very little attention has been shed on the Uighurs, where one conclusion can be made. Since the September 11 attacks in the USA,  China has made use of the event to promote its persecution of Uighurs as its own ‘war on terror’.
Whilst showing the hardships and discrimination faced by the Uighurs, this exhibition also celebrated their culture and tradition and helped shed light on a people hidden from the world for so long. Uighurs have been brutally denied of their human rights since being occupied by China since 1949.

All of the guest speakers talked about the Uighur issue. Per Engström talked about his recent visit to the troubled region and the story behind each individual photo. Angelos Rallis talked about the Uighur situation today based on his travels there, whilst Enver Tohti Bugda and Kaiser OzHun talked about their life growing up in a climate of fear and control and provided a rich, detailed insight into life as a Uighur.  Bugda, formerly a cancer specialist in the region, came to the UK after he exposed the horrific impact on the health of the community caused by the Chinese governments nuclear tests in the region (to read more about his story click here).  IHRC’s Chair Massoud Shadjareh gave a short speech on the need to recognize the plight and persecution of the Uighurs and campaign to help them.

This was an important event highlighting and marking the plight and persecution of the Uighur Muslims in China whose circumstances and lives have largely gone unnoticed whilst denouncing such ill-treatment. This Muslim community has borne the brunt of many exclusionary and systematic practices conducted by the Chinese majority and officials and treated in a manner that falls below human rights standards.

The aim of this event was to encourage more people to become involved in campaigning for justice for the Uighur Muslims by persuading the Chinese government to improve their treatment of the Uighurs and to recognize them as equal citizens of China. By holding this exhibition in honour of the Uighurs they would be introduced to those individuals who are unaware that this community exists.

With the evening drawing to an end, traditional Uighur food was served which provided an air of authenticity to the evening of the launch of the exhibition.

Guests spent their time browsing the photos and asking questions about this ‘forgotten nation’. It was an exceptional evening and amongst the attendees were people of all domains and walks of life and drawn together and united by the sole cause to highlight the plight of the Uighurs, in order to show just rights and to counter discrimination and persecution.

The exhibition was held for public viewing from the 15-  18 March at Abrar House. Members of the public came to view the exhibition, which included schools arranging trips to view the exhibition. A powerpoint presentation and video were played in the background about the nuclear testing sites in East Turkestan which has affected the Uighur nationals.

To see a gallery of pictures from the evening click here.

Lord Stuart Weir, who attended the reviewed it thus:

The Uighurs are among the most oppressed peoples in the world. The Chinese authorities have been destroying their language, religion, ways of life and very identity, swamping their country with mass Han immigration, subjecting their young women to enforced exile and labour and poisoning their health with nuclear tests (and, as I understand it, even hiring out test sites to Pakistan and possibly France).
To read the rest of this review please click here.

IHRC would like to thank our supporting organizations, UUA and FOSIS for this event and to all the staff and volunteers, the guest speakers and the media who were involved in making it into a successful event and all the members of the public who came to view the exhibition.