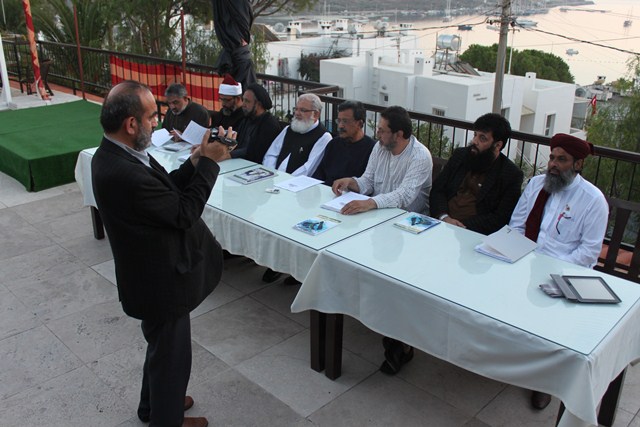 The signed copy can be downloaded from the end of the page.  Full text below.

Whilst recognising that the Ummah and the Shariah make Justice, Peace, Unity and Sabr (to patiently strive) obligatory in order to achieve the aspirations of the Muslims,

And endorsing the definition of Muslim according to the Amman Declaration (ii) ,

And understanding that the conflicts in Palestine and Kashmir are fundamental issues facing this Ummah and on which there is unanimity,

And strongly condemning the instigation of sectarian division and internecine conflict within the Ummah to divert attention away from Palestine and Kashmir,

We, the undersigned, agree to the points in this declaration to counter and remove sectarian divisions and violence and further escalation of internecine conflict within Pakistani society:

1. To release a joint public statement that states, categorically, that killing fellow human beings based on colour, creed, ethnicity and religion is Haraam and against the Shariah.

2. To release a joint public statement that states that abusing the Prophet’s (Sallallahu ‘alaihi wa alihi wa sallam) family (including his wives), companions and relatives as well as the religious opinions and beliefs of Muslim groups is Haraam and is against the Shariah.

4. Whilst recognising that the foregoing passages are central to our aim, and to be upheld at all times, we agree to jointly issue the above statements in Muharram 1435 and will further develop these points jointly and individually and promote and encourage others to agree and live by these principles.

5. To jointly and actively establish and maintain relationships between our different schools and organisations as well as attending each other’s events and programmes as a way to establish, maintain and develop brotherhood.

6. To issue joint statements promoting harmony between all groups in Pakistan and promoting these statements through print, electronic and social media networks.

7. We recommend that the Madrasas within our spheres of influence should develop their syllabi and curricula to tackle the social, political and economic needs of Pakistan whilst also addressing the need for respect, harmony and peace between all members of Pakistani society.

8. We will lobby for the development and implementation of legislation to combat hate speech and push for more effective prosecution of violations of such legislation; and we denounce sectarian violence and killings carried out by vigilantes.

10. UJN(iv)  agrees to support the promotion and dissemination of messages of unity and harmony by the signatories and their respective organisations through media networks and social media and help disseminate the messages worldwide.

11. UJN agrees to get a signed international statement of support, for points 1-3 of this declaration, by Ulema from all over the world.

And hold firmly to the rope of Allah all together and do not become divided. And remember the favor of Allah upon you – when you were enemies and He brought your hearts together and you became, by His favor, brothers. And you were on the edge of a pit of the Fire, and He saved you from it. Thus does Allah make clear to you His verses that you may be guided.

(iii)  Charter 3:103 is an opportunity for the silent majority to reaffirm their commitment to unity according to the verse: “And hold firmly to the rope of Allah all together and do not become divided. And remember the favor of Allah upon you – when you were enemies and He brought your hearts together and you became, by His favour, brothers. And you were on the edge of a pit of the Fire, and He saved you from it. Thus does Allah make clear to you His verses that you may be guided.” Quran, Chapter 3, Verse 103 http://ujnweb.com/wp-content/uploads/2012/11/A-Call-for-Muslim-Unity.pdf

(iv)  Universal Justice Network (UJN) is a global initiative that seeks to establish an empowered Ummah that will work for a world where:

There will be a free flow of people, ideas, culture and commerce.

The wealth of the world is equitably distributed and poverty, dispossession, deprivation and discrimination are eliminated.

There is a stewardship of the environment. The link between God and his creatures are strengthened and spiritual quest valued. Waste and over-consumption are discouraged.

Pursuit of knowledge and universal values are encouraged and treasured.

(v)  Originals of this Declaration will be filed at the UJN Secretariats in London, UK (Islamic Human Rights Commission) and Penang, Malaysia (Citizens International) and copies will be issued to all the signatories.