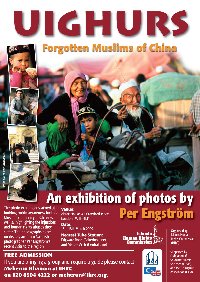 Professor Stuart Weir:
\”You have just three days to see iconic photographs of the Uighur people who are being systematically destroyed by the Chinese authorities. The photographs are in an exhibition at Abrar House, 45 Crawford Place, London W1, which ends on 18 March and seeks to draw attention to the brutal denial of human rights to the ten million or so Uighur people who live in their vast homeland and former independent republic and ages-old kingdom of East Turkistan, which has been occupied by China since 1949.

\”The Uighurs are among the most oppressed peoples in the world. The Chinese authorities have been destroying their language, religion, ways of life and very identity, swamping their country with mass Han immigration, subjecting their young women to enforced exile and labour and poisoning their health with nuclear tests (and, as I understand it, even hiring out test sites to Pakistan and possibly France). All this, let it be said, in addition to the oppression and denial of civil and political rights that are common to all who live in China.

\”The organisers of the exhibition describe the Uighurs as the \”forgotten nation\”. And it is remarkable how we in the west and the rest of the world ignore their living tragedy while focusing intensely on China\’s parallel oppression of their neighbour, Tibet. Per Engstrom, the Swedish photo-journalist who took the photographs on show, has no doubt why. It is, he says, because the Uighurs are Muslims. An over-simplification, of course, but one with a troubling element of truth.

\”For the diverse Muslim communities who live in this country are also a kind of \”forgotten nation\”, their sense of belonging and shared citizenship obscured and denied by Islamophobia and bias, even among those who describe themselves as liberals. It is not just the Sun! I was shocked at the recent Convention on Modern Liberty to hear a prominent liberal commentator on the final panel describe Islam as an obstacle that we concerned liberals gathered together had to overcome.

\”Yet the organisers of the exhibition – the staff and voluntary workers of the Islamic Human Rights Commission – who put the lie to the common idea that Islam and human rights are irreconcilable. In a series of interviews with diverse groups of young Muslims from Bradford, north and south London I was struck by their conviction that Islam was a religion of concern for others. Yet active Muslims like Massoud Shadjareh, chair of the Commission, and ordinary Muslims very rarely get a hearing on our media. Just in the past week I have read a long interview with a Muslim extremist in the Standard and listened to another on the Today programme defending the handful of \”nutters\” (Baroness Warsi\’s phrase) who mounted the vociferous protest in Luton against the Royal Anglian troops on their return from Iraq. It is the \”nutters\” to whom our media pay attention rather than more representative Muslim voices (I almost wrote \”moderate\” voices, unnecessarily, but such is the prevalent bias in our society). In doing so they demonise whole communities while boring us all.\”

The photo exhibition is aimed at building public awareness for this Muslim community in China as well as highlighting the injustices and human rights abuses they suffer. The photographs to be on display are from Swedish photographer Per Engstrom’s recent visits to the region.

Admission is free. Groups welcome (please contact the Meherun@ihrc.org if you want a guide).

For more information, please contact the office on the numbers or email below: