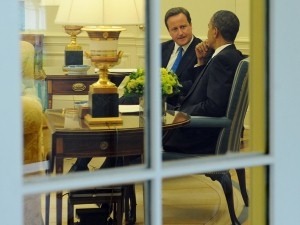 Delivering an urgent statement to the Commons this afternoon, Foreign Office minister Alistair Burt said the Egyptian government needed to find a “pathway to peaceful change”.

The statement came hours after a telephone conversation between David Cameron and Barack Obama in which both leaders finally bowed to international opinion and called for an “orderly transition” in the country.

Washington and London have been slow to call for President Hosni Mubarak to stand down. Many western leaders are worried that the failure of the Egyptian regime could see the Muslim Brotherhood, the most well-organised opposition party, take control.

“We’re working with our international partners to make sure these messages are given consistently,” Mr Burt said.

“It is not for us to decide who governs Egypt. However, we believe the pathway to peace in Egypt is through peaceful change.”

The rhetoric from Labour was somewhat tougher than that from the government, although neither side was willing to actually demand the resignation of President Mubarak.

Shadow foreign minister Stephen Twigg said: “The House is united today in expressing our concern at the loss of life since last Thursday. Thousands of courageous Egyptian citizens have taken to the streets.”

He asked Mr Burt whether the minister agreed that Britain “has a responsibility to those people to support their demands for freedom and to encourage their transition to a more open, democratic and pluralist Egypt”.

During a phone call last night Mr Cameron and President Obama shared their “deep concern” at the unfolding events in Egypt, where demonstrators were once again refusing to abide by a curfew which has now been extended into the afternoons.

“The prime minister and the president agreed that the Egyptian government must respond peacefully to the ongoing protests,” a Downing Street spokesperson said.

“They condemned the violence of recent days. It was essential that the Egyptian people were able to exercise the rights of freedom of assembly and of expression. The prime minister made clear that restrictions on the media and internet were unacceptable and should be lifted immediately.

“The prime minister and President Obama were united in their view that Egypt now needed a comprehensive process of political reform, with an orderly, Egyptian-led transition leading to a government that responded to the grievances of the Egyptian people and to their aspirations for a democratic future.”

While the statement falls short of actually calling on President Mubarak to stand down, it is by far the toughest rhetoric to emerge from Washington or London, most of which was previously restricted to criticising violence against demonstrators.

Asked by the BBC if he thought reform was possible with President Mubarak in place, Mr Cameron replied: “I’ve said what I’ve said and I’m not going to pushed further.”

Islamic groups have been incensed by the tepid rhetoric of western leaders since the Egyptian protests began.

But western leaders are distinctly nervous about events in the Middle East. Egypt plays an important role in the Middle East peace process and it shares the Rafah border with the occupied Palestinian territories.

“Hosni Mubarak is not Saddam Hussein. There has been a certain amount of economic change,” he continued.

“There should be change but do it with care.

“I’ve said for years this is a region in transition, the question is where is it transiting to? It can be taken backwards into a very reactionary form of religious autocracy.”

The Muslim Brotherhood is significantly different to more extreme religious parties in the Middle East and its leadership has gone out of its way to demonstrate to the west that the party is legitimate.

But the organisation retains tough views on Israel, suggesting the country would develop even more of a siege mentality should the Brotherhood emerge victorious in Egypt.

Foreign Office advice was upgraded on Sunday, with a message for British nationals to leave the country if it was safe to do so.

Extra consular staff have been sent to Cairo airport. Around 15 staff members are now thought to be in the airport, but reports from Britons in the country suggest widespread anger at the lack of assistance from the Foreign Office.

So far, at least 100 people have been killed in the fighting, which has lasted six days.

Yesterday, planes flew over the capital in a show of force designed to demonstrate to protestors that the government had not fallen yet, despite scenes of army personnel mingling with demonstrators.

But the move did little to dampen the moral of demonstrators, who gathered again in Tahrir Square in Cairo today in their tens of thousands.

A general strike has been called which is being respected in several locations in the country. Activists are calling for a million people to hit the streets tomorrow.