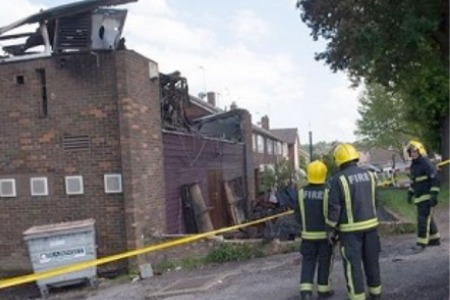 CAIRO – The burning of an Islamic center in London is sending shockwaves into the Muslim community in Britain, amid rising fears of a new wave of anti-Muslim attacks in the wake of a machete killing of an army soldier.

“Muslims have been physically attacked, mosques burnt down, cemeteries vandalized and social media is full of anti-Muslim hatred and violent threats.

“More needs to be done to protect the Muslim community.”

A graffiti reading “EDL” was painted on the wall of the burned center, in reference to the far-right English Defence League.

Police confirmed that the letters EDL were spray-painted on the center’s walls and are investigating any potential connection between the graffiti and the fire.

The arson comes days after the killing of a British soldier in a machete attack by two converts of immigrant origin in Woolwich, near London.

The May 22 killing has sparked a wave of attacks against Muslims and their worship places in Britain.

Some 212 “anti-Muslim incidents” have been reported after the Woolwich attack last month, according to Tell Mama project, which monitors anti-Muslim attacks in Britain.

The figure included 11 attacks on mosques, in a series manifestation of anti-Muslim sentiments.

Muslim leaders have called for a government action against anti-Muslim sentiments in Britain.

“This is the latest in a series of attacks on Muslim institutions since the horrific murder of Drummer Lee Rigby,” Farooq Murad, Secretary General of the Muslim Council of Britain (MCB), said in a statement obtained by OnIslam.net.

“The British Muslim community came out in droves to condemn this murder, and it is despicable that Muslims should be held to account and suffer in this way.

“It is time for serious action against such crimes.”

The EDL, which is notorious for anti-Muslim rhetoric, has blamed Muslims and their religion for the army soldier’s attack in Woolwich.

The far-right group has staged several protests against Muslims and their mosques in the wake of the attack.

The MCB leader said that Muslims have heard a lot of condemnations of the EDL actions, but without action.

“Now we need a proper response from our police authorities, starting with a national police response to this issue,” he said.

“Admirably, local police forces and borough commanders have been liaising with communities. Now we need to hear from the Metropolitan Police Commissioner and the leaders of Association of Chief Police Officers (ACPO) as to what they will be doing to protect this rise in attacks.”

Britain’s 2.7 million Muslims have taken full brunt of anti-terror laws since the 7/7 attacks.

A Financial Times opinion poll showed that Britain is the most suspicious nation about Muslims.
A poll of the Evening Standard found that a sizable section of London residents harbor negative opinions about Muslims.

This article was first published in the OnIslam website on 6 June 2013. Read the original article here