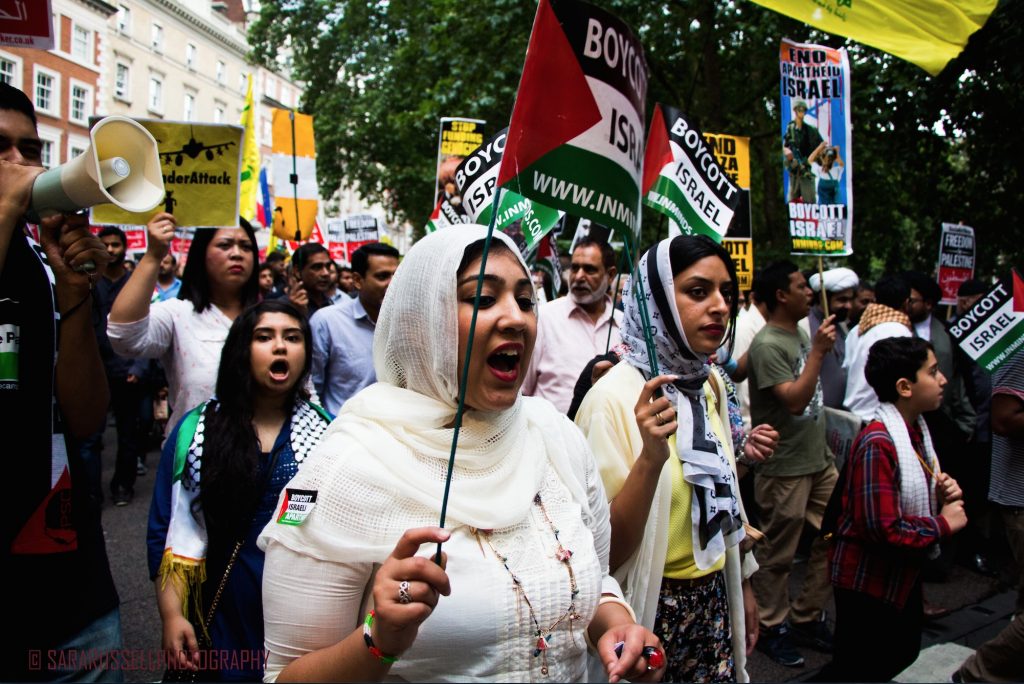 Thousands of protestors have marched through the streets of central London to the US embassy to protest againt the ongoing Israeli onslaught on the Gaza Strip.

According to organisers as many as 9000 took part in the annual Al-Quds demonstration, inaugurated in 1979 by late Ayatollah Khomeini, who declared the last Friday in the Islamic holy month of Ramadan be set aside by Muslims as a day for uniting against Israel and showing support for the dispossessed and oppressed Palestinians.

This year’s protests took place against the backdrop of the rising toll of Palestinian casualties Gaza Strip. Over 800 Palestinians, the vast majority of them innocent civilians, have now been killed in the onslaught which has involved the shelling of densely populated civilian areas. Entire families have been wiped out in the often indiscriminate bombardments by warplanes, ground artillery, and naval vessels.

Atrocities and war crimes continue to be perpetarted daily by Israeli forces. Since its offensive started Israel has bombed at least four hospitals. Yesterday, an attack on a UN refugee shelter in Beit Hanoun where people were taking refuge from the onslaught killed 16 people and wounded 150 more. Israeli troops have also deliberately targeted schools, mosques and innocent children playing on the beach.

The US embassy was chosen as a rallying point because of Washington’s status as Israel’s staunchest supporter. The US continues to underwrite the Zionist regime financially, militarily and politially and block all attempts at finding a just solution to the Palestinian issue.

At the steps of the heavily guarded US embassy demonstrators heard speakers including Massoud Shadjareh of the Islamic Human Rights Commission, Roland Rance from Jews for Boycotting Israeli Goods, John Rees from Stop the War and Foad Shatt from the Union of Palestinian Students UK denounce the Israeli offensive and call on people worldwide to intensify efforts aimed at pressurising Tel Aviv into finding a just solution to the Palestinian issue.

The London rally was among many taking place today across the world including Berlin, Islamabad, Tehran, Beirut, Rome, Madrid and Toronto. The largest rallies were seen in Iran where millions took to the streets after Friday prayers.