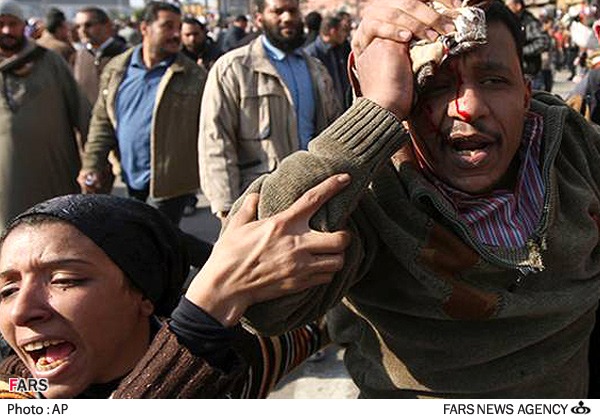 The Islamic Human Rights Commission (IHRC) is outraged over the continued killing of Egyptian protestors by undercover police and thugs. IHRC condemns the use of excessive force against the protesters by the regime.

Human rights violations and crimes against humanity are taking place at the hands of the regime amid the silence of the American and European governments.

Campaigners are requested to write to William Hague, UK Foreign Secretary, expressing their concern over the current incidents in Egypt and to address the Egyptian president to stop the bloodshed of the people.

A revolution in Egypt started on January 25, 2011 calling for the dismissal of the government and the removal of President Hosni Mubarak who has been in power for the past 30 years.

During Mubarak’s era ruthless suppression of the people, through poverty, unemployment, injustice and corruption, torture and imprisonment of political opposition figures prevailed.

The Egyptian people started this revolution seeking the implementation of a real democracy that embodies accountability, political participation and pluralism, and the transparency of the system.

Due to the continued protests, Mubarak was forced to dismiss the government and appoint a new one. In his speech yesterday, Mubarak announced that he will not run for another term but insisted that he will remain in power until the end of his current term. He warned anti-government protesters that clashes will erupt if the protests continue.  This provocative speech flared outrage amongst the people. They chanted “Leave now” and “the people want the prosecution of the president” .

Since the beginning of this revolution, none of the demands of the people have been met including constitutional amendments. According to the reports, more than 300 people were killed and thousands have been injured over the last week.

The undercover police and thugs, working for the Mubarak regime, came on camels and horses using knives and swords as weapons against people. There have been a large number of killings and injuries amongst the unarmed protestors including women and children.

The Egyptian army is currently in the streets and has not intervened during this crucial time.  It did not stop the clashes or prevent more bloodshed and was in fact asking to do as Mubarak had asked which was to get off the streets.

Kifaya Movement and 6 April Youth Movements reported that the attacks against the protestors were aiming to show the media that the Egyptians are divided, but the reality is that the majority of people want Mubarak to step down.

Hassan Nafa, Professor at the Faculty of Political Science, Cairo University, said: “I call on the army to arrest President Mubarak and bring him to justice. This massacre needs to be ended.”

IHRC urges the international community and European governments to impose pressures on Mubarak and urge him to step down in order to maintain peace in the country and end the blood shed.

Write to William Hague and the foreign minister in your country, expressing outrage over the killing of the protestors and asking them to condemn and take every possible action to ensure Mubarak is removed.

Re: Egypt – Outrageous killings of peaceful protestors by Police

I am writing to you to express my deep concern and outrage over the killing of the peaceful protesters by the police. Protesters in Egypt are calling on the president to step down and the government to be dismissed.

More than 300 people were killed and thousands have been injured over the last week.

In his speech to the people on February1, 2011, Mubarak warned anti-government protesters of clashes that will erupt if the protests were to continue.

The next morning severe clashes erupted as the pro-Mubarak supporters attacked the peaceful protestors at Tahrir Square, downtown Cairo.

I urge you to take every possible action and use your influence in the international community to impose pressures on Mubarak and call on him to step down in order to maintain peace and stability in the country and to end the blood shed.

This is a matter of utmost urgency.