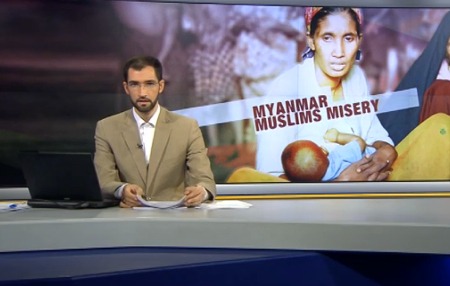 Facebook
Twitter
LinkedIn
WhatsApp
Email
Press TV has conducted an Interview with Massoud Shadjareh, head of Islamic Human Rights Commission in London. The following is an approximate transcript of the interview.

Press TV: Mr. Shadjareh, why is it that when it comes to issues such as Syria, we have the US and its allies being very vocal about the case there? And with the case of Myanmar and the mostly persecuted Muslim community there, we see silence by these very same countries who call themselves the so-called sponsors of human rights?

Shadjareh: … I mean, there is this double standard. I mean they are very clearly being sort of on one side. Every effort is going in to arming the oppositions, the sort of political support in the international community at the UN and all pressures are being put on Syria.

In this case, you know one tenth or even one twentieth of that sort of pressure would resolve the problem and no political will is there to do anything. The reality is that we are getting reports, only two weeks ago, one of our colleagues exposed sort of systematic rape of the Muslim women by the juntas and their army officers; they have actually captured some Muslims and are systematically raping them.

We are seeing Muslims are being [set alive] in front of the police officers and nothing is being done and the international community is totally absolutely silent and the silence is deafening and the reality is that Muslims and ethnic cleansing in Myanmar and Muslims are suffering and not just because of the atrocities committed by the authorities and the monks but by the fact that [they are silent there and the silence is from the western governments].

Press TV: And it is interesting that we have been told the Buddhists are peaceful people but in this case, we have seen the opposite.

Shadjareh: You know, the fact of the matter is that these Buddhists are being sort of encouraged. There is a whole wave of movement in former Burma to create a new identity there and you know this is at the expenses of the Muslims.