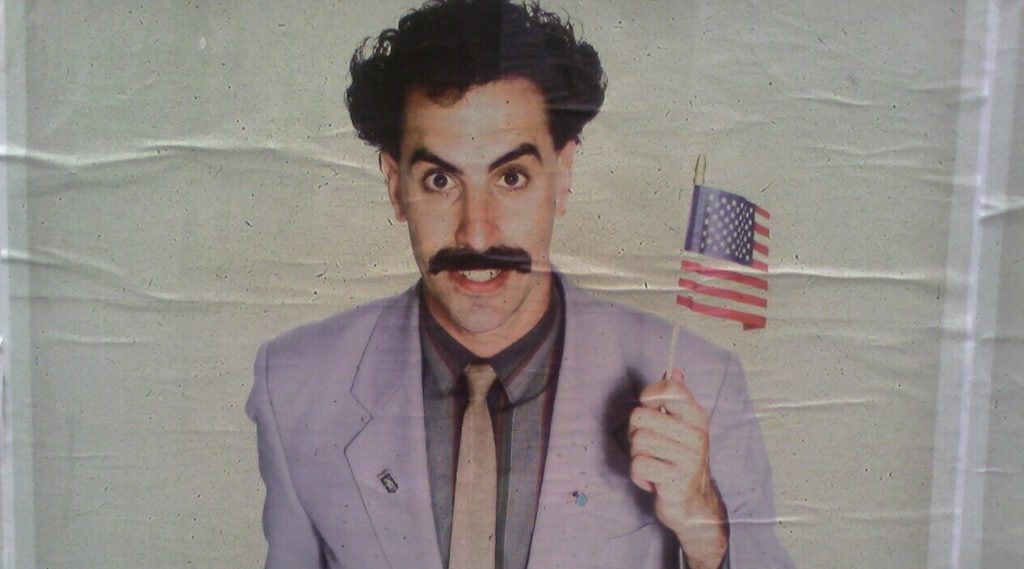 This tweet from the Decolonial Atlas made my day.

Two of history’s most consequential events were the domestications of the horse and the apple. Both happened in Kazakhstan.

I had managed to pass through my life thus far without having seen a clip (bar bits caught in trailers and ads whilst watching the TV) of Borat – the comedy character created by Sacha Baron Cohen more than a decade ago.  It had been a deliberate act of avoidance.  Baron Cohen’s earlier creation ‘Ali G’, had already riled me.  Unable to buck the trend of racist and Islamophobic representation, for a long while, I just chose to stop consuming it.  I had written enough about it.  What more could I do?

I am not sure what I was doing or even expecting when I started to stream ‘Borat: Subsequent Movie’ last night.  Everyone was talking about it.  The ‘set-up’ of Rudy Giuliani and the promised expose of right-wing mores in the USA had gripped, I guess, some sort of liberal consciousness in wider society.  People loved it.  Intelligent, progressive people.  At home we decided to try.

Those of us old enough to remember TV comedies like Love Thy Neighbour, Till Death us Do Part and Mind Your Language might have expected a funny accented, badly dressed, backward thinking ‘foreigner’ stereotype.  Basically Citizen Khan from Kazakhstan.  This was not even close.  I didn’t know there could be so much racist representation squeezed into so little time.  It’s almost a day later and I still feel actually sick in my stomach at what I saw.

Borat finds himself unwillingly on his journey physically and metaphorically, with his ‘non-male son’ i.e. his 15 year old daughter Tutar.  He despises her.  He wants to present her as a gift (read pimp her) to Vice-President Mike Pence, the story of which becomes this not so hilarious trip into rightwards leaning white Americans’ thoughts on gender, sex and a woman’s place.  En route we see Borat with Tutar (bescarved just once in the film) at the hairdressers.  The stylist asks her to show her hair. With requisite simpleton smile, she lifts her skirt to show spurts of pubic growth.  Read Muslim woman stupid, ugly.

This is just one of the many examples of the Muslim woman with stunted sexuality trope.  Instead of being a foil to the worrying beliefs shown in the US, she is very much part of the fabric of the film’s narrative.  It explains the ideas and beliefs found in the US thus: “What’s wrong with the US is that they are as bad as this.”  If Borat was not representative of the unhuman ‘other’, the comparison would be meaningless.

Exhibit B:  Corruption, criminality (of the petty and ‘against humanity’ scales) and general calumny

The extreme human rights violations that sees a man put in a hard labour camp for making a movie (Borat is at the start of this a prisoner of conscience) are matched throughout by the corruption of a regime that wants him to prostitute his daughter in the service of Kazakh honour (yes, you did read that right) and culminate in the biggest criminal conspiracy of the moment.  The creation and spread of coronavirus.  In this film, COVID-19 is the project of the simultaneously stupid, innately immoral, yet scientifically sinister Kazakh regime.

I guess I should have said SPOLIERS at the outset.  Sorry (not).

Borat – and all he represents – is an anti-Semite.  Muslims as anti-Semites?  This has been written about too much to be repeated here.  It’s an old and tired cliché, much as Borat is.  Yet both persist.  Dressed as the stereotypical Jew of his imagination, he enters a synagogue and is confronted by a congregant who patiently and kindly explains to him (unbeknownst to her that this is a prank of sorts) the folly of his ways.  She is one of two sympathetic Americans found in the movie. It is heartbreaking to hear her explain the Holocaust is real and she is a survivor.  Borat has succumbed to the US conspiracy theory during his sojourn, that the Shoah was a hoax.  This upset him deeply because in Kazakhstan, they celebrate Holocaust Memorial Day – specifically the Kazakh role in perpetrating it.  Yes, you read that correctly.  Borat is thus overjoyed.  Why this endless dehumanisation of Muslims?  Why this cruelty to a Holocaust survivor?

The other sympathetic character in the film is an African American woman, whose advice to Tutar and reprehension of Borat culminate in the ‘salvation’ of both.  Tutar is liberated (she is transformed into a sexy, bodycon wearing, red lipsticked pouting feminist, who chooses to prostitute herself (yes, you read that right) to Rudy Giuliani.  Borat learns that he loves his daughter more than his sons, that he shouldn’t pimp her and asks her to stay in the US where she will be free.  The US.  The self-same country the movie mocks for its increasingly ‘conservative’ tendencies.  What then of Kazakhstan real and trope, and all (of whom) it represents?  Well, it becomes a feminist country.  This journey – precipitated by an American woman of colour – I guess, is supposed to show the film’s anti-racism.

I guess that’s what makes so many people feel better about this.  As we all watch the (white) US descend into paranoia and hatred, this type of mockery provides light relief, safe in the understanding that we are above the racism.  But actually we are not and this device does not save the film from being at heart a sophisticated version of what it claims to expose.  This should be self-evident.  As I said in my own tweet last night, the fact that it isn’t is terrifying.

Despite this, today, I am optimistic. I sign off with apples and horses.  That is the Kazakhstan, and the actual world history, that can save all of us from this repetitious cycle of demonisation and dehumanisation.  Thank you @DecolonialAtlas.