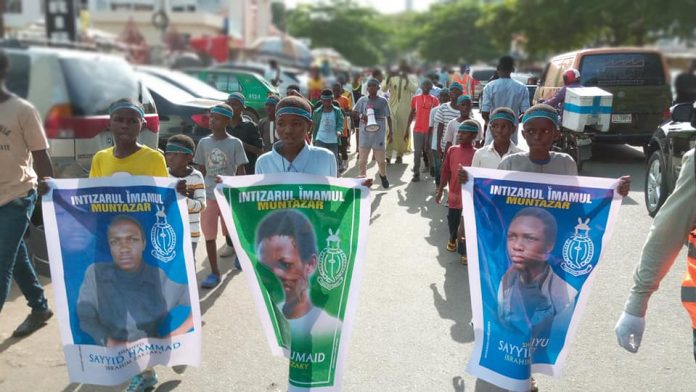 #FreeZakzaky protests continued this week as once again Nigerian Army opened fire on peaceful protesters. During this week IHRC submitted a report to UN highlighting systematic state abuse in the authorities’ treatment of the country’s Islamic Movement.

Click here to watch the weekly message from IHRC chair Masoud Shadjerah about our fundraising and campaigning for the Islamic Movement of Nigeria. Please donate to support the victims of violence here.

Sheikh Zakzaky’s Case: President Buhari Goes For Further Instructions Under Umrah Pretence
15 May 2019
President Muhammadu Buhari is reportedly going to Saudi Arabia for further instructions over what further to do with what they term the “knotty” issue of the leader of the Islamic Movement in Nigeria, Sheikh Ibraheem Zakzaky. However, he is going under the pretense of accepting the invitation of King Salman Bin Abdulaziz, the ruler of Saudi Arabia to perform the Umrah (lesser pilgrimage) in the Kingdom.
Saudi Crown Prince had in April last year caused a stir when he divulged that his country was responsible for the heinous Zaria massacre and the continuing plight of Sheikh Zakzaky during a visit to the USA. Click here to read the full story.

Free Zakzaky Protest in Abuja despite fasting
14 May 2019

Fresh Free Zakzaky protest staged in Abuja on Tuesday the 14th of May 2019.The protesters says who they will continue with their daily protest and vowed never to leave Abuja until the leader is released unconditionally

Shaikh Zakzaky has been in detention since Dec 2015 after his children and over one thousands followers were killed  in Zaria.

Several key rights in the ICCPR have been breached by the state, among them freedom of assembly, the right to a fair trial, freedom of religion and the right to life itself. Click here to read the full press release.

Thousands of free Zakzaky protesters marched in Abuja on Monday the 13th of May 2019  demanding the unconditional release of their leader and his wife. The protest kicked up from Catches Garden in Wuse Market, Abuja.

The protesters carrying placards with different inscriptions on them, called on the Nigerian Government to release the Sheikh and his wife unconditionally to have access to proper medical service abroad. They were chanting  ‘Free Zakzaky, No to Injustice and We demand Justice.