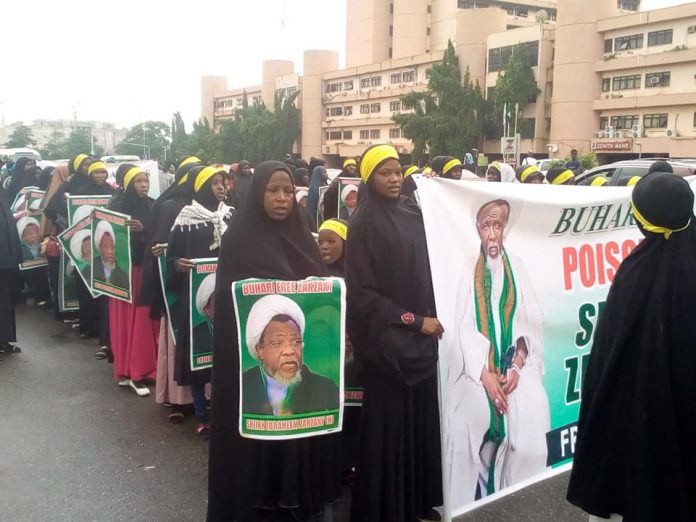 Below please find the last two weeks’  update on the Free Zakzaky campaign. Recent news of the Sheikh’s deteriorating health and high levels of lead toxicity in his body have triggered massive demonstrations across Nigeria.

Click here to watch the weekly message from IHRC chair Massoud Shadjerah about our fundraising and campaigning for those injured by police and army violence and the families of those killed. Please CLICK here for more information to support the victims of police and army brutality in Nigeria and do share the fundraising video provided. They are in urgent need of our support please DONATE here and encourage others to do the same.

We request campaigners keep the pressure on the Commonwealth Secretariat by writing emails/letters, demanding the immediate release of the Sheikh and all those unjustly imprisoned. Please forward any responses you receive to us on wajahat@ihrc.org and keep the pressure up by continuing to send follow-ups. A model letter is provided below in the Action Alert.

1. Click here to learn the five things you can do to support the Islamic Movement of Nigeria. You can donate to support the medical expenses of those recently injured by Clicking here

I look forward to hearing from you, Yours sincerely,
[Name]

Hundreds of members of the Islamic Movement in Nigeria, this night trooped out in an emergency midnight Free Zakzaky procession on learning about the increasingly deteriorating health condition of the leader.

Sheikh Zakzaky has been in DSS detention since December 2015 after the Nigerian army attacked him in his residence, severely injuring him and killing over a thousand people with him including his three sons.

He never had adequate medical treatment since then, and he suffered a stroke in January last year. That didn’t prompt the Buhari government to obey a Federal High Court that ordered the release of the ailing Sheikh.

Free Sheikh protest in the Federal Capital Abuja was staged on Thursday the 27th of June 2019 calling for the release of Sheikh Zakzaky and his wife by Brothers and Sisters.

The daily protest will not end until the Sheikh gain his freedom as the condition of the revere leader and his wife continue to deteriorate to which Buhari regime gives no concern. The daily protests which goes on for more than two years shows that protesters and peaceful despite provocation from security forces. There is not level of crackdown which can stop the peaceful protests.

Press Conference: Still On The Deteriorating Health Of Sheikh Zakzaky And His Wife
26 June 2019

The Academic Forum of the Islamic Movement in Nigeria held a press conference today 26 June 2019 at Savannah Suites Garki Abuja, below is the text of the conference for your kind publication, thank you so much.

Still On The Deteriorating Health Of Sheikh Zakzaky And His Wife On 22nd day of January, 2019, the legal counsel of Sheikh Ibraheem Zakzaky and Malama Zeenah Ibraheem made an application requesting unrestricted access to their doctors for urgent medical attention.
Subsequent to that development, the Kaduna State High Court, presided by Justice G. Kurada granted the request to allow the defendant’s chosen physicians to examine them.
Click here to read further details.

due to bullet injures when he was attacked in December 2015 by the Nigerian army. the Daily Protests have been sustained for the two years now.

A fresh Free Zakzaky Protest in Abuja on Monday the 24th of June 2019. The Protesters called for the unconditional release of Sheikh Zakzaky whose health condition requires urgent medical care.

Another massive free Sheikh Protest was staged in Lafia town, Nasarwa state, just like other cities and towns, on Friday the 21st of June 2019. The protest was peaceful and was terminated in the city centre. It started from Gabas Jumaa Mosque and terminated at Doma way along Markurdi road.

Buhari Playing With The Health Of Sheikh Zakzaky
21 June 2019
Islamic Movement in Nigeria has accused the Buhari-led Nigerian government of toying with the health situation of Sheikh Ibraheem Zakzaky. This was contained in a press release issued today as members took to the streets of towns and cities nationwide to protest against the deteriorating health condition of the Sheikh.
Friday 21/06/2019 marks exactly the day Sheikh Zakzaky and his followers spent 42 months and 10 days in illegal brutal detention. Their incarceration started on Saturday 12/12/2015, with the Zaria massacre executed by the Nigerian military. Since then we have not rested on our oars, we have been trooping out from time to time voicing our concern and disapproval of the way Buhari administration is handling this monumental tragedy of killing of 1000+ civilians in Zaria and the continued detention of our leader Sheikh Zakzaky even in the face of a high court order of his release and payment of compensation.
Click here for the full press release.

They shout different slogans as moved gently on the road. Observers greeted the protesters as they moved with courage and determination.

Another Free Sheikh Zakzaky protest rocked Abuja on Thursday the 20th of June 2019 as vehicles carrying security forces arrived at the scene. Soldiers were seen taking position in attempt to disrupt the protesters.

The peaceful protest was terminated at Federal Secretariat without hitches.  It started around 10:30am when the protesters began assembling at the frontage of the Federal Secteriate Abuja.

An hour to noon the protest kicked with a loud Saying God is great, the protesters came out from difference angles chanting Free Zakzaky.

Despite the threat from the Guard Brigade of Nigerian Army the protest paraded the three Arms Zone chanting diverse slogans demanding the unconditional release of of the Shaikh and his spouse.

Click here to read the IHRC Report “Investigating the attack against the Islamic Movement of Nigeria on 12-13 December 2015 in Zaria”, published on 21 March 2016.