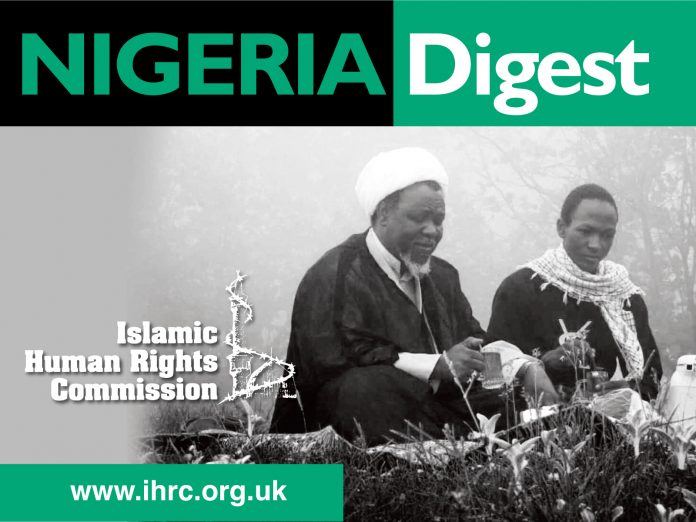 You can find all the latest actions and information as well as the background to the campaign and information, videos and audio and details on the Sheikh on the Free Zakzaky campaign page.

Introduction
We are urging campaigners to write to the African Union. 12-14 December 2020 marks the fifth anniversary of the Zaria Massacre. In the last four weeks, #FreeZakzaky protests continued in Nigeria, and on at least two occasions peaceful protesters were attacked by the Nigerian Police using tear gas and live ammunition.

Model email
If you are emailing, please use the following in the subject line:
Re: Five Years of Unlawful Detention of Sheikh Zakzaky

Re: Five Years of Unlawful Detention of Sheikh Zakzaky

Dear H.E. Mousa Faki Mahamat,
12-14 December 2020 marks the fifth anniversary of the Zaria Massacre in which the Nigerian military attacked and killed over 1000 members of the Islamic Movement. To date no military personnel have been held accountable for any of the deaths. Furthermore, during this time, the leader of the Islamic Movement Sheikh Zakzaky and his wife have been kept in detention.
A presidential amnesty on 9 of April for 2500 prisoners excluded Sheikh Zakzaky and Muallima Zeenah, and indeed other political prisoners. The Sheikh and his wife are both aged over 60 and are suffering from poor health. I am deeply concerned about the continued delays in the case.
Sheikh Zakzaky and Muallima Zeenah continue to be held in illegal detention despite a 2016 Federal High Court ruling that their detention is unlawful and unconstitutional. I urge you to apply pressure on the Nigerian authorities to secure the release of Sheikh Ibraheem Zakzaky, his wife Muallima Zeenah and other political prisoners immediately. Their continuing illegal detention in Kaduna State prison poses a high risk to their health, especially in the current COVID19 outbreak.
This is a policy that needs to be implemented quickly in Nigeria not just for the Sheikh and his wife, who both have underlying health conditions, but for all political prisoners wherever possible, for the sake of justice and also the sake of Nigerian society as a whole.
[Your name]

Protests Marked 5th Anniversary of Zaria Massacre and Illegal Detention of Sheikh
14 December 2020
Followers of Sheikh Ibraheem Zakzaky marked the 5th anniversary of #ZariaMassacre with huge protest from Wuse market to Berger Junc. in Abuja. The protesters demands the immediate & unconditional release of the Sheikh and his wife Malama Zeenah, who are in unlawful detention.

5th Anniversary of Zaria massacre: We can’t forget, let alone forgive!
11 December 2020
12-14th December, 2020 mark exactly 5 years of Zaria massacre perpetrated by bloodthirsty Nigerian army under the order and watch of Buhari regime, where they did all sort of evil and crimes against humanity. Within two days they mercilessly and inhumanely massacred over 1000+ innocent civilians for no offence. They butchered many infants and babies that knew nothing other than to be breastfed. They also set ablaze the 70+ year old senior Sister to Sheikh Zakzaky who was in dire need of water to survive.

Security Forces Fired Teargas on Protesters in Abuja
08 December 2020
Security Forces fired canisters of teargas on peaceful protesters on Tuesday the 8th of December 2020, calling for the freedom of Sheikh Ibraheem Zakzaky from illegal detention. The protest started peacefully before the attack.

IHRC is deeply concerned about the continued delays in the case against Sheikh Ibrahim el-Zakzaky and Mallimah Zeenah.  It will be nearly five years since the pair were first detained, without charge, and despite a court order demanding their release in 2016. Instead a case based on trump up charges continues to proceed at a snail’s pace despite the ailing health of both Sheikh and Mallimah.

PRESS RELEASE: NIGERIA – Sheikh Zakzaky hearing exposes contradictions in prosecution case
18 November 2020
The start of the hearing into the motion to dismiss the charges against Sheikh Ibrahim el-Zakzaky, leader of the Islamic Movement of Nigeria and his wife Mallimah Zeenah saw the prosecution bring two witnesses to the stand. Both Brigadier General SK Usman a spokesperson for the army during the Zaria massacres in 2015, and Colonel Babayo gave statements that contradicted their previous and other official statements regarding the events.

Police attack Protesters in Abuja on 5th Nov 2020
05 November 2020
Police in the Nigerian capital Abuja on Thursday the 5th of Nov 2020 opened fire on protestors calling for the release of imprisoned leader of the Islamic Movement, Sheikh Ibrahim Zakzaky, and his wife Zeenah Zakzaky. Tear gas and ammunition rained down on the peaceful protest demanding the pair’s unconditional release in line with a standing federal court order from 2016 which has never been implemented.

Click here to read an overview of the number and nature of atrocities committed by the Abacha and subsequent junta against the Muslim Brothers in Nigeria between April 1997 – September 1998. Published on 21 December 2015