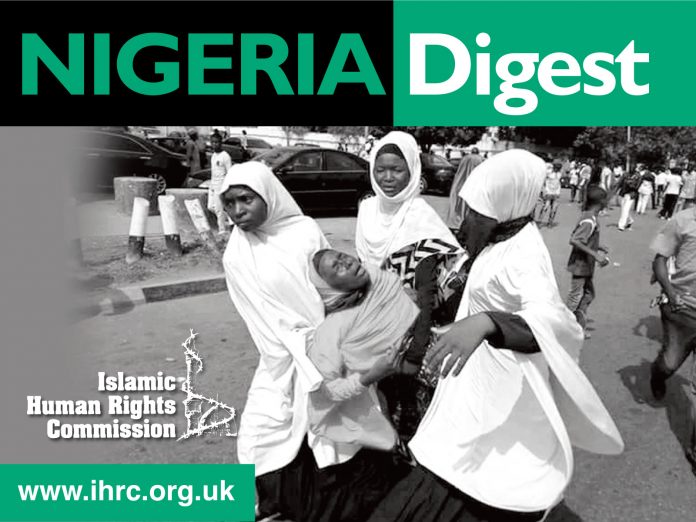 You can find all the latest actions and information as well as the background to the campaign, videos and audio at the Free Zakzaky campaign page.

Introduction
IHRC urges campaigners to Take action and write to the African Union. At least three innocent protesters were killed in last month’s #FreeZakzaky protests. Mallima Zeenah, who tested positive for Covid-19 on 20 January but was refused treatment by the authorities. On 26 January, the court ordered her to have access to hospital treatment, after Sheikh Zakzaky’s lawyers presented her positive covid test result as evidence. On the same, Police shot and killed two #FreeZakzaky protestors in the Nigerian capital. On 20 February, another innocent protester, died of gunshot wounds. He was injured during the 27 January #FreeZakzaky protest in Nigerian capital Abuja.

Please help support the urgent medical costs of those injured, and the families of those affected by the ongoing violence by donating to the IHRC Trust Nigeria Fund here.

IHRC is calling upon campaigners to write to their country’s Nigerian ambassador / High Commissioner and copy in the UN Working Group on Arbitrary Detention demanding the Nigerian authorities order the release of political prisoners immediately. A model letter is provided. Please forward any responses you receive to IHRC at wajahat@ihrc.org

Model email
If you are emailing, please use the following in the subject line:
Re: Five Years of Unlawful Detention of Sheikh Zakzaky
Dear [Insert Ambassador / High Commissioner’s name],
I am writing to ask for your urgent intervention as Mallimah Zeenah tested positive for Covid-19 last month in Kaduna state prison, where she is currently being held along with her husband, Sheikh Ibrahim el-Zakzaky.
Overcrowding in Nigeria’s jails, which currently operate at over 150 per cent of capacity, has meant that the virus has spread rapidly within the prison population. Last summer the country released 7,813 prisoners from its Correctional Service centres around the country to relieve pressure and help fight against the pandemic. Many of those released were freed under presidential pardons issued by Buhari. However, the president failed to act on a request by IHRC for the clemency to be extended to the Zakzakys.
This is all the more unacceptable given that the couple has never been convicted of any crimes and are being held unlawfully in defiance of a 2017 court order ordering their release. They have been arrested since 2015. The time they have spent in custody reinforces the view that the Nigerian authorities are conducting a witch-hunt against the couple and abusing the judicial system, hoping that they will die quietly in custody.
Given Zakzaky’s age and underlying medical conditions, the infection places him at heightened risk of severe illness or death.
I urge your office to play an active role. If anything happens to the Sheikh or his wife, the Nigerian Government will be held directly responsible. Due to the situation’s seriousness and urgency, I demand that they are immediately released from prison.
[Your name]

Click on the following link to find the name, address and contact details of the relevant diplomat in your country:
https://www.embassypages.com/nigeria

Selected names and email addresses of Ambassadors / High Commissioners can be found below.  Please contact us at info@ihrc.org if you have trouble finding the details of your country.
Please remember to also cc/ in Working Group on Arbitrary Detention, Office of the High Commissioner for Human Rights: wgad@ohchr.org

Mallam Hamisu Lambatta Attains Martyrdom
05 March 2021
The death occurred of Mallam Hamisu Lambatta, the representative of Brothers and Sisters of Lambatta village of Suleja Local Government, Niger state. He died on March 3, 2021 of injuries suffered from Police bullets. Before his death he had nursing injures for almost three years. Hamisu Lambatta was injured together with Shahid Qasim Umar Sokoto and several others on Tuesday, 9 January 2018, during a Pro Zakzaky protest in Abuja.

#FreeZakzaky Protest in Abuja Nigeria
05 March 2021
Weekly #FreeZakzaky protest staged by the followers of Sheikh Ibraheem Zakzaky (H) at Banex Plaza of Wuse II, district of FCT Abuja. Demanding for the immediate and unconditional release of the Sheikh and his wife Malama Zeenah.

Police Handed Over the Body of Shahid Muhammad Kabir Garo
01 March 2021
On Monday the 1st of March 2021 the Nigerian Security forces handed over the body of martyr Muhammad Kabir Ahmad Garo. He was declared missing since 26th of January 2021 when security forces attacked Pro Zakzaky protesters in Abuja. The Police shot him in front of National Human Right Commission building on the 26th of January and his body whisked away by the Police.

Update: By Mohammed Ibraheem Zakzaky
27 February 2021
As of yesterday, the court had given an order for my mother to be taken to a hospital. However after an inspection of all the CDC approved centers throughout Kaduna, they were all found inadequate for her specific needs; most especially due to her numerous underlying health challenges. Click here for details.

Police attack Pro- Zakzaky Protest for the third day in Abuja
27 January 2021
Pro Sheikh Zakzaky Protesters once again staged a peaceful protest at Area 1 in Abuja the Federal Capital calling for the freedom of Sheikh Zakzaky on Thursday the 28th of January 2021 . However, the Nigerian Security forces fired canisters of teargas and live ammunition on the Protesters to disperse it.

Two confirmed dead as police fire at pro-Zakzaky protestors
26 January 2021 – IHRC Press Release
Police have shot and killed two protestors in the Nigerian capital demonstrating against the continued detention of Sheikh Ibrahim el-Zakzaky and his wife Mallima Zeenah after their trial was adjourned again today. Reports from the Maitama district of Abuja say there are many wounded. Click here for details.

Mallima Zeenah transferred to hospital, case adjourned until tomorrow
25 January 2021
The trial of Sheikh Ibrahim El-Zakzaky and his wife Mallima Zeenah has been adjourned until tomorrow. Mallima Zeenah, who tested positive for Covid-19 last week, and who had not received any treatment or support from the authorities thus far, was ordered to be removed to a hospital for treatment.
Sheikh El-Zakzaky remains incarcerated in Kaduna Central prison, where his health continues to deteriorate.

IHRC urges UK Foreign Secretary to help secure Zakzakys’ release
25 January 2021
IHRC has written to the UK Foreign, Commonwealth and Development Minister Dominic Raab urging him to intervene and help secure the release the leader of the country’s Islamic Movement, Sheikh Ibrahim el-Zakzaky and his wife Mallima Zeenah and end their near six-year ordeal.

Click here to read the Ramzy Baroud article, he charts the rise of Israel’s influence on the continent. “Restoring Palestine in the Global South: Why Israel’s ‘Scramble for Africa’ Must Be Countered” Published on 03 October 2020.