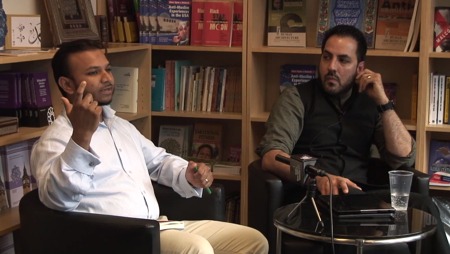 On Wednesday 05 June 2013, IHRC hosted US based academic Sohail Daulatzai for an author evening in which the discussion was centred on his latest book Black Star, Crescent Moon which can be purchased from the IHRC On-line shop here.   The audience included representatives from Sons of Malcolm and the Free Talha Ahsan Campaign group, poets, academics, artists, activists and broadcasters, with a large live online audience (www.ihrc.tv)

Daulatzai drew parallels between Black Muslims, Black radicals, and the Muslim Third World, showing how Black artists and activists imagined themselves as part of a global majority, connected to larger communities of resistance, rather than a national minority.  He notably said that ‘those that ask for peace are the ones who hold the guns and power’ and that participation in electoral process doesn’t work, highlighting the hypocrisy of the Western Imperialists and the need to consider means such as internationalisation.

The atmosphere during the Q&A session was lively with many interesting questions and comments being raised.  Numerous topics were explored including Black freedom struggles, Imperialism, Racism, Anti-Muslim hatred, American hegemony and geopolitical dominance.

The event can be watched in full below.  A gallery of photos can be found here.

Sohail Daulatzai is associate professor in the Department of Film and Media Studies and the Program in African American Studies at the University of California, Irvine.  He is co-editor of Born to Use Mics: Reading Nas’s Illmatic.

Clashes and chaos on the Colombia-Venezuela border