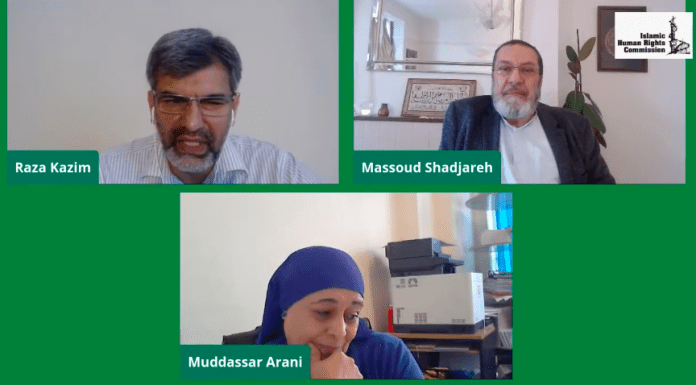 IHRC held a Know Your Rights webinar on 24 January 2021, hosted by Raza Kazim, with guest speakers Mudassar Arani, a solicitor, and Massoud Shadjareh, Chair of IHRC. People joined the live event from all over the world, with over 1,100 views on YouTube and 187 views on Facebook.

The event consisted of two parts:

Mudassar Arani discussed the purpose of Schedule 7 as a power under the Terrorism Act whereby police officers can stop and question people. Schedule 7 powers only applies to port or border areas and police officers do not give their names, only IDs.

Arani explained, the power to stop, question or detain a person does not require prior authority or any suspicion; the purpose is to determine whether a person is involved in the commission, preparation or instigation of the acts of terrorism under section 40 of the Terrorism Act. The examining officer does not need to administer caution where searches are made and there is no requirement of written notice for a search to be provided.

Arani delved into how long someone can be kept for questioning or detained by officers, when officers are allowed to use reasonable force, what can result in a prison sentence, what documentation must be given for identification, what personal details are kept, which devices and belongings are searched and examined and downloaded, how long property is kept for, whether the stop and search constitute as a criminal record, what other details are collected such as fingerprints, women removing headscarves under detention and much more. Arani also advised what rights people have if they are legally detained under schedule 7, such as requesting legal advice and when to make a complaint.

A practical piece of advice Arani offered was to not carry everything when you travel and to avoid having personal photographs [on devices], especially Muslim women who cover their hair.

Massoud Shadjareh shares his experience of when an accountability board was set up by the police and Home Office to overlook powers of Schedule 7, which he describes as the beginning of powers extensively and disproportionately being used. This committee was chaired by head of the border control officer, and it had people from a variety of police structures which were meeting up regularly to discuss the statistics and processes. This board was dismantled when the Conservatives came into power. Upon looking at statistics, the overwhelming majority of Schedule 7 practices are done on the way into the UK. Very rarely are Schedule 7 laws practised when people are leaving the UK. Furthermore, Shadjareh mentions that the number of convictions out of thousands of Schedule 7 stops has been 00.2%, to his knowledge. As far as Shadjareh is aware, there has not been a single terrorist apprehended or act of terrorism dealt with by Schedule 7. Schedule 7 has thus become an overwhelming power given to security forces to use as intelligence gathering, which is not the purpose of the legislation. Shadjareh mphasises and gives examples  importance of legal support to understand what questions one should or should not answer.

Shadjareh also mentioned his personal experience as a victim of stop and search and comments on how IHRC has been at the forefront of this issue by supporting victims of disproportionate stop and search activities and educating people with the Know Your Rights campaign.

Both Shadjareh and Anari provide a wealth of practical advice on how to communicate with your solicitor during detention under Schedule 7, how to be prepared for such situations, repercussions if you do not comply with questioning under, whether there are exceptions for people with mental or physical disabilities and much more.

The second part of the event focused on stop and search processes.

Stop and search, on the other hand, is the power given to police to search individual/vehicle if they have reasonable ground to suspect the person is carrying illegal drugs, weapon, or something that can be used to commit crime. Arani elaborates that police officers cannot stop an individual based on gender, race or previous criminal reports. She offered a generous amount of advice on what to do during arrests, stop and search while in a vehicle, what to expect if the police want to do a thorough search of clothing, stop and search for those under the age of 17, removal of religious items, what can happen if one refuses to comply with stop and search, gaining a record of the stop and search and why obtaining this information is important.

Furthermore, Arani also explains what happens when a person is arrested under any circumstances and the processes she describes applies to any criminal act that an individual may have been arrested for. She explains arrest procedures, what the caution said by police officers mean and what is a caution plus 3 interview is.

Shadjareh discussed the disproportionality of black and ethnic minorities questioned under stop and search. He explains that due to the whole judicial process, ethnic minorities or those of a disadvantaged background end up in prison in higher numbers, in comparison to the white indigenous people. Shadjareh spoke about sitting on the stop and search panel to discuss ways of reducing this disproportionality and discrimination aspect of such powers, an issue that still needs to be tackled, as well as the need to protect individuals going through this process.

The event ended with a Q&A about various issues discussed such as having the right support and solicitors and if family members are separated during stop and search or Schedule 7 questioning.