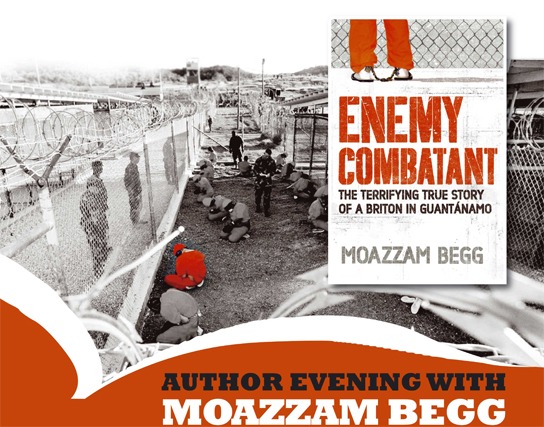 The book chronicled Begg’s upbringing and abduction and detention in Guantanamo Bay. Moazzam Begg provided an in depth insight of the US system of persecution and the endless terror of torture that he had to endure whilst in prison, the most startling of which was how the prison officers used to desecrate the Holy Quran in front of the Muslims just to get a reaction out of them.  Moazzam Begg explained how this led him to learn the chapters of the Holy Quran by heart, as he refused to have the Quran anymore in his cell if the officers were going to vandalize it.

Moazzam Begg then went on to discuss how he was finally released from prison and provided a moving account on his struggles to readjust back to life in England. This was followed by a recitation of Richard Falk’s poem Again Libya by Haneefa Sarwar which described the torment of Qaddafi and the distressing situation in the African Country.

Moazzam Begg concluded the evening with an appeal to the audience, he explained how many people including those that were arrested around the same time as him are still illegally imprisoned without trial in Guantanamo Bay and that we should all campaign for their release.

A video of the event will follow soon on the IHRC website, and video channels.  Signed copies of Enemy Combatant can be bought from the IHRC Shop here, or in-store at the IHRC bookshop.