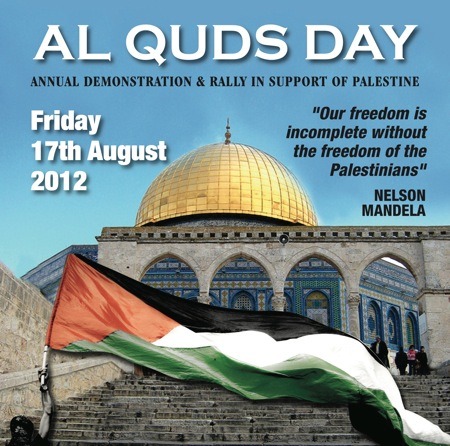 ‘End the Siege, End the Occupation, End the Israeli Apartheid…’ if these words are ever going to become a reality we have to stand united for the Palestinian cause.
Join IHRC’s annual Al Quds Day Demonstration on Friday 17 August from Portland Place (assemble near BBC Broadcasting House) at 3pm to Grosvenor Square where a rally will take place in support of Palestine, guest speakers including Lauren Booth, John Rees national Officer of the Stop the War Coalition and Massoud Shadjareh Chairman of IHRC will speak out  in support of the oppressed people of Palestine.
Stand up for Justice; support Al Quds Day by doing the following:
For more information, please contact hanin@ihrc.org or luqman@ihrc.org
Supporting Organizations for the Al Quds Demonstration include:
Please visit the Al Quds Day page for further information here
Date: 17 August 2012 (Friday)
Time: 3.00pm – 6.30pm
Venue: Portland Place (near BBC Radio just off Duchess Street) from 2pm to Grosvenor Square
Nearest train / tube: Regents Park (Bakerloo), Great Portland Street (Metropolitan), Euston Square (Metropolitan) & Euston Station (Northern, London Over ground and national rail) 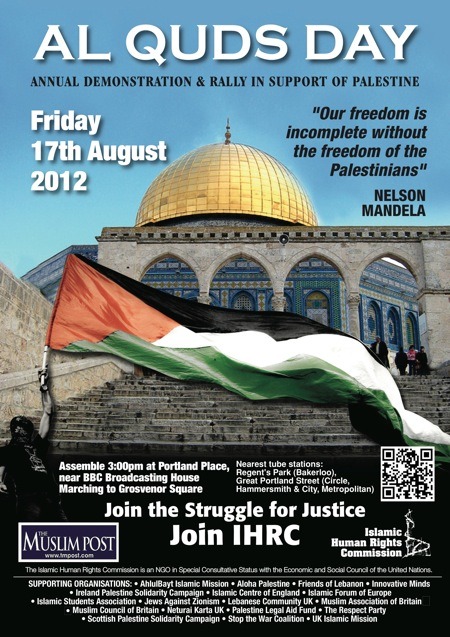