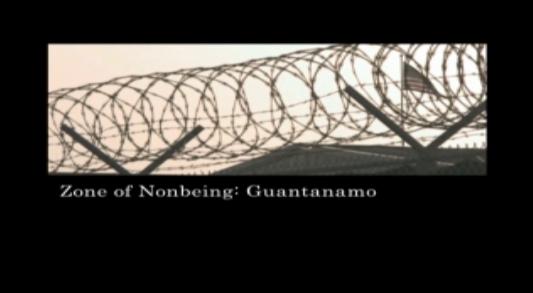 Following Donald Trump’s inauguration, IHRC will be holding a screening of its upcoming film ‘Zone of Non-Being: Guantanamo’ to review the Obama administration’s handling of the notorious camp and to discuss what the future holds.

There will be a Q&A discussion with a panel which will be broadcast live from approximately 7.30pm GMT on IHRC.TV
You can interact with the panel and ask questions via twitter @ihrc or posting on our FB page
About the film
‘Zone of Non-Being: Guantanamo’ looks at how the process of Guantanamisation has taken place over the last decade in the USA, and through US and allied foreign policy from the introduction of the NDAA to the use of drones. It argues that rather than being the exceptional event of the so-called War on Terror, Guantanamo is a continuation of a colonial policy that runs from 1492 and the conquest of the Americas and the destruction of Granada.
Guantanamo symbolises in a public and brutal fashion the creation of Fanon’s Zone of Non-being – ‘an extraordinarily sterile and arid region, an utterly naked declivity’ where violence reigns and those deemed non-beings are trapped by the on-going colonial process.
Contributors to the film include: Ramon Grosfoguel, Victoria Brittain, Amrit Wilson, Arun Kundnani, Clive Stafford Smith, Massoud Shadjareh, Omar Deghayes, Saifollah Mubanga, Andy Worthington, Michael Ratner