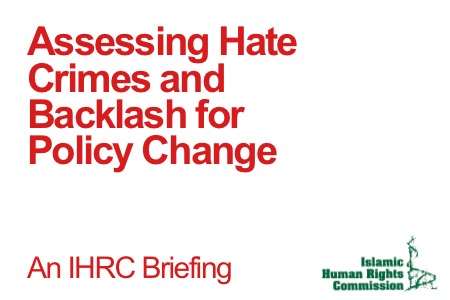 IHRC has been involved in monitoring hate crimes, discrimination and bias / hate related incidents in various setting since the organisation was founded in 1997.  The following briefing sets out an overview of established methods of data collection, our experiences as an organisation, the methods we and other civil society organisations (CSOs) have used to collect and collate reliable data and present them to policy makers, the problems posed by these methods, as well as the methods developed to fulfil clear objectives.  The primary objectives which IHRC argues for is reliable data:

(i)   To assess the scale of anti-Muslim experiences amongst Muslim communities (in the UK, France, USA and Canada)

Whilst the focus of IHRC’s work has been on anti-Muslim experiences, the issues raised in this briefing could apply to any community finding itself in a so-called minority position.

The Landscape post-Woolwich in the UK

There has been much reportage in the wake of the violent killing of a soldier in London on 22 May 2013, of the anti-Muslim backlash in the UK.  Many statistics have been presented from different organisations.  The numbers and patterns of these reports mirror closely those post 9-11 in the UK[i].  Attacks range from physical attacks on people, to symbolic attacks on mosques, as well as attacks of arson and other forms of criminal damage.  All fall into variously defined categories of hate crimes.

Whilst all recording, publicity and condemnation of such acts are essential, various problems are raised by the way the data is collected.  Additionally, a lack of critical perspective regarding what is an ongoing phenomenon is missing.  Backlash incidents since 9-11 have been catalogued in this country, as have ongoing cases of hatred by many CSOs including IHRC using different methods. Yet, in the interim there is little or no assessment of why such incidents persist or what can be done to (i) record them more efficiently (ii) implement existing mechanisms in law to prosecute those acts which are criminal (iii) set our programmes of training for law enforcers, employers, public sector institutions and other spheres to eradicate structural cultures of prejudice that discriminate and engender individual acts of discrimination (iv) look to educate society at large about prejudice and hatred.

In the UK context some advances have been made in the intervening period before 9-11 as well as between 9-11 and Woolwich but more caveats and failures to act apply to the various governments’ actions.  For example:

(iii)   The previous Labour government implemented an EU directive making religious discrimination at work impermissible in 2003 / 4.  Despite EU requirements various European countries did not meet this obligation at all or in a timely fashion.  However the contemporaneous lack of access to legal aid meant that the new law looked good on paper but was difficult to access for a potential litigant.

(iv)   Additionally, during the same period, the restructuring of the various Equalities Bodies into one Body: the Equalities and Human Rights Commission, was argued by some to relegate the issues of inter alia, race and religion (no statutory committees for either were required by the new law that created EHRC).

(v)   CSOs faced considerable problems in this period getting government and institutions to accept that anti-Muslim discrimination and hate incidents were a phenomenon that needed to be measured and dealt with.  While some law enforcement institutions made efforts to assess hate motivation in the perpetration of crimes after law changes meant that religious aggravation could be added as an aggravating factor as a charge for a criminal act, the reality on the ground was that little or no training was provided to frontline police officers in whose hands initial assessments of cases took place.

An IHRC member sat on a panel with a member of ACPO (Association of Chief Police Officers) to discuss 44 stop and search in 2006. During this discussion, the ACPO representative stated that across the country that year only 6 incidents of Islamophobic hatred had been reported to the police.  The IHRC member responded by saying that despite the extreme lack of willingness of Muslims to report even to third party organisations, the number of incidents received at the IHRC office that week alone had exceeded 6.  When official figures from the police are so low, there is no serious action taken on these issues.

The culmination of these problems is the reproduction of the idea that UK is a post-racial society[iii], where structural racism(s) no longer exist and where racism, when it does manifest itself, does so in the acts of random individuals, or those affiliated with the far-right.  Additionally it reduces the issue of hate crimes and discrimination to a numbers game – which community suffers more in any given year.  Not only is this ‘competition’ narrative a deeply divisive one, it also promotes inequality in that monitoring in some communities e.g. the Muslim community which is large and which lacks resources, cannot produce consistent and representative statistics on a regular basis.

Underreporting.  Repeated studies have shown that the majority of victims of hate crimes and discrimination in the Muslim community and amongst many other minority groups, do not report their experiences.  The reasons for this include disillusion with law enforcement agencies as uninterested, as well as fear of double discrimination (IHRC, 2004b).  Double discrimination, as outlined by IHRC in previous work, means a fear that having reported an incident to the police or a manager, the victim is victimised once more by that agency.

In June 2004, Yassir Abdelmouttalib, a post-graduate student, was confronted by a group of youths whilst he was travelling to Friday prayers. The youths began taunting him calling him Bin Laden whilst he was travelling on a bus. On alighting the youths proceeded to pummel Yassir to the ground and used a council cleaner’s broomstick to strike his head repeatedly causing him to fall into a coma. Yassir did eventually awake from his coma but suffers disabilities as a result of the attack.  He was unable to return to his studies.  Whilst in a coma, police officers investigating the attack against him also investigated him on suspicion of terrorism.  Only one of his attackers received a custodial sentence of five and a half years.  The judge stated that there was no case of religious or racial hatred to answer.

Law enforcement agencies.  Inconsistency and lack of training as to what may be deemed religious aggravation has meant that police services and members of the CPS have over the years had an inconsistent and sometimes non-existent approach to data collection either for the sake of providing statistics or as part of case against (an) individual(s) who may be charged with a criminal act.  The foregoing example of Yassir Abdelmouttalib is indicative of where things can go substantially wrong.  Many cases from name calling, being spat at, to extreme physical attack have been reported to IHRC where, when police have been involved, key factors like the clearly stated racial or religious motivation of an assailant by the assailant is overlooked or ignored.

NGOs and CSOs.  Any number of initiatives can be cited in this regard as exemplary (see Further Reading).  However all have limitations for NGOs and CSOs regarding financial and human resources.  Put simply, independent NGOs and even those that rely solely or heavily on government funding for their projects, cannot sustain resource intense projects to collect data on an ongoing basis.  The following summarises popular methods

(vii)   Third Party Reporting.  Victims of hate crimes / discrimination are encouraged to report incidents to third parties i.e. not law enforcement, in an attempt to get those who feel marginalised from or fearful of law enforcement agencies to report their experiences.

(ix)   Case Trawling.  Seeking out reports from community members through intense outreach both physical and virtual.

All of the above require substantial and consistent funding and human resources.  Of these the latter is most labour intensive, and not one that civil society without help from government can sustain.

This makes such projects vulnerable to termination when government no longer requires it.  Given the reluctance of the UK government to fund such projects, in particular for the Muslim community, such enterprises can be counterproductive, in that they will project figures that will subsequently decreases once such project terminates, not because cases have declined, but because aggressive data collection cannot be sustained.  Despite claims that such projects exaggerate, they can in fact simply perpetuate underrepresentation.

Such methods are also is vulnerable to manipulation by government.  The current narrative of the UK as a society that has laid the demons of institutional racism to rest is one that such a tally of hate incidents data set approach can aggravate by relegating such instances to those acts carried out by violent and hateful individuals working in isolation of social mores and political structures.  The claims by the British Prime Minister in the wake of the Woolwich attacks that Britain was carrying on as normal after the incident is an example of this type of discourse.

Survey work.  The Domination Hate Model Theory developed by IHRC, tries to obviate the above problems in the following ways:

(x)   It aims to survey a representative sample of the Muslim population in whichever country the project is undertaken (UK & France 2010, USA and Canada 2012, see Further Reading below) and present statistics as a snapshot of levels of experience in the community.  For hate motivated physical attacks, in 2010 13% of Muslims in the UK surveyed said they had experience such an attack.  Whilst figures should not be extrapolated, such findings can be indicative of the level of experience across a population of almost 3 million.

(xii)   The logistical needs of such a project make it feasible for civil society groups to run, if necessary on a much smaller budget and with the potential of sustainability and credibility.

(xiii)   The methodology can provide statistics that government and law enforcement can use as a representative indicator of experiences of hatred, in particular experiences of physical attacks, and discrimination in education and work.  However by assessing other types of experience, these incidents can be placed within a structural context.  This combined with an overview of work undertaken by other organisations and academics, can provide a way forward for any agency serious about tackling hatred and discrimination.

This method and theoretical framework are also open to critique (see the latest IHRC publication in this series, 2013).  However constant academic review and input from a wide range of grassroots organisations in communities where the work is undertake, help the process of refinement and the presentation of practical and challenging recommendations e.g. the need for serious school syllabus revision in order to humanise minorities per se to children; the need for proper and standardised training of police officers to recognise and record racial / religious motivation in the perpetration of a crime; or the need for a sea change in media representation – in personnel and product – of minorities and minority issues.

IHRC remains concerned that calls by it and many other organisations and academics, for serious structural review of institutions, and long term government commitments to tackling institutional racisms, are being undermined deliberately by government agencies perpetuating the idea of a post-racial society, and inadvertently by well-meaning projects that fail to contextualise their findings or problematise their methodologies.

Getting the Message: The Recurrence of Hate Crimes in the UK, 2011 by S.R. Ameli, E.M. Ahoeei, E. Shahghasemi and M. Rahimpour (review copies available upon request)

Social Discrimination:  Across the Muslim Divide, 2004 by S.R. Ameli, Me. Elahi and A. Merali (review copies available upon request)

The Hidden Victims of September 11: The Backlash Against Muslims in the UK, September 2002

Anti-Muslim Hostility & Discrimination in the UK, 2000

Institute of Race Relations, ‘Deaths with a Known (or Suspected) Racial Element since 2000’

University of Leeds: Leeds cited in Sian, K below.

[ii] Tell MAMA cited in Half of Britain’s Mosques have been attacked after 9-11,