Join IHRC for an author evening with Aaron Winter and Aurelien Mondon for their book Reactionary Democracy: How Racism and the Populist Far Right Became Mainstream.

Democracy must be anti-racist. Any less is cowardly. Any less is reactionary. Democracy is not necessarily progressive, and will only be if we make it so. What Mondon and Winter call ‘reactionary democracy’ is the use of the concept of democracy and its associated understanding of the power to the people (demos cratos) for reactionary ends. The resurgence of racism, populism and the far right is not the result of popular demands as we are often told. It is rather the logical conclusion of the more or less conscious manipulation by the elite of the concept of ‘the people’ and the working class to push reactionary ideas. These narratives place racism as a popular demand, rather than as something encouraged and perpetuated by elites, thus exonerating those with the means to influence and control public discourse through the media in particular. This in turn has legitimised the far right, strengthened its hand and compounded inequalities. 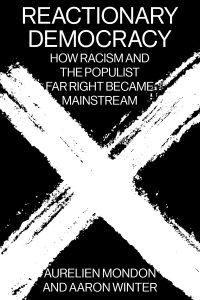 These actions diverts us away from real concerns and radical alternatives to the current system. Through a careful and thorough deconstruction of the hegemonic discourse currently preventing us from thinking beyond the liberal vs populist dichotomy, this book develops a better understanding of the systemic forces underpinning our current model and its exploitative and discriminatory basis. The book shows us that the far right would not have been able to achieve such success, either electorally or ideologically, were it not for the help of elite actors (the media, politicians and academics). While the far right is a real threat and should not be left off the hook, the authors argue that we need to shift the responsibility of the situation towards those who too often claim to be objective, and even powerless, bystanders despite their powerful standpoint and clear capacity to influence the agenda, public discourse, and narratives, particularly when they platform and legitimise racist and far right ideas and actors. 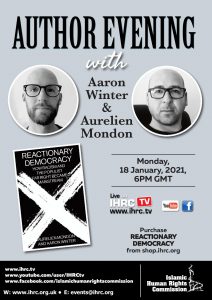 Aurelien Mondon is a Senior Lecturer in politics at the University of Bath. His research focuses predominantly on the impact of racism and populism on liberal democracies and the mainstreaming of far right politics through elite discourse. His first book, The Mainstreaming of the Extreme Right in France and Australia: A Populist Hegemony?, was published in 2013 and he recently co-edited After Charlie Hebdo: Terror, racism and free speech published with Zed. His new book Reactionary democracy: How racism and the populist far right became mainstream, co-written with Aaron Winter, is now out with Verso.

Aaron Winter is Senior Lecturer in Criminology at the University of East London. His research is on the far-right with a focus on racism, mainstreaming and violence. He is co-editor of Discourses and Practices of Terrorism: Interrogating Terror (Routledge 2010), Historical Perspectives on Organised Crime and Terrorism (Routledge 2018) and Researching the Far Right: Theory, Method and Practice (Routledge 2020), and co-author with Aurelien Mondon, of Reactionary Democracy: How Racism and the Populist Far Right Became Mainstream (Verso 2020). He is also on the editorial board of Identities: Global Studies in Culture and Power and co-editor of the Manchester University Press (MUP) book series Racism, Resistance and Social Change.