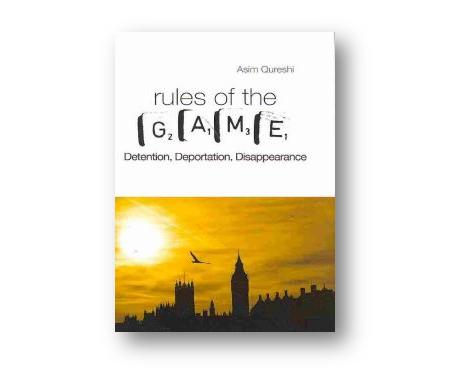 ABSTRACT
Following the 2005 bombing of London’s transport infrastructure, Tony Blair declared that “the rules of the game have changed.” Few anticipated the extent to which global counterterrorism would circumvent cherished laws, but profiling, incommunicado detention, rendition, and torture have become the accepted protocols of national security. In this book, Asim Qureshi travels to East Africa, Sudan, Pakistan, Bosnia, and the United States to record the testimonies of victims caught in counterterrorism’s new game.

Qureshi’s exhaustive efforts reveal the larger phenomenon that has changed the way governments view justice. He focuses on the profiling of Muslims by security services and concurrent mass arrests; detaining individuals without filing charges; domestic detention policies in North America; and the effect of Guantánamo on global perceptions of law and imprisonment.

Asim Qureshi is the senior researcher for Cageprisoners and with his team has published numerous reports on the use of unlawful detention, rendition, and torture in the “War on Terror.”

Recommendations
“Asim Qureshi’s meticulous research has produced a book which gives the widest picture yet of the impact of 9/11 on the destruction of fundamental human rights and legal norms by the most powerful of Western politicians. His story is a horrifying one, but his sober tone makes it possible to follow him and the tormented Muslim men he has spoken to, from Bosnia to Pakistan, from Egypt to Syria, and even further afield, into an area of lawlessness, lies, torture, and degradation that no one who has not lived it can imagine. The importance of this scholarly book and the years of recording and reporting that have gone into it, is that it tells a story of what has happened to our civilization. No one can afford not to know these things.”

“Before the September 11th attacks, who would have imagined that the foremost opponents of human rights abuse and injustice would degenerate into become advocates and practitioners of torture? And yet, imprisonment without charge or trial, extraordinary rendition, enforced disappearance, ghost prisons, water-boarding, degrading and inhumane treatment are all instruments in the arsenal justified under the US led – and British-backed – ‘War on Terror’. What Asim Qureshi has most aptly detailed in these pages is the lengths to which the rules of this very dangerous game have spanned continents and permanently changed societies, particularly ones that once boasted – as part of their heritage – how no man would be wronged in their land.”

“This is an important book on a subject that is crucial to the rather frightening era we are living through. Asim Qureshi writes from a knowledge as deep as anyone in the field. A must read.”

“Rules of the Game thoughtfully highlights aspects of our modern historical narrative that the ‘war on terror’ discussions have long-neglected. Qureshi’s survey of practices in multiple nations offers an insightful overview of the global impact of international human rights violations against the Muslim diaspora. More importantly, Rules of the Game offers first-person portraits of the impact of these violations not only by the Muslim men who survived these practices, but also the women who husbands disappeared, children whose fathers were wrongfully detained, and parents whose sons have been abused. Qureshi reminds us that international human rights are not simply abstract principles, but concrete safeguards designed to protect individuals and communities from the abuse of Executive power.”

[ Gitanjali Gutierrez, US attorney for Guantanamo detainees at the Center for Constitutional Rights ]

For more recommendations and details of the book visit The Rules of the Game homepage.