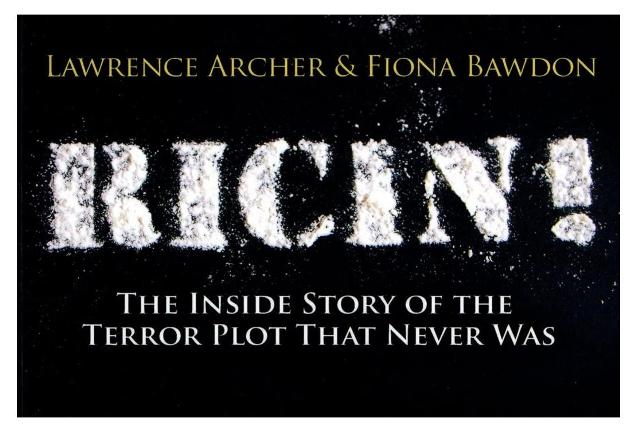 Ricin! The Inside Story of the Terror Plot That Never Was

A refreshing insight into how the government and security services shamelessly seized on an alleged conspiracy to promote their “war on terror”. … The plot never existed and no ricin was found. This is an inside story of a six month trial which provides valuable lessons, not least to budding members of MI5 and the police.

In January 2003, the British media splashed the news that anti-terror police had disrupted an Al-Qaeda cell, poised to unleash the deadly poison ricin on the capital. Police had reportedly found traces of ricin, as well as a panoply of bomb and poison-making equipment in the cell’s ‘factory of death’ – a shabby flat in north London. ‘This danger is present and real, and with us now’ announced prime minister Tony Blair.

But, when the ‘ricin plot’ came to trial at the Old Bailey, a very different story emerged: there was no ricin and no sophisticated plot. Rarely has a legal case been so shamelessly distorted by government, media and security forces to push their own ‘tough on terror’ agendas. In this meticulously researched and compellingly written book, Lawrence Archer, the jury foreman at the trial, and journalist Fiona Bawdon, give the definitive story of the ricin plot, the trial and its aftermath.

About The Author
Lawrence Archer is the telecoms engineer who was foreman of the jury at the 2005 ricin trial. He has followed the lives of the acquitted defendants ever since, including attending their High Court and immigration appeal hearings.

Fiona Bawdon is a freelance journalist. She writes on criminal and civil justice issues for the national and specialist legal press.

Michael Mansfield QC is an English barrister specialising in criminal defence work. He has often worked to overturn miscarriages of justice, including the wrongful imprisonment of both the Guildford Four and the Birmingham Six. He represented one of the acquitted defendants in the Ricin trial.

Reviews
This is a praiseworthy example of a jury, better placed than anyone else to know what really goes on in our criminal justice system, exposing how injustice occurs when fear of terrorism distorts the objectivity of the prosecution process.
(Sir Geoffrey Bindman, civil liberties solicitor)

The innocent suspects in Archer’s shocking but highly insightful book live in a world of deep suspicion. This world is prepared to utilise information extracted under torture, to inflate and conflate the threat of terrorism with immigration concerns and, to justify a war of occupation in response to a terrorist plot that only ever existed in the imagination of a government – a government that lied to its own people and forgot to admit it. It is left up to decent men like Lawrence Archer to help pick up the pieces of the lives shattered by this unjust process.
(Moazzam Begg, Director of Cageprisoners)

Gripping! I couldn’t put it down. In telling it like it is, Lawrence Archer and Fiona Bawdon have provided some reparation to the innocent Algerians caught up in one of the UK’s most controversial anti-terrorist trials. These Algerians are still fighting to this day to establish that they are not the ‘enemy aliens’ of popular myth, but impoverished exiles struggling to survive in a crushing, hostile world.
(Liz Fekete, author of A Suitable Enemy: Racism, Migration and Islamophobia in Europe (Pluto Press, 2009))