Bahrain: Bissioni acted as a lawyer and was economic with the truth; more martyrs fall

Home
Campaigns
Bahrain
Bahrain: Bissioni acted as a lawyer and was economic with the truth; more martyrs fall 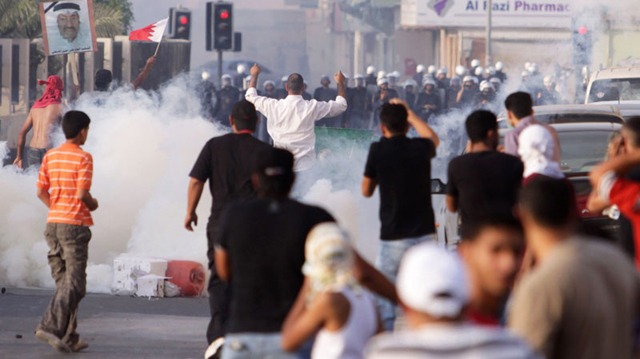 The United State and Britain have been urged to take an immediate action to indict Bahrain’s ruler after a report he had financed found his regime guilty of excessive use of force, torture and sexual assaults on prisoners.

The two countries are the main allies of the Al Khalifa ruling family and can use political weight to convince Moreno Ocampo to start proceedings against Bahrain’s dictator, his son, Nasser and his uncle the prime minister, as they had done in the case of Libya and Sudan.

The report was published yesterday by the head of the government-formed and financed commission headed by Cherif Bissiouni, who, in the past, had only headed independent and impartial investigation missions.

The commission that included senior human rights figures like Nigel Rodley, the former UN Special Rapporteur on torture, has been accused of acting on orders of the royal court; especially after its chairman issued several statements in support of the dictator. Its findings have fallen short of giving the whole truth especially after they had been “sexed up” by various actors in an attempt to shift the blame away from its main financier, the ruler and his immediate entourage.

Despite highlighting the excessive use of force, systematic torture including beating, electric shocks, deprivation of sleep, sexual assault and hanging from hands and feet, the report did not apportion the blame on the main people in powert.

According to international laws and conventions, those who are in a position to order, stop or know of the use of torture or issue orders to kill are guilty of crimes against humanity. The report was described by opposition figures as a “great disappointment”, “economic with the truth”, “too little too late”.

Mr Bissiouni was said to have acted as a “lawyer” defending the regime while admitting some of its crimes and not as an independent investigator or a neutral judge. While admitting that Iran had no role in fomenting the revolution, he also absolved the Saudi invading troops of responsibility of any crime despite irrefutable evidence suggesting otherwise.

The report also failed to lay the basis of any prosecution of torturers or killers and did not call for the immediate release of the Bahrainis who are being held in torture chambers for expressing their peaceful expression of opinion.

The report was issued on the day that another martyr was killed. Abdul Nabi Kadhem, 44, from Aali Town was fatally wounded when his car was intentionally hit by fast-moving police vehicle, forcing him to collide with a standing wall of a building. People were outraged by this crime to the extent that they shrugged off any suggestion that the Bissiouni report would make any difference to the dictatorial rule of the Al Khalifa.

Last Saturday 19th November, another young Bahraini boy was intentionally and fatally hit by a police car on the pavement in Sitra. The vehicle ran him over more than once, according to eyewitnesses and prevented anyone approaching the crime site, using tear gas and rubber bullets to disperse the crowds. On the final day of his mourning, force was used excessively against those who had attended his grave for final farewell. Several people were injured by rubber bullets and shotguns. One boy from Sitra, Abdulla Hussain, is still fighting for his life after inhaling excessive amounts of chemical and tear gases used by security forces.

Meanwhile the country has been plunged into more revolutionary demonstrations and protests. In almost all towns and villages protests are taking place day and night. Last night, only hours after Bissiouni report was issued and the ruler’s empty promise of reforms and reconciliation, force was still being used against peaceful demonstrators who are mourning their dead. Many Bahrainis are also being arrested and tortured. Among the people arrested yesterday alone are: From Northern Sehla, Hussain Abdul Abdul Aal as he walked in the street, from Northern Sehla, From Al Markh; Sayyed Jassim Sayyed Abdul Amir at a check point.  Hussain Ali Makki from Al Dair was arrested from the street because he stopped to look at another Bahraini being kidnapped by members of the Death Squads. A boy of 12 years, Mohammad Ahmad Al Ekri was arrested from the town of Ma’amir. Isa Ahmad Yousuf Al Khazna, from Al Qurayya village, was detained as he was visiting his father’s house.

The opposition are furious that the international community are adopting a policy of extreme silence and in some cases, support of the regime. The US had said that a military deal with Bahrain had been frozen until the publication of the report. It is now hoped that the deal would be cancelled especially after the ruler had failed to take any action to halt attacks on peaceful demonstrators.