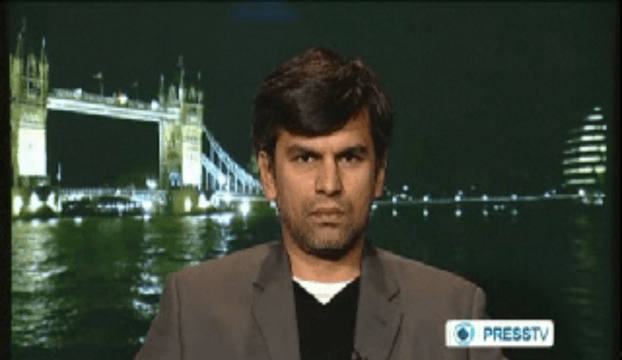 The opposition groups, led by al-Wefaq coalition, issued a statement on Sunday saying that they were in favor of “opening a serious dialogue with the regime to exit the current political crisis that is inflicting heavy losses on the country and people.

The groups said the dialogue should be focused on “implementing drastic and comprehensive political and constitutional reforms.”

Press TV talks with Raza Kazim, from the Islamic Human Rights Commission in London, to ask whether a dialog can help resolve the Bahrain crisis or not.

The video offers the opinions of two additional guests: Omar Nashabi, a judicial affairs expert and Nabeel Rajab who is the president of Bahrain Center for Human Rights. Below is the transcription of the interview.

Press TV: In the statement, the opposition groups — who did call for serious dialogue with the Manama regime — said that, “We strongly condemn the campaign of collective oppression and terrorism practiced by security forces against peaceful demonstrators.” So the question is how can dialogue even proceed
if there is an acknowledgement by both sides that this bloody crackdown is continuing?

Kazim: I think the situation becomes very difficult for this to actually continue in the way that it is actually happening. There are serious problems, not least that the British government and the American government are actually supporting the Bahraini government in what it is doing and they have been supporting it for many years, decades. Britain has a long involvement in Bahrain and this was witnessed by the fact that the King [Hamad bin Isa Al Khalifa] actually came to Britain and was hosted by the British government in the way that he was and it is quite disgusting, quite frankly, to see that these crackdowns are being continuing to be legitimized by the British government in the sense that while they say reforms is required and so on and so forth but when it comes down to the nitty-gritty of actually saying that this is something that must stop and they have the power to make the Bahrain government stop it, they are not using that power in any way, shape or form.

The reason is because they want the status quo to remain or if it is to change, change very ever so slightly so that their interest — whatever that interest happens to be, which is aligned to the Americans and so on — and their desire for power in the region is continued to be projected through this dictatorship via the king.

Press TV: Mr. Kazim, the question is with things getting from bad to worse with these pictures and footage emerging and things are becoming quite evident in the mass media now and people reporting it, how long or how far can this support go do you think from the side of for instance the Persian Gulf Cooperation Council, Saudi Arabia, Britain, the United States? How far can they go in giving the support that they are currently giving to the Bahraini regime?

Kazim: I think we need to remember that often the tunes are called for the way that these things are going to go down in Britain and in America as to what they actually want to go. In terms of the brutality of the crackdown, that aspect of it is sometimes left to the local governments to actually take care of and make sure that they did go to the extent that they wished to go to. I think they are going to have severe problems. Saudi Arabia is already experiencing serious problems, both in its eastern front and elsewhere in terms of what is actually going on.

I think that is what we really need to also look for and I think the people are rising up and I think it depends how that energy is actually channeled because there is a real fear, as we see happening in Egypt, that there is manipulation behind the scenes so that the army at the behest of the Americans, the Israelis and Britain is trying to make sure that democracy — that supposedly all of these countries want to happen in Egypt — is not actually being allowed to take place. Why is that? And I think that same thing is a problem in Bahrain and also in Saudi Arabia that those things are not actually being encouraged there.

Press TV: When we are speaking about the internal political situation here, again that question comes when the king is saying I am going to go ahead with these reforms but at the same time is continuing the crackdown and is not releasing the prisoners, is continuing with these torture cases and abuses, there is not any trust, is there? How is this political process going to go forward?

Kazim: I think it looks quite ominous that this problem and issue of rights for the people in Bahrain has been going on for many years. The latest in the form of evolution to revolution kind of idea has occurred and people are going to still want to have serious change and the more abuses that take place, there will be a need for those people that have been torturing, those people that have been beating people up on the streets to actually be brought before courts. Courts and not the kind of courts that are available in Bahrain but actually courts that are going to properly seek to mete out the justice that the Bahraini people actually deserve and will need some kind of independent judiciary to act in this situation.

Now if I can just slightly go back and one of the issues that is being promoted to actually trying to sow division within the Muslim community, within the Arab world in particular is this idea of sectarianism that Mr. Nashabi (the other guest on the show) has mentioned. It is the preferred tool that Saudi Arabia in particular and the Western governments are promoting to sow division between Shia, Sunnis, Wahhabi, whatever sect of the Muslim spectrum and it is a large spectrum that the Muslims reside in.

That division is being promoted, propagated and particularly sharp… being brought to bare and where people are actually doing that, we need to remember that whether it is by accident or whether it is by design that it is being done that people should not fall into that trap of either thinking of this as something that is of a sectarian nature and it is one community versus another. It is quite simple. We need to recognize who the oppressed is and we need to recognize who the oppressor is and we need to deal with those people quite clearly. We are not looking for Western intervention; I think it is quite clear Western intervention has created more problems. Look at Afghanistan, look at Iraq; look at Libya and I think we need to look at how we actually need to look forward in this regard.