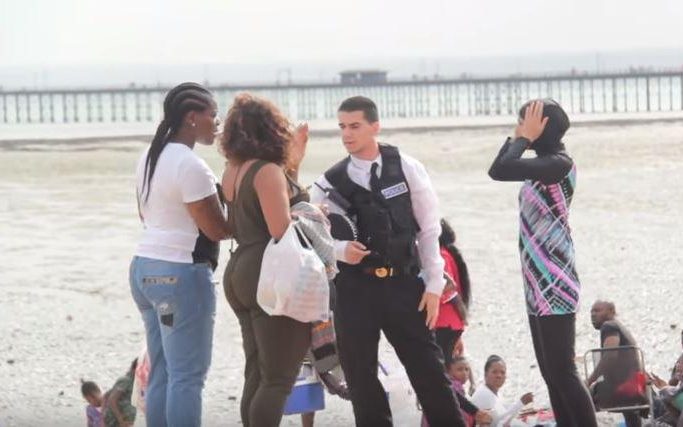 Let’s face it, outlawing the burka – it sounds very “French” really, not steadfastly free or multiculturally British. Banning stuff, especially women’s stuff (face veils, headscarves, burkinis, bikinis and G-strings) is what they do across the Channel. Yet Lisa Duffy (who?) has said she thinks burkas should be banned in the UK. An article in The Sun cites the finding of the paper’s Yougov-commissioned poll that over 60 percent of Brits agree. Almost half also want the Burkini – the top-to-toe swimwear favoured in recent years by many Muslim women and Nigella Lawson – banned.

Of course when it’s an unknown, otherised Muslim, her dress choice in The Sun’s headline is deemed to be “Islamic dress” in need of banning. When it’s a TV chef it’s a “bizarre swimsuit”. An obvious point maybe, but these days stating the truth repeatedly is much needed. Why? Because despite The Sun’s elevation of Lisa Duffy (still who?) to the nation’s agenda setter, she has little to do with this shift in “British” mores. Duffy (I had to google her) is a candidate for UKIP leader, the party which since the Brexit victory in June’s referendum on leaving the EU has been credited in shifting the British political landscape immeasurably right, apparently by simply stating over and over that Britain should leave. Would that things were so simple, and the UKIP bogey (wo)man so worthy.

Nigel Farage and the party he founded certainly played a role in shifting public opinion, but the space for what we once used to think was the far-right to imagine a future for any state does not open up without the acquiescence and often leadership of what is considered to be the mainstream. The press, politicians and even the law in combination create public opinion, and stir up public emotion. Their repetitions and mutual confirmations create the ideas, good or bad, that the rest of us internalise.

Read the rest of the article on Middle East Eye.