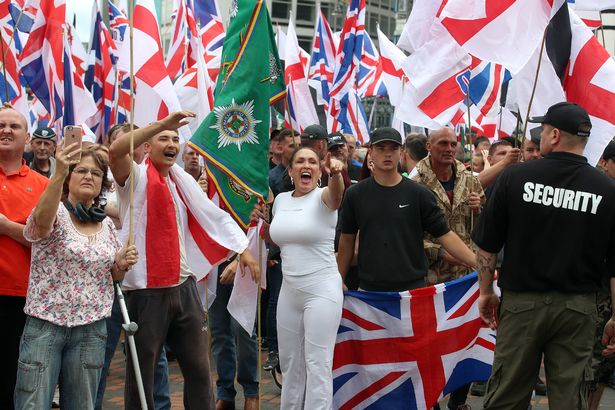 Once upon a time there was a letter and the letter was posted down the streets of Leicester, London, Sheffield, Bradford and Cardiff. Sent to Muslims in areas deemed to have high Muslim populations, its anonymous sender(s) set out a chart of who and what to attack, as well as how and then awards points for these endeavours. Thus 10 points for verbally abusing a Muslim, 25 points for pulling a headscarf off a Muslim ‘woman’ (complete with scare quotes), and 2500 points for nuking Mecca (as a friend on Facebook pointed out with dark humour, this was a tad stingy given the logistics needed to carry the latter out in comparison to the former).

All attempts to alleviate the tension aside, this is a genuinely terrifying experience for anyone who has received this, as it is for Muslim everywhere in the UK, for hate crimes have power beyond the initial victims against whom they are perpetrated. Hate crimes are message crimes i.e. they send a message of hatred to the whole community identified in that victims. Myself and Saied Reza Ameli have frequently written about it, but here’s the OCSE on the impact of individual acts of hatred:

“Hate crimes and hate-motivated incidents frequently leave victims in fear of future attacks and of increased violence. This fear comes from the rejection of the victims’ identity that is implicit in hate crimes. Additionally, hate crimes send the message that victims are not an accepted part of the society in which they [sic] isolation and greater and longer lasting fear than that experienced by other victims of crime.”

“…An unhelpful or denigrating response to victims of hate crimes can cause further harm to already traumatized people. This secondary victimization can occur, in particular, when representatives from broader society, such as police, social-service professionals, doctors or judges deny or minimize the seriousness of reported hate crimes. For many targets of hate crimes, secondary victimization leads to even greater humiliation, degradation and isolation.”

So for one hate crime, just the one, this is the impact. What then of something executed on this scale with a perverse impressiveness (note also that contrary to many forms of anti-Muslim hate mail, the writer(s) of this seems a tad more literate or at least sensible enough to get the missive proof read)?

What then is the message Muslims are being sent?

It’s worth first looking through various tweets and social media posts from people who had received or knew someone who had received such a letter. There are frequent queries as to whether this letter might be a hoax. What exactly is meant by that is unclear. How does that work? Does it then mean that sending a threatening letter without intent to actually do what has been sent in it cancels out the threat?) Is it just that the letter is so vile, there is (unbelievably) more than a modicum of disbelief? So much so, that maybe it’s easier to believe that a Muslim has done this to provoke… what exactly I am not sure. It reminds me of the many cases where victims are accused of fabricating racist harassment campaigns against themselves (see the case of Ms. Yasmin (page 54), an old IHRC advocacy case from the late 1990s as just one small example). God forbid it is ever true that this is somehow to be lain at the door of Muslims, however we need to ensure that we are not distracted from the key point here and today. That Muslims are punished everyday in their social interactions and in the their increasing vilification by state policy, law, political discourse and the media. 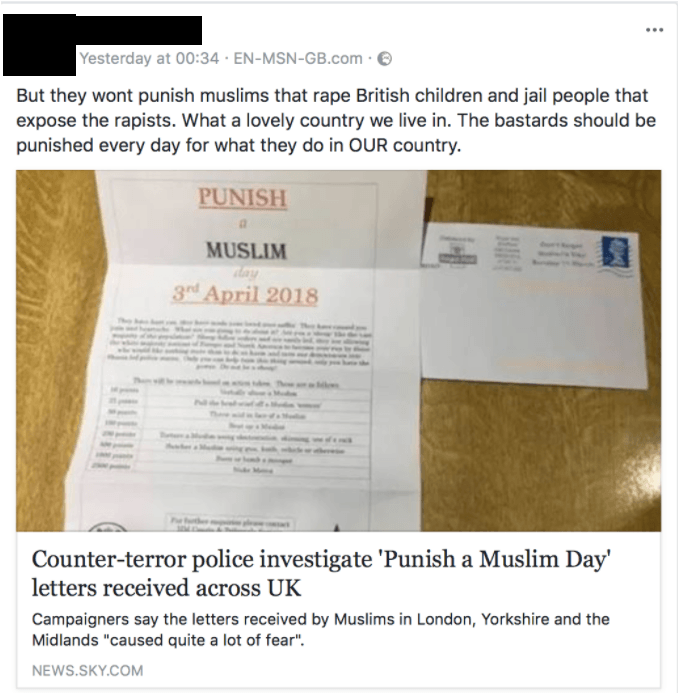 Letters or not, the IHRC survey results of 2015 showed that 18% of Muslims surveyed had experienced a violent hate attack. It doesn’t sound so dramatic except when you understand that 18% of 2.7million Muslims (if we extrapolate) means potentially that during the period covered by the survey almost 500,000 experienced a violent attack. Add to that the other types of experiences: 66% had suffered verbal abuse (a leap from 39% in 2011). Add to that the bombardment of anti-Muslim tropes via TV, newsprint, film and political narratives, and everyday is punish a Muslim day.

And punish is just the right word. Criminalised through (among other things) endless hysteria around terrorism, and latterly grooming gangs, Muslims are presented as violating the law and threatening both the safety of society and the safety of the person in this country. All the while, as the letter showed us, we are not considered human ourselves, why else put the term woman in inverted commas? Muslims are deemed guilty of crimes against the general population, and whilst the message to them is, as the OSCE points out, meant to victimise and intimidate them, there is a wider message too.

This letter is also a message to a perceived homogenous majority who are presumed will take this as permission to take the ‘law’ into their own hands. It precedes and incites violence en masse, just like Brexit has been shown to do. Even the Metropolitan police laid the catastrophic and unprecedented spike in violence against minorities at the door of the referendum result. At the time of these events, a Bosnian friend, who had lived through levels of anti-Muslim narratives of dehumanisation that resulted in genocide, described that Brexit moment – the day after – as something akin to Kristallnacht.

It’s a difficult point to make. This week’s list of Muslim punishment make that point ever more real, and sadly it find an audience.

Indeed some of it’s exhortations come straight out of the fascist playbook in terms of street attacks, updated to include things like hijab ripping and acid attacks, both of which have been employed in the targeting of Muslims in the recent past. However the calls to violence extend to electrocution, skinning and racking. Electrocution marks the Muslim experience of torture at the hands of the French in Algeria to the US in Abu Ghuraib and the many sites of the so-called War on Terror. But this is just the never-ending long history of the racking, skinning and other forms of torture of the inquisition. Some days it seems we will never escape the long 16th century.

Most chillingly this epistle exhibits what many of us have argued for a long time. That anti-Muslim hatred is institutional and operates as a form of domination. Its exhortations clearly move from what can be done on the street to what can only be (and has only been) perpetrated by the state. Bar the nuclear annihilation of Mecca, what hasn’t been done on this list already? And yet the government remains silent.

We know the power of letters in the political psyche in this country for once upon a time there was a letter, and it alleged a Trojan Horse conspiracy in UK schools, that was indeed a confirmed hoax, and yet policies, laws and retribution came aplenty. The message that you are not safe in your own homes, will and has come through the letter box. The question remains as to whether the powers that be will do anything at the despatch box.

Arzu Merali is a writer and researcher based in London. She is one of the co-founders of the Islamic Human Rights Commission (https://www.ihrc.org.uk) and co-authored its recent study Environment of Hate: The New Normal for Muslims in the UK with Saied Reza Ameli. She is currently working on the multi-partner project ‘Counter-narratives to Islamophobia Toolkit’ with the University of Leeds.