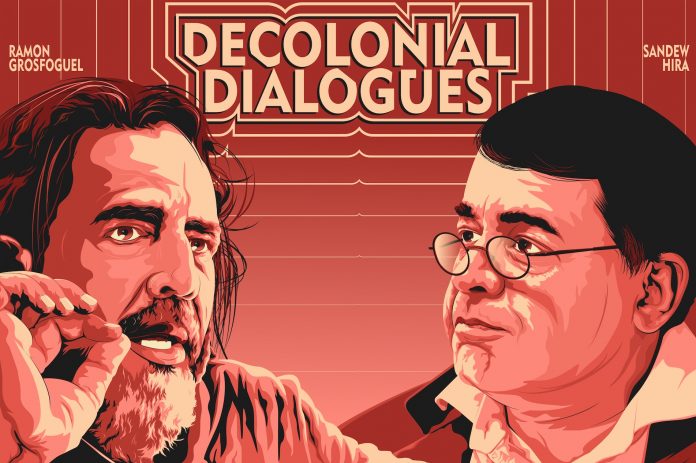 Sandew Hira’s article originally appears on the Decolonial International Network website. Please visit to get more articles from, resources of and details of the network.

The storming of Capitol Hill, the seat of the US government, on January 6 2021 by Trump supporters is a historical event that tells us a lot about where we stand in world history. Many analysts focus on the unprecedented nature of the action and the role of Donald Trump in sabotaging the American democratic system. Van Jones, a CNN political commentator, explained one of the techniques of sabotage in his TED talk titled What if a US presidential candidate refuses to concede after an election?. If Trump would decide not to concede, this might open the door to violence, which is what happened on January 6 2021.

Two months earlier, Ramon Grosfoguel and I, spent two sessions in our decolonial dialogues (session 4 and session 5) to put the 2020 presidential elections in a historical perspective. This article builds on that analysis.[article continues below the videos]

In the dominant media the storming of Capitol Hill is narrated as a crazy action of extremist followers of a lunatic president. I will argue that this event is not an incident but a rational expression of a process of the rise of an extreme right-wing political class in the USA in the context of the decline of USA as an imperial power that is willing to risk extreme violent means to stop this decline. That class is not only located in the Republican Party, but is also there in Democratic Party. The storming of Capitol Hill is just a prelude of worst things that will follow in the coming decades.

The rise of the US empire

The US empire took off after the war with Spain in 1898, whereby America got control over Cuba, Puerto Rico, Guam and the Philippines. It dealt the final blow to the Spanish empire. But much the world was still controlled by the old empires: England, France, the Netherlands, Portugal and Germany with England and France as the main protagonists. After World War II these states lost their power to the USA and became subservient to the new master of the universe.

The American empire developed an enormous economic power based initially on agriculture and industry but later more on technology. Its multinationals roamed the world for raw materials and minerals. America became the largest economy in the world. It had the highest income per capita. It had the best institutes for research and development.

With its economic power came its military and cultural power. The empire established 800 military basis across the globe. The military industrial complex in cooperation with the tech-companies built the most advanced weapons systems and infrastructure for intelligence services. They engaged in wars and military coup to crush popular resistance against imperialism and ensure the establishment of loyal regimes.

Its cultural elite in cooperation with the cultural infrastructure of media and educational institutions were successful in colonizing the mind. American textbooks are used in all westernized universities in the whole world.  American fast food and cultural icons (music, art) have become global food and global icons.

The decline of the American empire

The decline of the American empire is manifested on four terrains:

An empire in decline create a crazy world

What happens when an empire goes into decline? Basically there are two scenario’s:

We are living in the second scenario. The rise of Trump should not be seen as the rise of an individual with crazy intentions. It is the rise of a section of the ruling class, a fascist section, that is willing to go where nobody else dared to go.

Currently there are four regions in the world where the US empire is engaged in a struggle to maintain its hegemony:

In all these area the US starts actions that set fires of confrontation. There is a logic behind these actions: if all regular means of control fail, then it is legitimate to use new means that were once beyond imagination. What goes for the struggle outside of the US, also goes for the struggle in the US. That section of the ruling class in the United States that has come to the conclusion that its hegemony cannot be maintained by regular means, is now prepared to take steps that defies common imagination.

They bring new elements into the confrontation. In Venezuela they used a new form of coup d’état. Guaido declare himself an unelected president and subsequently the US empire and it vassals acknowledge this man as president. This was unheard of. A ferocious economic boycott tries to bring down the elected government. The assets of the legitimate government were seized and brought under the control of the unelected president. In West Asia the US is provoking Iran to an all-out war by killing Iran’s most beloved general: Qasem Suleimani. The US wanted Iran to start an all-out war and hoped that the murder of Suleimani would achieve that. Given the status of Suleimani it seemed unthinkable that the US would ever try to actually assassinate him. And yet they did.

Inside the US Trump – as the most outspoken segment of the fascist section – is leading the struggle under the banner “Make America Great Again”. They took control of the Republican Party. In 2016 they succeeded in gaining state power. They set in motion a series of policies that linger on the border of all-out wars, but because of the war weariness in the American population they must be careful in how far they can go. In 2020 they lost control of the government and were prepared to go where no political force in the US dared to go: to bring the possibility of war, in this civil war, to the capital of the nation in order to regain control of state power.

The storming of Capitol Hill was an outcome of the logic of ultimate confrontation. It backfired for the fascist section of the ruling class, because it failed in its objection. But the logic is still there and the processes that have created this logic are still working.

That is why I predict that the storming of Capitol Hill is a prelude of things to come that we cannot image now. For the coming years maybe things might calm down under the presidency of Biden. It will create the illusion that normalcy has been regained. But watch the underlying processes at work in the decline of the US empire. Then you will not be surprised if events unfold which we would not dare to image.

[*] Sandew Hira is secretary of the DIN Foundation. This article is based on the last chapter of his forthcoming book: Decolonizing The Mind.