Book Review – The Making and Unmaking of a Zionist: A Personal and Political Journey

Home
Uncategorized
Book Review – The Making and Unmaking of a Zionist: A Personal and Political Journey 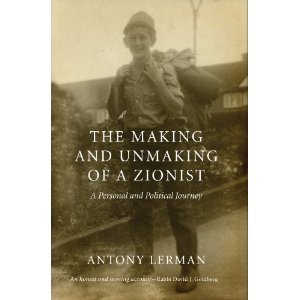 To Antony Lerman, context is everything. His book, ‘The Making and Unmaking of a Zionist’, is a thoughtful, refreshingly honest, and highly important contribution to the burgeoning texts on a seemingly irresolvable conflict fraught with despair. Lerman charts his intellectual, personal and political development from a youthful credulous socialist Zionist to a hardened, yet sincere, advocate of moral universalism, which he sees as an expression of Jewish values.

Among other sources, Lerman creates his narrative from memory, irregular diaries, published and unpublished material, letters and newspapers. He seeks to present his story to the reader devoid of creeping determinism so as “not to pretend to an awareness of the implications of what I was believing and doing that I did not possess at the time”. He then provides the desired perspective and interpretation of his experiences in the afterword.

At the start, Lerman details his membership in Habonim, a Jewish Socialist-Zionist cultural youth movement, during the formative years of his life and we are introduced to his assumption in good faith of Herzlian myths such as ‘a land [Palestine] without a people for a people without a land’. We learn of his deep involvement in youthful communal life and of his hope to realise the kibbutz dream in Israel and experience the declared intrinsic value of manual labour. This dream was realised at the age of 24, in 1970, when he moved to Israel and became a citizen. However, he soon became disenchanted with the kibbutz and with his stint in the Israeli army.

After making the aliya, Lerman risked being stigmatised as a yored (someone who goes down) and eventually returned to the UK to pursue higher education in 1972. An unsettled phase in Lerman’s life ensued and after personal loss, he applied for the role of research officer at the Institute of Jewish Affairs (IJA) “in almost unseemly haste.” This was the watershed moment that launched his career in Jewish research organisations and think-thanks, where he journeyed to the heart of the Jewish establishment.

Lerman’s first brush with the establishment occurred as a consequence of an editorial he produced in the Jewish Quarterly magazine, a publication he became involved with in 1983. The communal controversy this generated resulted in Lerman’s resignation from the editorship of the magazine, a move he later regrets. Soon after, Lerman is surprised by an invitation to cover for Philip Kleinman, who wrote a popular media column in the Jewish Chronicle, but he gleefully accepts. However, his four month period as a guest columnist proved controversial at a time when Lerman was trying to secure the directorship of the IJA.

In the 1990s, Lerman saw an opportunity to make the IJA independent and become a complete policy think tank and this was realised in the summer of 1996 under the brand name, the Institute for Jewish Policy Research (JPR).

Lerman left the JPR in December 1999 and took up a position with Yad Hanadiv, a Rothschild family foundation. He was concerned to determine the link and assess the impact of Israel and its policies on European Jewry and was looking to revitalise the diaspora. At times, he had encountered “a particularly ugly face of Israel’s attitude to diaspora Jews and the issue of antisemitism” and he found himself “at loggerheads not only with the Israeli government agency dealing with antisemitism but also with the Mossad.”

In late 2005, the trustees of the JPR were searching for a new director and Lerman agreed to put his name forward. After much consternation and hostility from high profile establishment figures, Lerman was offered the post and accepted. However, as a result of the reputation he had developed, Lerman was subjected to a sustained campaign of abuse and demonisation which continued for over three years. The constant pressure that he had to bear led him to resign as the institute’s director in November 2008 and he privately concluded that “there was no longer any point in trying to work with integrity in a world sorely lacking moral scruples.”

As one may expect, Judaism has a valuable history steeped in intellectual and scholarly debate. Jews are not a monolithic entity and the great irony is that such an essentialist, particularist picture serves the interests of the Jewish establishment as much as it serves the interests of genuine antisemites. Lerman was under no illusion as to why he was treated the way he was because it was easy to dismiss those seen as fringe dissenting groups, “but for someone who was at the heart of the community in a professional capacity for more than 25 years, was seen as part of the establishment …to hold [such] views…was an unprecedented danger, a traitorous act that simply could not be tolerated.”

Lerman draws our attention to the difficulties faced by Jews who wish or choose to speak out against Israeli policies towards Palestinians, the conflation of antisemitism with anti-Zionism and the pseudo-scholarly concept of ‘Jewish self-hatred’ which strengthens the ethnocentric view of Jews. Instead, Lerman appeals to universal principles, principles that find contemporary expression as human rights. Furthermore, with justice being the driver in Lerman’s personal journey, he appeals to knowledge that resides a priori.

Lerman’s healthy self-awareness directs us towards the human dimension and there is an appreciation in his work that we are to a large degree creatures of circumstance. This is conveyed beautifully when he comes across Ghada Karmi’s memoir, “In Search of Fatima”, a Palestinian account of the Nakba (catastrophe). After being forced from her home in Katamon, Jerusalem in 1949, Karmi found herself dispossessed and rootless in Golders Green and Lerman writes: “It was strange knowing that this person, who lived in exactly the same area as me when I was growing up, went to the same library, walked the same streets and went to the same shops and cinemas, had her life turned upside down by the very same force that attracted me and determined my life for many decades. What was for her an ill-wind bringing disaster, swept me to what I anticipated would be a brave new beginning.” In fact, elsewhere in his book, Lerman bravely confesses that the huge gap in his knowledge with respect to the Arab struggle was down to “a residual resistance to empathise with the plight of the ‘other’”.

The courage required for Lerman to write this book was far surpassed by the courage that informed his unrelenting questioning of Zionism and his refusal, for the most part, to abandon the dictates of his conscience in the face of great pressure while occupying leading positions at the heart of the Jewish establishment.

You can now purchase the book from the IHRC bookshop either in-store or online here.