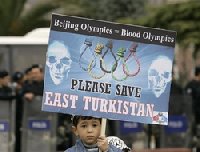 The men — Abdurahman Azat, 33, and Kurbanjan Hemit, 28 — were sentenced to death in December after being “found guilty”.

The Kashgar court said the two men had “carried out the terrorist attack” on Aug. 4 to sabotage the Beijing Olympic Games, Xinhua reported. Their execution was “publicised” at a meeting of some 4,000 officials and residents in a local stadium, it said.

On Wednesday, China also announced that two people had been sentenced to death over riots in Tibet’s regional capital Lhasa last year.