Home
Briefings
Context is key: Impropriety but not anti-Semitism 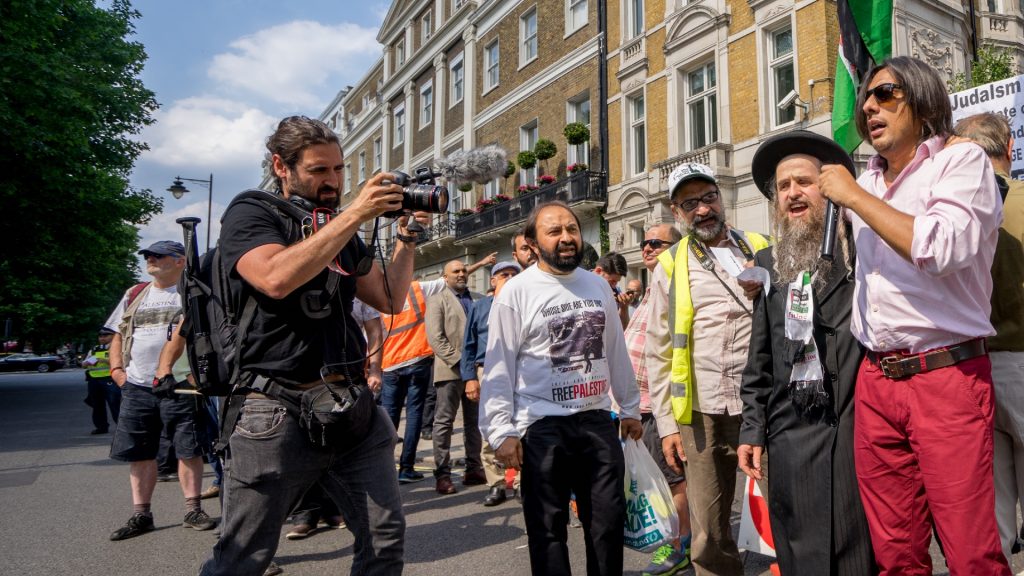 Adam Majeed is a legal journalist based in Hong Kong

Context is key. To understand the need for a summary of a determination of misconduct made by the regulator for pharmacists concerning comments made at a pro-Palestinian rally in 2017, one has to firstly understand that these proceedings represented the latest port of call in allegations against a pro-Palestinian activist that were initially dismissed by the Crown Prosecution Service (CPS), and then by the Director of Public Prosecutions (DPP) in a private prosecution, and finally by the High Court in a judicial review (Campaign Against Antisemitism v DPP [2019] EWHC 9); and secondly that in the interests of maintaining public confidence in the pharmacy profession, good behavior extends to life outside the profession. Mr Ali had not been acting in a professional capacity during the rally, but his profession as a pharmacist had been identified via social media.

The GPhC were relying on the IHRA working definition of anti-Semitism and it was submitted that such comments amounted to misconduct that adversely affected the reputation of the pharmacy profession.

The procedure for principal hearings is laid out in Rule 31 of The General Pharmaceutical (Fitness to Practise and Disqualification etc. Rules) Order of Council 2010. Rule 31(1) requires that the hearing be carried out in three stages: findings of fact; whether the facts render the registrant’s fitness to practise impaired by reason of misconduct/adverse health; and the consideration of an appropriate sanction if required.

In advance of the hearing the contesting parties provided the committee with skeleton arguments, case statements, bundles of witness statements, character references, video evidence, a copy of the High Court judicial review judgement, Articles 8 (right to respect private life) and 10 (freedom of expression) of the European Convention on Human Rights, and the IHRA working definition of anti-Semitism. During its deliberations, the committee also referred to case law, legislative and guidance documents, and the Legal Adviser supplied it with the ordinary dictionary definitions of “anti-Semitic” and “offensive”. Furthermore, at the outset the registrant admitted to having made the comments and to their offensive nature and the committee deemed these facts proved.

Crucially, the registrant had not admitted to anti-Semitism and this was to be the focus of the hearing as the GPhC began by stating that such a determination should be judged objectively by an ordinary reasonable person without any particular characteristics. The committee then heard live evidence from two witnesses—who were also cross-examined—and shown video footage from the 2017 Al Quds rally.

The registrant then supplied live evidence offering an apology, confirming his admissions, providing context, declaring his intentions and professing his professional integrity. Mr Ali was cross-examined and asked to explain his comments to which he confirmed that not all Jews are Zionists—and vice versa—and that while Jewish persons’ ethnicity could be identified genetically, Zionists could not. He then explained his comments stating that the reference to Zionists’ genetic disposition was a figure of speech, “European alleged Jews” was nonsensical, calling some Rabbis ‘imposters’ was only in relation to legitimacy for interfaith dialogue, and that accusations relating to Grenfell’s deceased were offensive as a broad-brush measure. The registrant then had the standards for pharmacy professionals put before him by the panel.

At this juncture, Gottlieb (the registrant’s representative) put two matters before the committee in anticipation of an application for abuse of process to stay proceedings; namely, that the basis advanced by the GPhC to determine anti-Semitism was incorrect, and that to continue proceedings would be incompatible with Articles 8 and 10 of the Human Rights Act (UK’s incorporation of the Convention rights).

An abuse of process application would entail that an individual cannot receive a fair hearing and that such a hearing would constitute an affront to justice. Gottlieb argued that all the evidence considered so far had illustrated that the public interest in maintaining confidence in the profession had been safeguarded and that moving forward from now would violate the registrant’s human rights and create a chilling effect on a professional’s ability to take any meaningful part in public life, especially as there was no risk of repetition.

Colman (the GPhC’s representative) counter-argued that there had been noColman (the GPhC’s representative) counter-argued that there had been no—or even alleged—procedural irregularities thus far and that the application was solely based on purported infringements of Convention rights. There was a need to uphold public confidence in the profession and its regulation and in invoking Forz Khan v Bar Standards Board [2018] EWHC 2184 Colman argued that such an infringement was legitimate.Any risk to the registrant of misreporting or overreporting was offset by his defamation rights and Bolton v Law Society [1994] 1 WLR 512 upheld that the public interest in maintaining confidence in the profession outweighed the impact of any proceedings or regulatory action upon a registrant.

Zouq (the Legal Adviser) then set out the law for all parties highlighting that the committee needed to balance—taking all the evidence into account—the registrant’s convention rights with its aim of public protection and the wider public interest. It reminded the committee that good behavior extends to life outside the profession and that the burden to establish abuse of process was on the registrant with “balance of probabilities” being the standard of proof.

The committee eventually rejected the application stating that on the balance of probabilities the test for an abuse of process to stay proceedings had not been met.

At this point, just before the committee invited the parties to make closing submissions on the facts, there was some confusion as to whether the registrant had applied to amend the allegations. This would be to the effect of modifying the phrasing that the comments “were” anti-Semitic to one where the comments “were capable of being interpreted” as anti-Semitic. The Legal Adviser clarified that such an application had not been made ultimately leading Gottlieb to make a formal application that was challenged by Colman. The committee rejected this application ruling that it would constitute a material change that would prejudice the registrant and potentially lead to a chilling effect.

Finally the parties moved on to make closing submissions on the facts that revolved around critical and interesting deliberations on the standard of proof, with Colman arguing that the committee—employing the civil standard of the balance of probabilities—should decide on the basis that the admitted comments were objectively anti-Semitic, not by how they were intended by the registrant but by how they would be heard by a reasonable observer. Gottlieb argued that in coming to a decision the committee should think of “the reasonable person” as someone who was in possession of all the relevant evidence, therefore being in the same state of knowledge as the committee.

Zouq then reminded the committee of the burden and standard of proof, and the need for cogent evidence with guidance from the dictionary and IHRA definitions of anti-Semitism. The committee was advised—with public protection as the objective—to consider the registrant’s comments in the context in which they were said, having regard to all the relevant circumstances, evidence and guidance.

The committee begins by accepting the Legal Adviser’s advice in full and takes all the submissions and evidence made by both parties into account. It first addresses the live evidence supplied by the witnesses and declares this unreliable as the witnesses were deemed not wholly impartial. It then states that the registrant as a witness was truthful, remorseful and of good character.

It then addresses each of the comments in turn and settles on the meaning of “Zionists” from the relevant High Court judgement. The comment referring to Zionists’ genetic disposition was deemed highly ill-advised and capable of misinterpretation but not anti-Semitic; the comment on “European alleged Jews” was ruled as nonsensical and so incapable of being anti-Semitic and denying Zionists Jewry in context with its dual interpretations could not establish anti-Semitism; the comment stating that Zionists, Jewish supporters of Israel and Rabbis on the Board of Deputies attending “your centres” are imposters required context that admittedly a “reasonable person” would struggle to understand but would unlikely conclude it to be anti-Semitic; and finally, the comment accusing Zionist supporters of the Tory Party for the murder of Grenfell’s deceased while “grossly offensive and particularly aggravating” would not be seen as anti-Semitic by the reasonable person.

The committee then moved to consider whether the registrant was impaired by misconduct under Rule 31. The contesting parties made submissions and the Legal Adviser directed attention to Roylance v GMC (2000) 1 AC 311 and UK v GMC [2010] to establish that the misconduct must be serious and can occur outside the profession. Zouq then stated that if the committee decided that the facts proved misconduct it must then decide whether the registrant’s fitness to practise is impaired and she invoked GMC v Meadow [2006] EWCA Civ 1390 and Grant v NMC [2011] to highlight the importance of public protection and upholding public confidence.

The committee considered the matter of misconduct and concluded that the registrant’s comments amounted to serious misconduct, it then found the registrant to be impaired on grounds of public interest.

Having ruled on misconduct and impairment, the committee then considered sanctions. The contesting parties had both agreed that a warning might be par for the course, and the committee agreed relying on the Fitness to Practise Hearings and Sanctions Guidance after considering the measures incrementally, giving greater weight to the public interest than to the consequences of any sanction on the registrant.

This case highlights the importance and appropriateness of taking a contextual approach to safeguard justice rather than relying on a purported objective standard of strict liability. This is particularly so with regard to highly sensitive topics where there is a need to protect legitimate freedom of expression—even strident political discourse—against the risks of conflation with irrational hostility, discrimination and prejudice.