Democracy as Domination: Myanmar, Muslims and the Push for Ethnic Hegemony

Home
Comment
Democracy as Domination: Myanmar, Muslims and the Push for Ethnic Hegemony 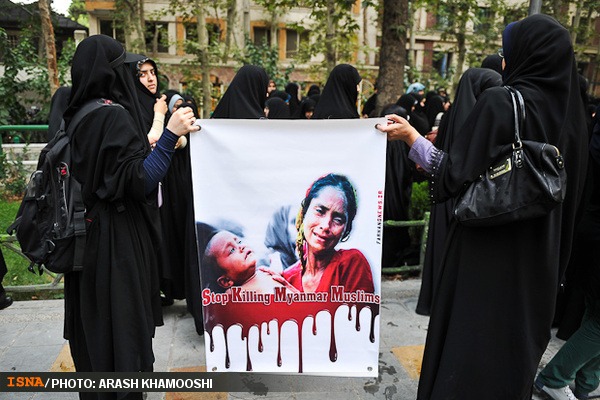 {jathumbnailoff}There are many lessons to be learned by the latest, I stress latest, violence inflicted upon Muslim peoples in Myanmar (formerly Burma).  Not least of these is the Muslim response, awaiting these many long years to be ignited in indignant rage by reporting of massacres of thousands of Rohingyas through western media outlets.  It is as the native peoples of the Americas experienced – recognition only through the ‘discovery’ of Western eyes, a brutal and violent denial of their existence let alone worth and humanity, before a coloniser’s view was turned onto them.

Perhaps more on that debacle later…  Back now to 1996, and a chance meeting I had in Khartoum with a group of Rohingyas, desperately seeking out the help and support of other Muslims during a time when ideas of the ummah (pre-the internet revolution by about 18 months) were running amazingly high.  We are all one, screamed so many sermons.  The truth, as we saw then and now, is something else.  Anyhow in my naivety, I had asked these brothers from Burma what Aung San Suu Kyi has said about their plight.  Feted as the pro-democracy leader and poster victim of SLORC, Suu Kyi’s voice was the voice heard in the West as both indictment of the junta that ruled Myanmar and hope for its post SLORC future.

“There are no Rohingyas, only Burmese,” was their report of her answer.

It echoes till today, as the new Myanmarese government clambers for unity, its model, hailed without contradiction as democracy sees the new President Thien Sein seek the expulsion of the Rohingyas, a half million strong community that has lived in Myanmar for generations, to a ‘third country’ on the basis that they are not Myanmarese or more specifically Burman.  The call has been made by his government without shame to the United Nations, as if calling for mass expulsion were the most normal and ethical thing in the world.  When Myanmar was ruled by a military junta, it was routinely criticised for its repression of its citizens.  Groups like IHRC tried to highlight and seek national and regional remedies for its treatment of minorities, of which the Rohingyas are but one of many, doubly discriminated as both religiously and ethnically different from the majority.  Myanmar’s Muslims: The Oppressed of the Oppressed , was an IHRC overview report commissioned in 2005.  Other minorities include various Muslim groups, as well as Christians, Hindus, various confessional groups from Indian heritage as well as those descended from multiple Muslim nationalities settled in what was colonial Burma.

All were suffering from a chauvinistic assertion of Theravada Buddhism and Bamar ethnicity as national identity.  This is despite the official recognition of some 135 ethnicities.  Of these the Rohingya were so drastically targeted that Minority Rights Group declared them and fellow Myanmerese Kachin, Karenni, Karen, Mons, Rakhine, Shan, Chin (Zomis) as amongst the most threatened people in the world in 2011.  Typical attacks on Rohingyas, other Muslims and other so-called minorities, including those Burman who have converted to different faiths include forced labour, refusal or delay in granting marriage permits, gang rapes and land confiscation.  The support for democracy that the West supposedly gave in its promotion of the National League for Democracy and Aung San Suu Kyi over the many years of its sometimes vitriolic condemnation of the military leadership of Burma belies a complete lack of concern with the fate of all these people, as evidenced by the lack of criticism aimed at Suu Kyi, Sein and the NLD.

Dissenting voices remain regional.  Bangladesh based NGO Odhikar highlighted the role of the expatriate Myanmarese press, ‘normally reliable’, in using demonised images and language regarding Muslims and denying, as the democratic leadership and mainstream civil society have, the idea of an indigenous Muslim presence in Myanmar.  Even the government of Bangladesh, itself yet to be held accountable for its persecution of longstanding Rohingyan refugees on its borders, and its current violence against those newly fleeing the violence, has managed to name what is happening in Myanmar as ‘ethnic cleansing’.  Iran too has raised its voice – a lonely one when it comes to responses from Muslim countries, but at least theirs is not a new concern, unlike the OIC’s freshly awakened interest.

So what to do?  And what can Muslims specifically do?  There is no easy or obvious answer, except that the Rohingyans don’t have the time or luxury for the rest of the ummah to be naive.  As Western eyes turn to Myanmar, they do so with a view to a battle for resources with and political alliances against China, as well as (re)gaining footholds in territories they were removed from.  The action we take cannot feed into these games anymore.  The ASEAN Flotilla that sailed to break the siege of Gaza is reconvening to take aid to Rohingyas on the border with Bangladesh.  A regional civil society initiative based on the work of Malaysian NGOs working with and in some cases led by Rohingyan refugees in that country, it has the benefit of understanding these agendas and with some understanding of grassroots Rohingyan issues.  The International Action Committee, comes out of the UJN Network and has been responsible for a series of  protest events, including civil society led demonstrations in Indonesia, Malaysia, India, Iran and the UK as part of the IAC’s call for an International Day of Solidarity.  In all these actions, it has been important to follow the lead of those who have better knowledge and a longstanding involvement on the ground.  Muslims need to look away from the West for solutions to its problems, and also for the (sole) locus of its knowledge, understanding and activism.

Harsh words need to be directed at the NLD, Sien and Suu Kyi.  They have been needed for a long time.  The democracy they espouse without any critique is one of majority domination to the extent of expulsion, ethnic cleansing and massacres.  Many would argue that this is the very definition of democracy, implemented to its logical conclusion i.e. oppression and extermination of those who do not form part of the so-called majority.  Militant majoritarianism is a dangerous idea that lurks in many movements claiming liberatory goals.  We still do not understand the danger of this idea.  We don’t understand, so we fail to condemn the racist and phobic democracy being imposed on Myanmar, or the internecine violence engulfing parts of the Muslim world.  We do not understand, as Hannah Arendt explained, the false pretensions of European states to be anything other than the instruments of nation and not law.  If we don’t understand that idea of democracy as the implementation of racism, we will remain surprised and confused when atrocities happen, and we will condemn them thinking they are exceptions to and not the product of the democracies implementing them.  These are the democracies that result in Nazism, this is the democratic discourse of the English Defence League, this is the democracy of the Bharata Janati Party in India as well as the NLD in Myanmar and all shades of French mainstream political organisation.

The Rohingyans were oppressed before we all recently noticed.  So were many, many others.

Our awareness can only help them, when we strive to be fully aware of what oppresses them in theory and in practice.

Arzu Merali is a writer and activist.  She is one of the founders of Islamic Human Rights Commission.  Twitter @arzumerali