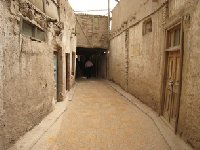 HONG KONG—Authorities in northwestern China have announced plans to redevelop an ancient area of housing in the Silk Road city of Kashgar, a major cultural center for the ethnic minority Uyghur population.

“We think that demolishing some of the residential areas of Kashgar’s old town for redevelopment is a good thing,” an official at the city’s historic Id Kah mosque said in a telephone interview.

“In many people’s minds, demolishing the old district is destroying cultural relics, but without redevelopment, people will lose more,” he added.

“Maybe you want to keep your old house, but when an earthquake strikes, many people will be buried underneath that old house,” the official said, citing the government argument that Kashgar’s labyrinthine mud-brick traditional housing is “dangerous.”

Kashgar has remained a strongly Uyghur oasis town in spite of an influx of millions of Han Chinese in recent decades of economic growth.

Many Muslim, Turkic-speaking Uyghurs feel closer to the Central Asian cultures of the Silk Road than to Beijing, and many have braved official harassment, detention, and jail sentences to advocate independence from Beijing’s rule.

Uyghurs enjoyed two brief periods of independence as the state of East Turkestan during the 1940s, before the Chinese Communist Party consolidated control over the vast, resource-rich region in the extreme west of the country.

Now, the Chinese government is launching a three-billion yuan (U.S.$440 million) urban redevelopment plan that calls for the demolition of traditional Uyghur dwellings in the heart of the old city.

“The ancient city is dangerous and has become susceptible to a serious earthquake disaster,” the Web site said, adding: “With a history of more than 1,000 years, it is under constant erosion from the elements.”

Decision made higher up

An official who answered the phone at the Kashgar Cultural Relics Office said the problem was already out of their hands.

“We are worried about the redevelopment project,” he said.

“Our job is to protect cultural relics, but preserving the old district of Kashgar is already beyond us. We can’t do anything to stop it because it is decided by policymakers.”

He said private property, which accounts for many Uyghur homes, enjoyed theoretical protection under China’s Constitution.

“But they have not taken any measures to protect it,” the official said.

Cultural archeologists say that large-scale raw earth building complexes are relatively rare and have their own architectural and cultural significance.

They are also built from low-impact local materials to be warm in winter and cold in summer.

Kashgar’s old town is also considered one of the few authentic representations left standing of the traditional Uyghur way of life, which prominent Uyghurs in exile fear will be lost if the bulldozers move into the heart of Kashgar.

The Washington-based head of the Uyghur American Association Rebiya Kadeer said the planned demolition of Kashgar’s old town was “an affront to Uyghur identity” and a bid to assimilate Uyghurs.

Kadeer said in a statement: “I lament the loss of such a unique site of world heritage, and call on people across the globe to let the Chinese government know that this demolition robs the world of an irreplaceable community.”

An official in the Kashgar Tourism Office said one of the city’s main tourist attractions would also be affected by the plan.

“The demolition of old houses will bring more uncertainty to people who live here,” he said.

“If they are going to move to another location, then what they will do for living? The housing arrangements and the traditional craftsmanship businesses are interconnected in the old district of Kashgar.”

He said relocation could seriously damage the traditional Uyghur crafts that drew tourists to visit the old town.

“If they have to move to an apartment or be relocated somewhere else, their lives and their businesses will be seriously affected,” he added.

Kadeer, 62, was once a prominent businesswoman in the Xinjiang Uyghur Autonomous Region, but was jailed in 1999 for “leaking state secrets.”

She was released and sent into exile in 2005 and has been nominated for the Nobel Prize for Peace.